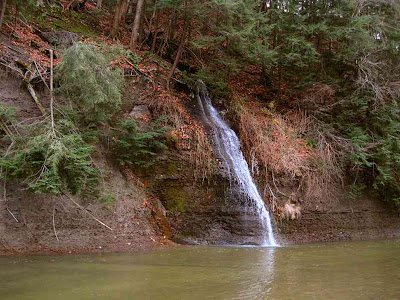 There are times when the moon and stars align and everything falls into place. The same thing can happen when comes to steelheading - especially when you go to Pennsylvania after high water and the during the week of deer hunting season. It was also my week off of work and earlier in the month I was pumped for some action. But, Mother Nature had a surprise in store for me. It rained Monday morning and I managed to squeeze in a morning of fishing before the Rock blew out. I wasn't going to let this happen and I knew plan B was the only option - heading to Pennsylvania.

The Elk got blown out Monday and I knew it would be fishable by Wednesday. Even though, in the past I have lambasted Pennsylvania for stocking too many steelhead and goofed on the locals for fishing a pod of steelhead in a pool about the size of my bathtub. Since this was my vacation, I was desperate as I was only able to fish early Monday morning.

When I arrived the river was about as perfect as you can get. The other bonus, I was the first vehicle there. During any other time, the cars would be rolling in. It was very cold at first light and I knew the fish would be packed like sardines in the deeper pools and runs. The water was slightly stained and I had two containers of my King salmon eggs raring to go.

It was odd being back in Pennsylvania after a six year hiatus. At first the fishing was slow and I didn't have any takers. The water was deep enough and I was somewhat puzzled. I drifted along the seam and nobody was home. I crossed over and moved towards the tailout. Then it was off to the races as I started to clean house. I noticed most of the anglers were heading upstream. After 20 minutes of no action, I decided to head downstream. As I walked downstream there was a sign posted by a landowner asking anglers to wear blaze orange. I had my lucky Toronto Maple Leafs cap, dark blue hoodie and sage colored waders. I scanned the trees looking for stands and found none. I remember all too well about 7 years ago when I was fishing the same section and 3 deer ran across the creek. Not too far behind was a hunter getting ready to shoot. Luckily at the last minute he spotted me. It freaked me out and I decided to high tail it out of there. Today, that section is posted by no other than the trout nazi himself - Donnie Beaver. It's a shame because there was some nice water. 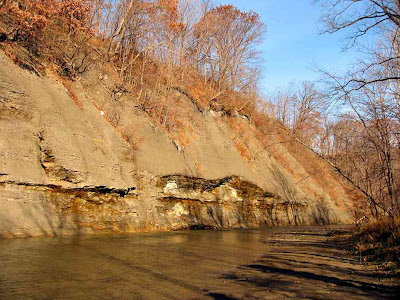 The fishing today was like a video game set at beginner level. At times, it was one fish after another and I could of made bets on consecutive hook ups and won. It was insane and at one point I couldn't stop laughing. The Elk got a great run as the majority of fish caught were fresh. A friend of mine guiding farther upstream, told me they were hammering them all day long. When the conditions are right on the Elk it's possible to land 40 to 50 fish in one day when using bait such as eggs. The stained conditions and no previous pressure benefited me. All of the fish caught came in pools about 3' to 5' deep with a moderate flow. The fish were holding in the mid to tail sections. Using the pin really helped and it's very rare to drift entire pool on the Elk without somebody pitching a fit and screaming "Pool hog!! Pinners suck!!" As the day went on, the creek started to get clearer. The previous spot I fished in the morning went from stained to green. With my polarized sunglasses, I could see bottom and darker fish were easy to spot. By tomorrow the creek will be running low and clear and the fish will also have started to smarten up.

After I exhausted my spawn sacs, I placed several sucker spawns in the jar to absorb the juice from the eggs. It worked and I started to bang holes on the way back. It turned out to be a great day - I didn't get shot at, I ran into 4 other anglers the entire day and had a boatload of fish for myself. Maybe I won't be too harsh on Pennsylvania anymore.
Posted by Greg at 5:00 PM

Congrats Greg!!! Glad you had a great day. Don't you just love it when things go from bad to good.
I'm off to my piece of Heaven tomorrow to recharge.

Are you fishing Ohio tomorrow?

Donnie Beaver the Trout Nazi??
I am sure there is a story there!
LOL
You shouldn't tell Brian about 50 fish days....he'll short out his keyboard with drool and sell his home and move there.
;o)
Tight lines