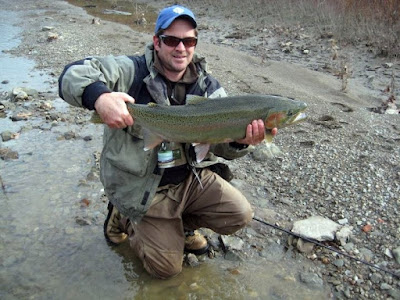 I've always considered myself to be an ethical angler. During my time in boy scouts, I first learned about appreciating and respecting the natural environment. That we were to be the stewards of the land and water for future generations to enjoy and preserve. I applied that philosophy when it came to fishing. I was taught early on about the old saying "catch your limit, but limit your catch". That was more evident when I would fish the small brook trout streams where I grew up outside of Sudbury, Ontario. The streams were small and the number of trout in them was few and far between, due to the easy access of old logging roads. It was hard to fathom it considering the number of lakes, rivers, and creeks found around my home town. But many of those of the places suffered from the decades of overfishing and degradation of the surrounding environment. As I grew older, I became a catch and release angler. I would try to do the little things such as pick up litter or volunteer with annual clean ups. Anything to help make the environment a better place for everyone whether they fished or not.

I would describe myself as an angler that follows a strict moral code. The code I follow is basically like the ten commandments

Being ethical goes deeper than the rules and regulations. It comes from the heart and soul and who you are as a person. Either you have ir or you don't, that's how I view it. Because, nearly every outing I see some type of unethical behavior. People not picking up their litter or not respecting an angler's space. Then there's the behavior that I find really disturbing. Seeing the bodies of fish thrown away just for the eggs or snagging fish off the redds. I've also seen a parent fishing in a unethical way with a child next to them. In my head, I want to lecture those anglers that it's wrong. But the rational side of me, knows that I'll be either engaged in a war of words or even worse fists. What can I do? That's the dilemma that I have to deal with whenever I see something that I view as morally wrong.

So how does the ethical angler makes his fishing community better? By setting an example to others. Ask if you can fish below another angler. That person might appreciate that gesture. Every angler wants to be treated with respect. Pick up litter in front of other anglers.  Volunteer to help with annual river clean ups. The Cleveland metro parks does a fantastic job as they have their annual clean ups on the Rocky River. The Ohio Central Basin Steelheaders is another local club that has river clean ups. Both also have events to introduce potential anglers to the fishery and they stress education and conservation.

If there's one group that I try to target that is the younger generation. I try to teach them ethical sportsmenship and respecting the environment. They'll be the ones asked to preserve and protect it once I hang up the pole. The environment they'll be inheriting is going through changes as we speak. Invasive species, loss of habitat, and pollution are threatening Lake Erie and the other Great Lakes. Algae blooms are occurring more, weather patterns are more erratic, and some fish populations are declining.

As an angler it does worry me that the younger generation is losing it's connection with the outdoors. When I was a youngster, I didn't have a computer or a smartphone. During the 70s before cable, we had two channels in Ontario, one in English and the other in French. To stay active, I spent a lot of time in the bush or on the water. During that time, I started to appreciate this wonderful resource that I had. As I gotten older and wiser, I learned that any resource shouldn't be taken for granted. Steelhead Alley's unique fishery is dependent on the number of licenses purchased as the streams can't support a sustainable fishery. How the fishery will survive and continue to grow is educating the next generation, teaching them ten commandants I that follow. It's that simple.

Angling ethics is not a problem belonging to another person; it's a problem that belongs to all of us.
Posted by Greg at 10:18 AM No comments: 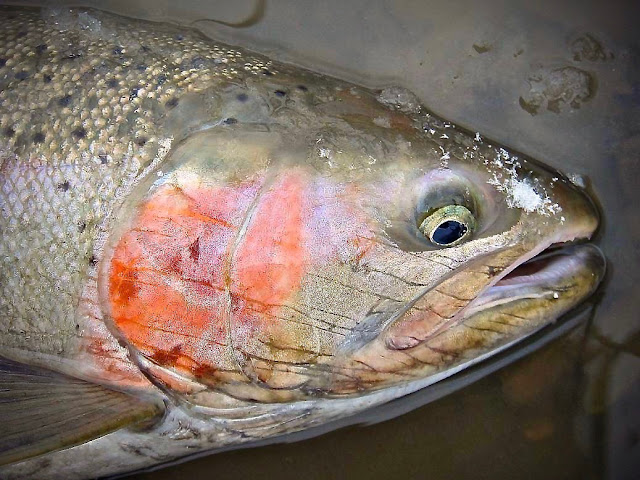 The steelhead is sleek and silver. Much like the contours of an exotic sport car that was painstakingly created. The body is sturdy, the upper back is a gun metal grey and pure silver along the sides. The tail, is oversized and powerful, as exaggeratedly proportioned to its size as are the fish's speed and power.

Out in the vast expanses of Lake Erie, the steelhead searches for food. Gaining the weight necessary for the long duration in streams found along the lake. Some enter the river in early fall and others in the spring. During that time, they under go changes. The females darken and their bellies get bigger as the eggs inside develop. The males also darken, their cheeks turn red, their bellies turn charcoal, and their jaws elongate. During that time they patiently wait in the depth of the pools. They endure the frigrid temperatures of winter. There they wait for the longer days when the waters warm enough for the females to move onto the gravel and spawn.

When I first moved to Ohio in 1998, I didn't even know the state stocked them. Back in my native Canada, I never really fished for them as the closest steelhead streams were the ones that flowed into Lake Superior. That was a little too far for a college student that had a less than reliable car and the lack of funds to make the journey. I watched several anglers on the Chagrin River and they either employed a fly rod or used a spinning reel. I opted for the fly rod because that's what I used for brook trout back home. It took a lot of trail and error and picking the brains of the more seasoned anglers. I still remember the first steelhead I caught, which happened to be a small skipper. There was this great sense of pride that this little fish took my feeble looking zonker. That planted the seed and overtime grew into a life time of passion.

A steelhead fights with a ferocity that other fish can't rival. The walleye is a slug and the smallmouth bass is more a scrapper. With sizzling runs, steelhead will often wreck themselves jumping from the water. But others are more methodical. They'll stubbornly stay on the bottom, refusing to yield. When we bring them in close, they unleash a powerful surge back into the river. It becomes a battle of attrition. Sometimes the battle is won by a simple head shake or a in your face leap and we just stand there either miffed at loss of focus or we tip our cap.

The steelhead can be a puzzling creature. Despite our decades of knowledge, these fish can be maddening. Conditions can be perfect and we didn't even get a bump. We tirelessly work the water. Going from pool to pool, we change colors and patterns and still nothing. The day ends with one or two fish and we head home scratching our heads at what did we do wrong. Then there's the times when aggressively strike at anything you offer. It doesn't matter what you offer them, they'll eagerly take it. The numbers start to pile up and you're in disbelief at the number of them landed. There seems to be no middle ground with them.

It's been nearly 20 years here on the Alley. I was the green steelheader that no experience. During that time, I've logged countless of hours on the rivers. There was a lot of frustration but I was determined. I studied the rivers with great attention. Lost count of the miles I walked through the woods or along the streams. It didn't matter if it was freezing cold, lake effect snows, or blistering heat. I was always somewhere starting from September until May. I've develop a great respect for the steelhead. It's a worthy opponent that has humbled me numerous times. The steelhead is truly a magnificent fish.
Posted by Greg at 8:36 AM No comments: