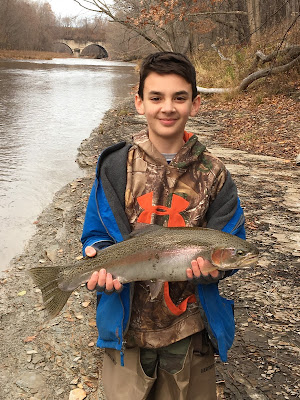 We all exactly remember the place and time when we caught our first fish. Mine was on a dock on a small lake east of Parry Sound at my mother friend's cottage back in the summer of 1977. Her friend's husband put a worm on a hook and helped me cast the bobber out. Within a few minutes, I caught my first fish, a sunfish and that laid the foundation of my passion and love for fishing.

My father wasn't the outdoorsy type. The closest he got the outdoors was the golf course. I was left to own devices on how to fish. I was a voracious reader as I spent hours reading books and magazines. With a cheap rod and reel from Canadian Tire, I would ride my bike down dirt roads fishing the lakes, river, and creeks nearby home. As I got older, that’s when I took a great appreciation of nature and the environment.

Today was my turn to introduce a kid to fishing, my girlfriend's son Cameron. Since I've never had children of my own, I was thrilled at the thought of it. It was the Monday after the Thanksgiving holidays and we were driving out to the Ashtabula River. The "Bula" was the perfect place for introducing a kid to steelhead. The river is smaller and had plenty of easy access. We arrive at one of the metro parks and I knew of a pool that generally holds plenty of fish. As we walked down, we hear gunshots in the distance as it's deer hunting season in Ohio. The river should be a quiet place today.

I set up Cameron's rod and reel and instruct him on the basics of float fishing for steelhead. I keep it as simple as possible - if the float goes under, set the hook. I watch him and his mom fish and I take up a spot farther up as I probe the pool for fish. I catch a fish and Cameron sees his first steelhead. It's an average size Lake Erie steelhead in fall colors. I tell him it's a female by the shape of its head. I take a break from fishing and continually check their sacs and make adjustments. After an hour, that fish I caught is the only one. The hardcore steelheader in me would have them go on a death march in search of fish, but I have to be mindful that I don't know Cameron's threshold. I still try to keep it simple and we head another spot further downstream.

This section is much different than the other spot as the river here runs entirely over shale bedrock. Fish like to hide in the cuts and along the ledges. When the water is stained, this makes fishing even more challenging. Fortunately, I know where the spots are and we start to shuffle our way out. I use the overhanging tree on the opposite side as my guide. Now that we're in the right spot, I help him cast out and guide the float as close as possible to the ledge. The float goes under but the sac hit the bottom. He reels in and I make some adjustments and I cast out to see if we're at the right depth. I tell him about mending the line and then the float goes under and I tell him to set the hook.

The rod bends and throbs as we watch the water boil as the fish comes up. It's a small chunky male, the fight is brief and I grab the line and pull the fish towards the bank. Mom is the on the bank with the camera ready. I pull the hook out and hand the fish to Cameron. He holds it out with a huge smile beaming on his face much like I did back in the summer of 1977. Mom takes a few pictures and Cameron drops the fish back into the river.

I figure there might be more fish in that hole and we bang away. After 20 minutes, we hook into another fish and this one a little larger. I see the flash of silver in the murkiness and tell Cameron to keep the rod high and let the fish tire itself out. This fish has a little more fight than the other one. I steer the fish over in the slack water and it's a female about 25" long and roughly five pounds. I hand Cameron the fish and mom takes another picture of him. We continue to fish and there isn't that much action going on. While it wasn't the day I envisioned as we ended up with 3 fish, I couldn't be happier as Cameron caught his first steelhead. We wrap up the day with a drive back home and stopped at the Willoughby brewery for a nice lunch.

Will this plant the seed of fishing or an appreciation of the environment? It might, but over the past few decades, the number of kids fishing has decreased. You can blame it on a variety of reasons and mine is electronics. Personally, I see too many kids spending a lot of time on their phones and playing video games. This generation is not going to respect or protect the environment if they don't spend time outdoors. If that's the case, nature itself will start to suffer. Fewer people fishing means less revenue for states to help protect and enhance fish habitat. Also, the lack of revenue means less for stocking. I've watched Ohio's steelhead program grow by leaps and bounds. Winter was once a time of waiting for warmer weather. But, with the stocking program, many anglers have the opportunity to fish during those months. I would hate to see this program get affected if the next generation decides that fishing isn't worth their time.

So if you're out fishing and you see a kid struggling, give him or her a helping hand, the future our fishery depends on them.
Posted by Greg at 5:12 PM No comments: