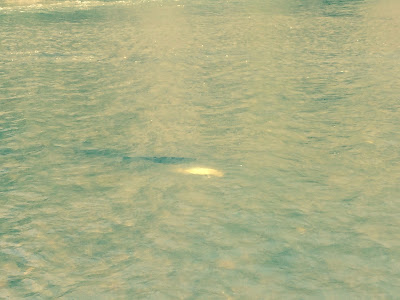 Every spring, we witness the practice or depending on others opinions, the massacre of fishing redds. I've seen the circus on the rivers where people camp out in the wee hours in the morning to secure a spot on the prime spawning beds. We see them every spring, the guys scanning the shallows looking in vain for any fish. The sight of them and in some cases, very large ones, is just too hard to pass up.

There's some who will say they can fish redds without foul hooking fish and I'll call bullshit. The reason why I'm skeptical of is that most of the time, the rivers run low and clear. Fish are visible from a distance. If I can see them, I'm pretty sure they can see me and they most certainly can see your fly or bait. These fish have seen it all. I've watched much to my amusement on top of banks, seeing anglers repeatedly cast over and over. They're determined to get a take and most of the time the fish move away. They're not stupid, they know what's going on. Whenever a fish is hooked, it got flossed. There's no way you're going to change to my mind and I'll think you're the biggest piece of shit also.

I frown upon it because I consider it unethical. I don't buy the excuse that because there's no natural reproduction, it's perfectly fine to fish redds. It's the equivalent of a canned hunt. Fish are packed tightly together and the urge to spawn is so great they're reluctant to move. The end result is they get foul hooked. I've caught dropbacks that are adorned with flies in their tail, stomach, head, and fins. It's really pathetic as I'm pulling out, in some cases about 10 flies out and yes the majority of guys that are raking gravel are fly fishermen. It's sad because I know several fly fishermen that hate it and they unfairly get lumped in with those losers. But, I've also seen bait fishermen or other anglers tossing lures routinely fish redds.

What even angers me more are the idiots that fight a foul hooked fish. They have no control over it and the fish is stressed to the point that might not survive if released. They don't have the common sense to snap the line. I've seen the casualties late in the spring of fish that probably died from repeatedly being caught as they spawn. It's heartbreaking because they died a needless death.

Currently, the states along the Steelhead Alley don't have any desire to stop the practice. They're not going to close the season, because it's a put and take fishery. Neither the park rangers or the game warden will do anything, because it's not illegal. Policing it amongst ourselves? Fat chance of that ever happening. It will go in one ear and out the other. They couldn't care less and wouldn't hesitate to tell you shove your opinion up your ass. As for the guides, I've seen plenty of them on the redds. You would think they would be the voices of reasoning, but you won't hear a peep from them. I guess the money is just to good to pass up. If I see blatant snagging, I'll say something, but it's not worth getting into a scrap over it.

I just have to accept the fact that this part of fishing here on the Alley.
Posted by Greg at 10:37 AM No comments: