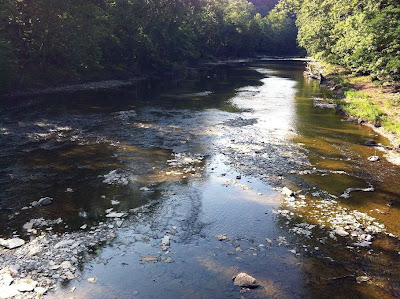 The Alley is experiencing one of the driest summer since 1988. Pretty well the entire Midwest is in a drought ever since the spring. Any rain that has fallen is quickly absorbed by the parched ground. Lawns throughout the area are burnt to a crisp. Many of the farmers are fearful that this year’s corn and soybeans will be lost. The only times it rained were the periodic storms off the lake. They were brief intense downpours, but even they couldn’t quench the thrist of the earth. The rivers went up slightly as the water got muddy and the water quickly receded and the rivers went back to barely flowing. Many of the pools have turned into frog water as flow had halted or is barely noticeable. In many sections, where steelheaders once stood they would looking out at 20 to 30 feet out. A lot of my work takes me out east especially the eastern suburbs of Cleveland. Drives along the Chagrin River road and the river barely flows over the shale bedrock. Several riffles have all but dried up. The banks are rock hard and along the river the cracks in the clay soil remind me of a desert landscape where rain forgot to fall. 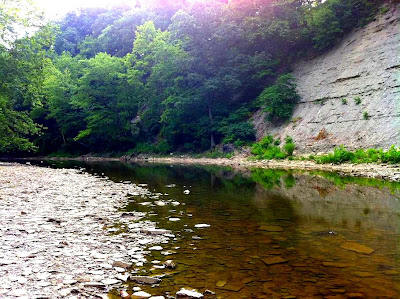 Later this evening, I ran through the Rocky River metro park. The day before it was 98F and with the heat index it felt like 106F and the humidity was suffocating. There was no way I was going to run in that heat and I seek the refuge of the AC, read a book and had a couple of ice cold Avery’s white rascal wheat ale. Today, it was a more reasonable with temps in the upper 80s and nice breeze off the lake. I ran along the river and I couldn’t help notice how low it was. The river had shrunk in half. Rocks that should have been under water were bleached by the sun and heat. In some section the river moved quicker because more the water was funneled through the narrows. Holes that during the season held steelhead were revealed and being the savvy steelheader I'm always looking to gain an upper hand and I took mental notes. What was absent were fish as I didn’t see any life at all. I watched a couple of teenagers with a net dredging the bottom. What they were looking for I wasn’t sure but probably crayfish as they were working the faster water.

I continued to run under the canopy and the shade was a welcomed relief. The cicadas buzzed in the trees and the odd bird sang. In this section of the park there are several massive trees. Giants from a time when this section of Ohio was only populated by native people. There is a red and white oak and a cottonwood that dwarf the other surrounding trees. These trees are probably hundreds of year old and are testament that they withstood the many years of hard winters, hot dry summers and wind storms.

I finally made it up the trial that connects Lorain and Story roads. I huffed and puffed and felt my legs burn as I struggled to make it to the top of the steep hill. I was 3 miles from the Jeep and I was soaked in sweat. How fitting that a ice cream stand was right across the road. I was parched and nothing would feel more refreshing than handmade ice cream. Too bad I didn't carry some loose cash as I felt somewhat disappointed that I couldn’t sink my teeth into chocolate ice cream. I turned and started running down the hill back into the park. On the way, there was a large buck sporting a beautiful rack in velvet. He briefly looked up at me and continued to feed along the trail, wondering why are these humans always on the run. By the time steelhead are running, his reddish coat will be tawny and the velvet gone. He will also be more bulky and imposing after a summer of feeding on the lush vegetation.

I made to the Jeep and my running app on the phone spat out the results. The sexy computerized female voice informed me that I ran 6 miles in little over an hour. Then I got a congratulatory comment from none other Tim Tebow telling me I broke another record. Drenched in sweat, I had both windows down and drove home along the parkway. I could see some people fishing fishing at the fords and any of the deeper pools. With the lower conditions, I’m pretty sure that’s where the fish are.

As for me, I haven’t really wetted a line much over the past few weeks. The heat and sun have left me burnt and tired. Sunday is the day to go fishing and with the dry and hot conditions, I generally have to talk myself into why I should go out. The times I’ve gone out the fishing has at best average. A high bright sky and searing sun generally keeps the bite inconsistent. The fish are scattered and the heat makes walking hole to hole a monumental task. I’ll continue to grind it out all summer working as we’re making our way to the dog days of summer.
Posted by Greg at 1:57 PM No comments: 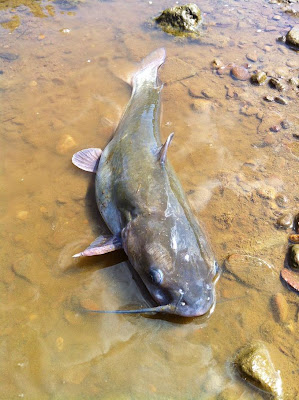 So far its been a hot and dry summer and I predicted that way back after the season was over, as we had record precipation during the winter and spring. The Alley's is bone dry and the streams have been running on empty all summer. Any rain that fell has been quickly absorbed by the parched ground. During my after work runs in the metro park, the Rock  struggles to flow. In the remaining pools, carp, bass and panfish have to make use of any cover available. Most of the fish seem to aimlessly swim around or are content to hide under the trees and logs just out of reach of the bucket crowd.

Usually whenever the streams are that low, I'll head to the Grand for some catfish. The night before I stopped at Hienens - a local grocers that caters to the more affluent crowd and what better place to get my chicken livers from. I tied chunks of livers using spawn sac netting and I made sure they were quarter size. The kitchen table became a bloody mess as my fingers were covered in blood. I stuff a jar full of them and placed them in the fridge. The remaining liver I had leftover was left it out to stew in the heat as that was my chum.

Today was no different when I woke early to see a high blue sky. I was groggy due to the fact I have been sleeping in the living room to stay cool. Sleep is hard to come by as my AC roars like a jet engine, but I'll take the deafening roar over a bedroom that feels like a sauna. It wasn't your typical catfishing day, it was a bright and the temperature at 8:30A.M was already in the 70s and sweltering. When I got the river it was barely flowing. Upstream, large rocks and boulders were scattered everywhere. I crossed over at a spot that during the steelhead season that goes over my crotch. Today, it barely reached my knees. It's been so dry that killdeers have nested and successful raised young on the rocks without any thought that one hard rain would wash their precious eggs or young away. I reached a large pool that is one of most popular spot for steelheaders. There was practically no flow but the water was stained.

If there was a place for catfish this was the place as everywhere else was barely 2 or 3 feet deep. It didn't take long for those livers to work as the float started popping. It kept popping and that usually means - dinks. All anglers know what dinks mean - lousy fishing. I hauled in one dink after another, nearly all of them were a little over the 12" mark. I guess pickings are slim at the bottom of the pool, because they had a voracious appetite or perhaps it was the organic non-caged chicken livers. I kept plugging away until finally the size of fish started to get larger. I guess the scent of the chum was starting to stir some of the bigger fish. Instead of the teasing taps, the float was dragged under with convincing fashion. The larger cats do give a nice fight and there have been times when I thought I hooked into a nice steelhead turned out to be a monster cat. The largest one I caught to date was one that tipped the scale at 20lbs about five years ago at the LaDue reservior. It was a battle of attrition for nearly 20 minutes as I finally won out.

The sun however was slowly burning me as the sweat started to bead and roll down my back. The cooler full of beer in the Jeep was beckoning me. I yanked quite a few cats from that hole but I wanted to head farther upstream. On the way back I waded out to the long run that I frequently fish. I was halfway out and I could see the bottom littered with rocks, the perfect holding place for steelhead. Hard to believe that just two months ago this river had a decent number of steelhead in it.

I got back to the Jeep and I was parched. Nothing hits a parched throat than a ice cold beer. In the cooler were Brooklyn lager, one of my favorite lagers. I chugged it down and felt the dryness go away immediately. It was absolutely refreshing. I hopped in the Jeep drove to another spot up river. This was another favorite steelhead pool and the volume was half what it should be. I could make out the school of carp swimming along the logs as their golden scales gave away their presence. But I had no corn or doughballs for them. The downed trees on the opposite side would give a cat some shelter. It was more shallow so I figured there wasn't a lot of room and larger cats tend to be anti social. But now it was nearly 90F and the humidity was thick. If I caught one fish I would call it a day since I've been in the sun for almost five hours. Sure enough I was able to coax a cat out of the lumber. I managed to pull it in and noticed its caudal fin was a ragged mess. It was practically non existent and in tatters. Despite its lack of caudal fin the fish swam off in snake like fashion.

Satisfied with the day's outing I made the drive home back west. Before leaving I had another beer and was plenty for tonight. I do hope this dry spell doesn't extend into fall as in past years we experienced drought like conditions well into October. Last September and October we received a lot of rain that kept the rivers up and allow some steelhead to make their way in much early. I looking forward to those days again.
Posted by Greg at 10:50 PM 1 comment: