Merry Christmas from the Crapahoga 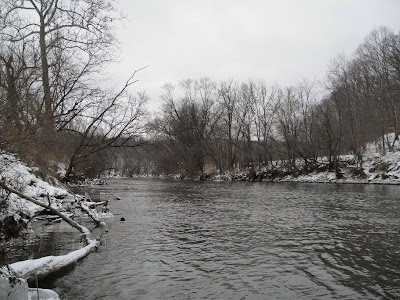 Another year is finally coming to an end and I couldn't be any happier. This without a doubt so far has been the worst season since I've been here on the Alley. To add more salt to the wound, we were hit with an early cold snap that locked the rivers up several weeks before Christmas. That happens when the streams are barely moving. The down time was spent walking the various malls like a zombie looking for gifts. I buy a coffee and sit down, I couldn't get the thought of no fishing for weeks to come. What would I do? I thought of going into statis, but I had to smack myself. I guess I would have to man up and tough it out.

Then a light bulb went off in my head - the Cuyahoga River! The Hoga as the locals call it rarely freezes over and it isn't the result of periodic fires. I been in the national park numerous times and it's a green island surrounded by a urban sea. The river is slightly larger than the Grand and not to many fellow steelheaders I know fish it or they've kept it a secret. Over the years, I often talked about going there, but I never did and I always had an excuse. Since the power plant has been fishing terribly over the past few weeks, I fished it out of desperation. 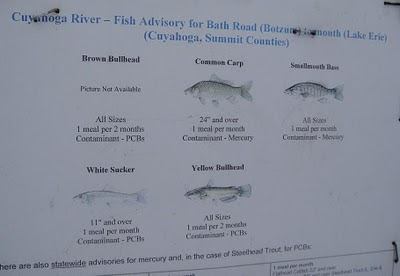 The placed I decided to go was the first dam and when I reached it, the first thing I noticed was the sign posted by the state EPA about the how many fish a person should consume because of contaminates - just what every growing boy needs. The Hoga is a lot cleaner than it was 40 years ago, but there is still a lot of waste in the river due the cities of Akron and Kent. As I walked down, I noticed some of the rocks were littered with footprints and old spawn sac netting. I fished the dam and didn't get any hits. I started to walk downstream and fished and fished and fished.

I made several notes and I was impressed with the river. Some of the spots I fished were chock full of gravel and below that some nice cuts and runs to hold pods of steelies. The only bad note is the river isn't wading friendly, as the banks are high, deep in some spots and the vegetation nasty. This is the result of the river's meandering nature. It's a shame that the state won't stock it as it mainly runs through public land and has a lot of access.

To make a long story short, the fish (if there were any) played the role of Heat Miser, Scrooge and the Grinch. I didn't even sniff a take, but it was nice to fish water that I've never been on.

Here are some the idiots, scumbags and losers that we all run into every time out

The Low Holer- They seek out pools and holes. They silently sneak up and before you know it, you hear a float hit the water. They often try to act clueless thinking that you only need 20' of water to work with. The best way to get back at a low holer, is low hole him. You should see the look on their faces.

The Bum - Found around some the most popular spots often looking for handouts such as hens for eggs, sacs, hooks, smokes or a fish to feed their family of eight. Prefer easy access points so they can quickly toss a fish into the trunk of their beater. They'll often use one of their kids to get fish because nobody can be an asshole to a five year old.

The Know-It-All - Loves to point how much they know about steelheading, but most of the time they catch one or two fish or nothing at all. Beside fishing, they also think they're experts at politics, sports and world events. They'll criticize others and point out the mistakes they're making. On fishing forums, they're the self appointed experts.

The Pool Hog - Loves to pull off drifts that can cover an entire zip code. Most the time they can't see the float and only when an angler screaming at them will get their attention. Some will work in teams to cover more water. They expect others to wait for them to finish their drifts. There have been times instead of cutting their line, I would rather cut their balls off.

The Motor Mouth - If the planet had a energy crisis, their mouth would save the world. You name it, they'll yack about it for hours. Some people believe they do it, so they can get rid of people from certain spots. Topics to force people away include - Dennis Kucinich, any of Cleveland's sports teams, their nagging wife, or their latest bout with hemorrhoids.

The Slob - Easy to spot on the rivers as they leave a trail of garbage - twinkie wrappers, cans of beer, the entrails of a fish, and 50 yds of line. So lazy they'll take a dump on somebody's lawn (no lie, it happened) or piss on somebody's car. So fat and out of shape they can't wander more than 50' from the parking lot.

The Tough Guy - Usually have poor social skills and are socially inept. Most of the time, they are little mouthy runts. They freak out if anybody comes 50' near them and threaten bodily harm. But when push comes to shove, they quickly back pedal and try to make amends. After fishing they go home and cry on the fishing forums about some asshole that tried to take his spot.

The Vulture - Like the scavenger they scan the rivers for action and if they see somebody hammering fish, they swoop in for scraps. Most time, they'll linger waiting for the opportunity to quickly get into the hot spot. But when they see the person coming back for their spot, they quickly take flight or wait until the last second before being chased away.

The Cheapskate - So cheap, they walk into a run full of fish to retrieve a fly or hook, even though they have 4 dozen on them. The same goes for retrieving floats and shiners, as they'll chase it downstream and even risk drowning, because they dropped $2.50 for a float or spend $2.00 for a couple dozen shiners. They prefer to drive with others to save money on gas and deliberately forget to bring their wallets. If they buy lunch, you'll be lucky to get a Slim Jim or something from the McDonald's dollar menu.


The Grouch - A miserable, crotchy anti-social asshole that can't stand people. Their usually easy to spot as they often scowl and mutter curse words when you greet them. They hope that their awful demeanor will discourage you from fishing next them, but in most cases it backfires. They hate giving out information and usually ignore your requests. They often wished that they could pack heat.
Posted by Greg at 11:33 PM 4 comments: