Time for another recon mission just before my vacation week. Earlier in the week, I started my mission when I was working near the South Chagrin reservation. I had a couple of hours to kill and what better time to use it then scope out some new sections. What I found was a couple of decent holes, but a lot of what I dub - shit water. Shit water is a section that has nothing to offer to steelhead and one some of these shit water can go quite distance. But since all of the streams were coming, I wasn't going to waste time fishing there. 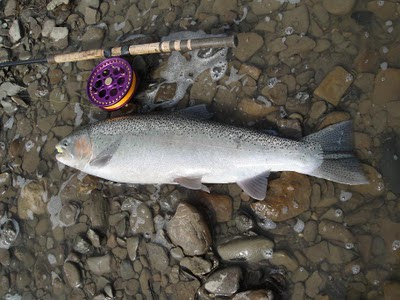 The problem with knowing a lot of streams is where to fish? Last night, I constantly flipped flopped on where to go. I finally decided to start out far east and work my way back home. I woke up very early, wolfing down some eggs and bacon and filling the mug full of java. I dressed in black from head to toe and I felt like some special ops guy. The morning was very chilly and the weather honks were calling for snow showers later in the day. The cold weather has keep a lot of the fish in a holding pattern. That was evident on Sunday where we found fish stacked like cord wood in one pool.

I arrived at first light and started the walk down to my first spot. There were still a lot of ice chunks littering the woods and I noticed the river had a slightly chalky color. I hit the first spot and I quickly got into fish. But after that I got nothing for about an hour. I blame it on the past flooding as the river changed course and what was once a great run was nothing more than a garbage depot of logs and branches. The run was a lot smaller and probably didn't hold that many fish. 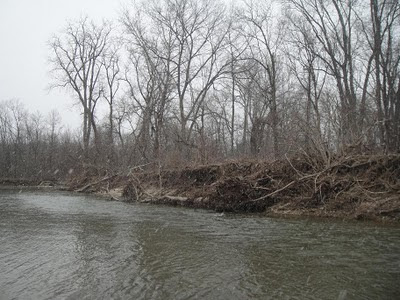 I fished another spot and I was tying on a hook, I heard this loud splash and I could see something large bolt downstream. It startled me and I thought to myself there was a hog hiding out. But sure enough in the hole where I was ready to cast into, I could see a beaver poking his head out of the water. He looked at me and basically gave me the middle finger - a loud tail slap. Lucky for him, his coat is worth nothing these days. The fishing was slow and I had a nagging urge to head west and go back to the place where we slammed them on Sunday. 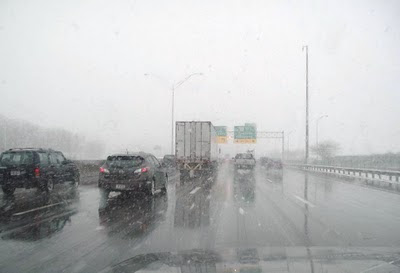 I arrived at the same spot and I was greeted by 10 cars parked along the road. I groaned and hoped it was newbies day out. I walked down and there was only one person fishing the pool. Right off the bat I hit two fish, but after that it was fish here and there. Once the clouds moved in the fish shut off and early signs of boredom started to set in. I was on the fence whether to go home or hit one more spot. Since it was 2:00P.M, I had a lot of time to burn. Unlike the two streams, the next one was running low and clear. I often like fishing low and clear, because fish start to pile into any green water they can find. It was tough conditions, but I manage caught fish in every spot. Both hens I caught were completely spawned out. Then right on cue for the upcoming rush hour, it started to snow and snowed like a mother on the way home. It was actually nice to see some snow as we need some more runoff to bump the rivers up. The mission was success as I have it narrowed down to two streams to fish next week.
Posted by Greg at 6:04 PM 1 comment: 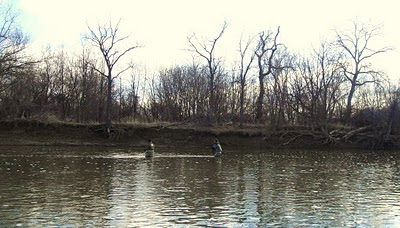 Hit the river out east this morning as I was once again "ahem" late. I got the call that the fishing was slow as nothing was caught. I arrived to see Bubba and Dave fishing upstream above a tailout. Having a members only card is great when being late for the river as I got a front row seat for the event. For late March, it felt like late December as the temperature was stuck below freezing. Lucky for us, the cold temperatures didn't bother the fish as we started hauling them in. All of them were fresh and feisty as it made the cold wind and icing guides that more tolerable. 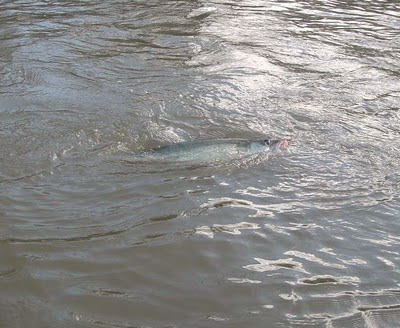 The highlight of the morning was when Bubba thought he had another steelie on the line. As he was reeling it in, he chuckled out loud that it was a walleye. Sure enough, it was a fat walleye that took a pink sac. I've heard that some walleye are taken at the lower section of the river during the spring, but I've never seen one caught. We debated whether to keep it since walleye are leagues above steelhead when it comes to taste. I've liken steelhead to eating an old boot - no flavor and tough. But we decided to let it go and fight for another day or ending up on somebody's plate. 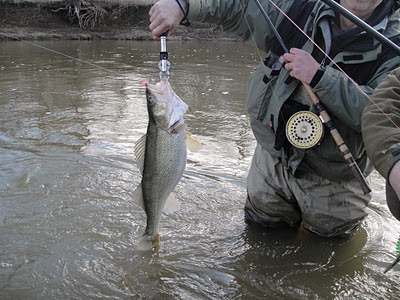 It was nice to see good numbers of fish as it felt eons ago when we surpassed double digit hook ups. I hope this is a prelude to my upcoming vacation. On a side note, VCU beating Kansas?!?!? I threw my bracket in the garbage when I got home......... 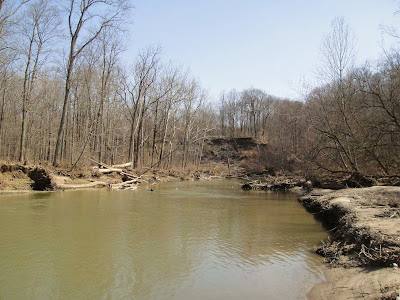 Many along Steelhead Alley were curious to see how their home rivers looked after the massive flooding earlier this month. But before we could race down to the river, Mother Nature decided throw another egg at us and dumped more rain and jacked the temperature up. All of the rivers blew out during the week and the weekend was iffy. Many were chomping at the bit to kick off the spring run. Because of the flooding many of the rivers had heavy sediment loads and the water was extremely murky. I fished several times after work and caught the usual skippers that are found on the lower sections. But it was no where like past years. 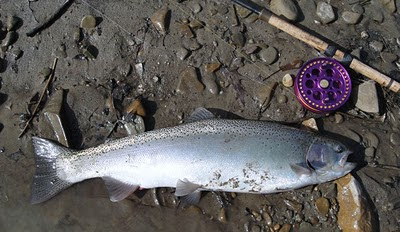 Many were hoping we had a decent run of fish, but March can be a fickled month as the weather can change at a moments notice. Since the fishing has been so bad and the water murky, I didn't see the point of getting up at the crack of dawn. I arrived at the Chagrin at a very tardy 10:30A.M and I didn't see one car the lot. I geared up and walked down the trail. The height of the flooding was evident as the surrounding woods were scoured cleaned, branches and logs piled up and small shrubs flatten. This section of the river is constantly changing because of the clay banks being craved out and gravel moved from section to the other.


Much to my surprise the river really didn't change that much, with the exception of gravel and log jams being moved. With it being late March, fish at the higher sections are usually spawning and at several spots, I only seen a couple of fish spawning as I walked right on them. I hit a couple of my money holes and I was rewarded with several nice fish and all of them were fresh fill of piss and vinegar. But I had to work for them as it wasn't a easy day by any means. I received calls from friends and the reports ranged from nothing, a few here and there, and your a homo for catching fish. Both the Vermilion and Rocky were terrible on Sunday as many posted a shutout. 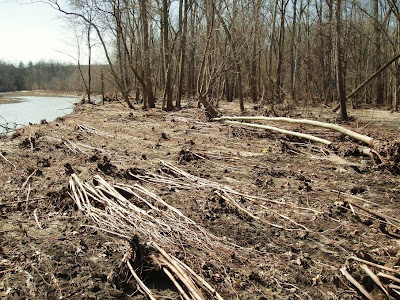 After getting my fix, I drove upstream above the Gate's Mills dam that collapsed several weeks ago. I was curious to see what the water was like, but I figured a lot of fish probably didn't make it up there if at all. There are several metro parks along that that section and I pulled into one. I walked along the trial and the river is slightly smaller with a mixture of riffles and lazy pools. I fished several spots and got no takers. There were quite a few others looking to scout water for the upcoming spring or next season.


It's a couple more weeks before my annual spring vacation and I hoping we get some more fish. I really think that the past flood flushed all of the post spawn fish out the system and very little fish made it in as the both the lake and rivers are the same temperature. Many I talked to felt the same, but some I know have all ready threw in the towel and are waiting for walleye and perch season. 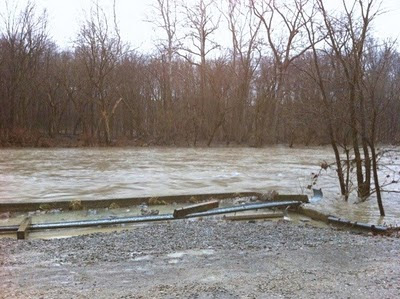 Mother Nature is toying with us, the rivers were coming down but she decided to dump some more rain. The rivers started to creep back up and the park rangers had to haul out the barriers again. It had rained most of the day and I knew it was on the verge of spilling over the banks. The water was right up the wall along the parkway and slowly flooding the lots and woods. 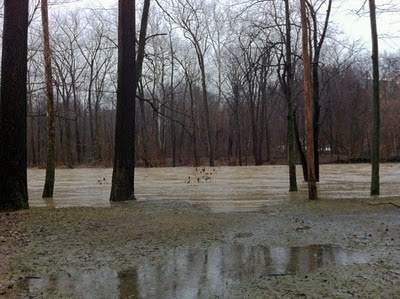 As I drove the park rangers had the barriers in the back of the truck and that meant our drive was coming to an end. The Grand is still above flood stage and more rain is on the way for this Wednesday, arrrrgh