This pattern was developed in Michigan (not sure) and is one of my favorite egg patterns. The clown egg is similiar to the glo bug. The only difference is more colors are used. I like to mix up as many color combinations as possible. Wrap the thread around the hook several times Cut a piece of foam and tie it in. Then move the foam to the side. There should be four different colors used for this recipe. Tie in another piece of foam. Tie in the final piece of foam. All of the foam should be next to each other. Pull the foam up and with a sharp pair of scissors, cut across. You can fluff out the fibers to give it a more rounder shape. Try as many color combination as you like. I find this pattern is great on early season steelhead or when the water is off color.
Posted by Greg at 5:38 PM 1 comment:

Go To Plan B 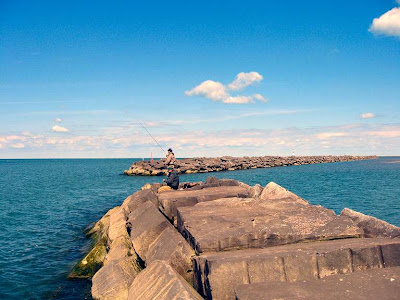 Another steelhead season commenced and I'm heading out east early this morning for the first trip. September is usually a hit or miss when it comes to steelhead. Last year, we had a cooler and wetter August. After Labor Day, some fish were being caught in the lower sections of some eastern streams. Earlier in the week we had some heavy rainfall in the Cleveland area. But, I had no idea how much rain fell farther east. I heard through the grapevine that some fish had moved into the lower sections of several streams. I was suppose to go Saturday, but I slept in after a grueling week of work. Saturday night, I started to get prepared for the morning trip. During this time of the season, I will bring along my spinning reel and small box of spoons. September is usually when steelhead start to prowl along the breakwalls feeding on bait fish and waiting to head upstream.

I woke around 5:30A.M and hit the road. It was a fairly chilly morning with temperatures in the low 40s. I arrived shortly after sunrise and noticed several cars parked along the road. From the bridge above, I could the river was very low and clear. I decided to give myself an hour to see if anything was in the river. Earlier in the week, I had reports on fish moving into the lower section. From the water conditions, it was obvious that the fish dropped back into the lake. I walked upstream and fished a couple of deeper holes. I didn't have a thermometer but the water felt warm. The river was barely flowing and I could see the bottom without the aid of polarized sunglasses. I knew it was time to go to plan B and head to the lake.

When I arrived at the lake, I was surprised to see the water was green. Just a couple of days ago the wind was roaring from the west and that usually meant the water would be muddy. There was hardly a breeze and the sky was overcast. I swapped the pin for the spinning reel and walked out to the short wall. There were several people fishing and I picked out my spot. I was relieved that the wall was short as I forgot my landing net. I sorted through the box of Cleos and K.O Wobblers and picked out my trusty old blue and silver Cleo. Casting with a 14' rod was effortless and I started the long process of covering water. Breakwall fishing can be bust or boom. I've seen guys chucking spoons for hours and have nothing to show for. Then there are the guys that show up around 10:00A.M and withing five minutes have a fish on. 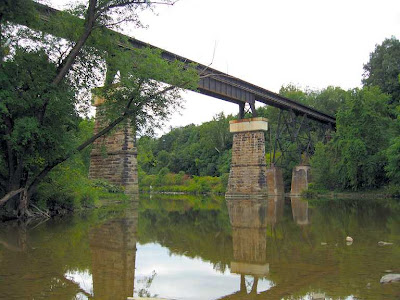 Several anglers earlier in the morning had caught some fish. I arrived around 10:00A.M and an hour later I had no hits. I constantly changed colors and patterns, looking for that winning combo. All morning the sky was low and grey. That's when the fishing is best as steelhead like to ambush their prey. Then the sun started to come out and I was concerned as that usually shuts the fish down. In the distance, I could see a large clouds gradually heading east. I looked at my watch and it was 12:30P.M, I've been fishing for nearly three hours and I had two hits. One guy next to me already landed two fish and another hooked into two nice sized smallies. The clouds finally showed up and the water got darker. There was also some nice chop to cut down on the sunlight penetrating through. Hopefully the steelhead would start prowl about.

Then it finally happened,that telltale dead stop of the lure and then the reel started to scream. A decent sized male leaped from the water and started to run for Canada. It was to fell the trob of the rod and seeing a steelhead leap from the water. Lucky for me, I was able to step down on a rock at the water's edge and release the fish. Satisfied with my catch, I ended the day on a good note and headed home. On the way home, I decided to listen to the Browns game only to hear the Indians game. I figured the Browns game was cut short due to another blow out. I shut the radio off and waited until I got home as I had recorded the game on the DVR. To my surprise the final score was 51 to 45 and Ocho Cinco made good on his promise to jump into the dog pound where he received a nice beer shower.

As the days get shorter and the nights cooler, steelhead start to stage near the mouths of the rivers. They often cruise along the walls looking to feed on baitfish. When fishing breakwalls a long net is a must. Most of the rocks at the water's edge are wet and covered in algae. I've seen several anglers slip and fall into the lake when trying to grab a steelhead. As for lures, my favorite choice are spoons such as Cleos and Wobblers. The best size spoons are 1/3 to 2/5 oz, they are lighter and doesn't feel like your hauling in a brick. The best colors are silver, blue/silver, green/silver and silver /red. The best time to go is before sunrise as steelhead tend to be closer to shore. If the sky is clear the sun will drive them into deeper water. During overcast days, fish can be caught anytime of the day.

When September rolls around I get ready for breakwall fishing. The lake is where most of the action is. Steelhead tend to be very aggressive and will hit spoons with reckless abandon. The lake gives steelhead plenty of room to rip off a lot of line. So whenever the streams are low and clear and fish are few and far between, go to plan B.
Posted by Greg at 4:56 PM No comments: