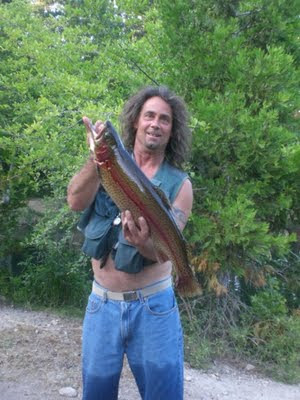 Last year, I thought it was nothing more than an aberration. I figured we were due for an off year and that would be it. The number of fish were low, but I managed great outings due to my knowledge of the rivers. When September rolled around and it was the same thing as past years - no rain and hot. Fish started showing up out east, but the numbers were low as that's expected in Ohio. October was the same - no rain, still hot and fishing was spotty. The lack of rain kept the rivers low in November and fish were mainly found in the lower sections. Then Mother Nature threw us a curve ball and we where hit with a cold snap. I never seen the rivers ice up so early as it was early December. Nearly all them were locked up tighter than a nun's asshole. The power plant was shitty and if you didn't get to the bubble early, more than likely you posted a shut out. The only game left in town was the Cuyahoga and I pretty well spent the months of December, January and February fishing it and the results were average and I didn't have to worry about people bothering me.

The ice finally blew out in March and the numbers were still low. The lower section of the Grand had it moments and one Sunday we crushed them. Many hoped that the fish were still out in the lake waiting for warmer temperatures. Once again Mother Nature used steelheaders as her favorite chew toy and threw in a shitload of rain. The Rock had the second worst flood in recorded history and we nearly had 5" of rain for the month. The constant blowout probably meant that some fish spawned and returned to the lake without even seeing a hook. My annual vacation in April was a disaster I started the week off with blown out rivers. I had to resort to fishing several ditches and the fishing was decent. Once the water levels dropped, it was a bitchfest about the lack of fish. A lot of guides were sweating at the thought of clients wearing a skunk around their necks. The fairweather fishermen were freaking out as they only had a couple of weeks to cram in fishing. There were fish to be found but you had to log a lot of miles. For me the month of April was probably one the worst for me. Several fishing pals of mine, had already tossed the gear in the garage. There were some fish still spawning in early May and they picked the worst place to do it - the east branch of the Rock. It was a floss fest and I even heard the Russians haul out nearly 20 fish. For me I stopped fishing as work started to pile in and in a couple of weeks I'll be chasing carp and perch.

As for the season, I still had great outings but I had to work for them. There was no easy pickings this year. I found a lot of great water on the Hoga and next season when everything freezes over, I'll know where to go. But I would rank this as the worst season in the 12 years I've been here.

There's plenty of theories to go around - walleye and lamprey predation, disruptive weather patterns, the dead zone in the central basin of the lake, ODNR secretly stocking less fish and yes I even heard that the evil Canucks were netting too many fish on their side. It just wasn't Ohio that had a bad season, it was also Pennsylvania and New York.

For weeks, I have been battling the mother of all colds. I can't get rid of this little bastard of a bug. Every night I'm practically hacking a lung out or I need industrial strength Draino to unclog my head. But it won't keep me in bed - not for this diehard steelheader.

Finally for once the sun decided to poke its head out and stay for the day. The rivers were down to fishable levels and many were hoping for a last kick at the can as it was May 1st. With gas at $4.15 per gallon, I wasn't going to make a long haul out east. I decided to stay closer and fish the Chagrin. The lot had about 6 cars and I didn't have to think really hard where they were fishing.

I fished the mid section of the river and the first thing I noticed at the first gravel bed was no redds. In past years, this section would be littered with redds and fishermen. With the high water, there would be signs of redds dug out near the shore, but there were none. All I saw was two lonely males looking to fornicate. Unfortunately, they were late for the party. Farther up I fished a run and caught a couple of measly dropback hens.

As I wrote last week about the spring steelheaders, there is another one that I forgot to mention - Fattie McSnaggingpants. They're the fat slobs usually found around gravel. They're fat like a bear and often have the temper of one. Extremely territorially, they have no patience for some youngster loitering around their fish. This bonehead made it clear to me as he furiously pointed at the 3 fish when I crossed over. I looked at him and made sure he could read my lips "eat shit loser". I should of walked on the fish and pleaded that I didn't know. Sometimes, I'll do it just to be dick. Like an old bear he huffed and puffed and I knew he wasn't capable of chasing me because his XXXL neoprene waders would hinder his ability to run and would probably drop dead from overheating if he did so. He went back to plundering what available fish he could floss.

I walked by several gravel beds and I didn't see any redds or fish. I fished the pools and runs and got nothing. Maybe the fish blew through it and beyond the collapsed dam. I walked back and Fattie was on the bank trying to look for fish - what a douche. He scowled at me as he didn't forget my pleasant exchange.

I drove several miles past the dam and parked at one of the park's lot. This section of the river had some very nice water. It was a mixture of riffles, pools, nice long cuts along the bank and submerged trees. There wasn't a person around and I used the opportunity to scout some more water. Access was very easy as the trail was very close to the river. I could see this section holding a lot of fish during the winter months. But it was the same here as downstream - no redds. I fished one run and managed to catch a couple of drop back males that were hiding in a dark deep hole. I fished several more pools and didn't catch anything. I talked to a couple of anglers and they didn't hit anything. They shared the sentiment as me that were happy to see this terrible season come to an end.

It seems to me that most of the fish ( if there were any ) are long gone.
Posted by Greg at 7:48 PM No comments: