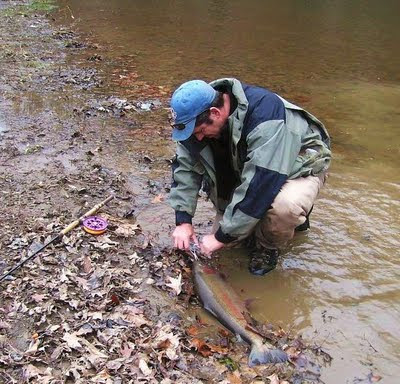 Taking Black Friday off for the obvious reason that every steelheader would rather go out and get skunked than having to shop.
Posted by Greg at 7:37 PM 1 comment: 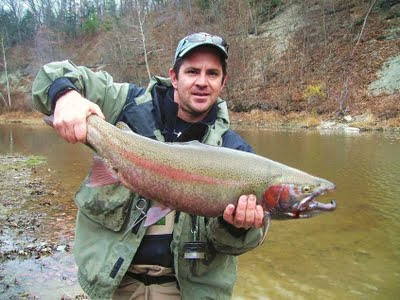 Same shit, different week and nothing has changed here on the Alley. Once again, many were faced with low and ridiculously clear conditions. Many of the streams have fish, but they have been hammered with everything but the kitchen sink. For the record, I hate fishing low and clear. It's pointless and a complete waste of time. Spare me the stealth fishing bullshit with a 5X tippet and a #16 blood dot or single egg. Fish aren't stupid especially in gin clear water where they've seen every Tom, Dick and Harry.

That's where the Grand comes to the rescue. Over the years, the Grand has rarely failed me. But I've never seen the river this low in recent memory. I could see holes that in past years would of been obstructed by the murkiness that the Grand is well known for. I know the Grand like the back of my hand. Finding fish wasn't going to be hard, the only problem was if they would come out and play.

Saturday was a scouting day as I took the upcoming Monday off. I was hoping to float it that day, but a little mishap with tie downs almost caused my pontoon boat to fly off the top of me Jeep on I-480. Thankfully the boat didn't end up in somebody's windshield. However one of the pontoon's got puncture. According to the flow gauge, the Grand was flowing at a pedestrian 80 on the graph so the float trip was scrapped. I didn't want to spend the entire time bottoming out, playing pinball with the numerous rocks sticking out of the water or possibly blowing out another tube.

There was no need to get there early Saturday morning. But old habits are hard to change and I still woke up early. Instead of the standard eggs and bacon, I actually treated myself to some blueberry pancakes. It was a hearty meal and those pancakes stuck to my ribs. I took my time, drinking coffee and listening to Rush's Permanent Waves. The word on the rivers was that there were hardly any people out. Most probably threw in the towel and parked their asses on the couch until the next blowout. I arrived at the bridge and there were two cars. As I was dressing, I could see two anglers fishing not far from the bridge. That was a good sign as holes are few and far between and I hoped they would spend the majority of the time there.

I strolled pass the anglers and greeted them. I continued to walk along the trail and noticed the river was running very slow and low. On a good note, that meant most of the fish would be hiding in deeper holes and runs. The sun had yet to rise over the cliffs and trees. I was the first person to fish this section. It was riffle that spilled into a long run that cut along the shale cliffs. It wasn't deep, probably a couple of feet, but the broken water and plenty of rocks gave fish cover galore. It turned out to be decent morning as the majority of fish had been in the river for some time. Once the sun was high in the sky, the fish shut down and retreated to deeper and darker locales. I was more than satisfied with the results and called it a day as I wanted to watch the Ohio State game. 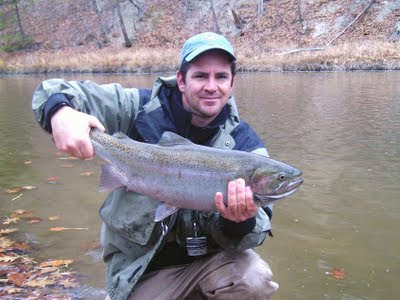 Monday morning was one those days that steelheaders love - grey and slightly cold. I started at the same spot and fished farther up at a couple of pools that in past years hold a lot of fish. By mid November most of the fish were pretty well spread out. This section of the Grand didn't have a lot of pools instead it was mostly flats that didn't have a lot of cover or structures. However upstream there was the mother of all gravel beds that in the spring are peppered with redds. The pool below can hold an obscene number of fish when conditions are right. 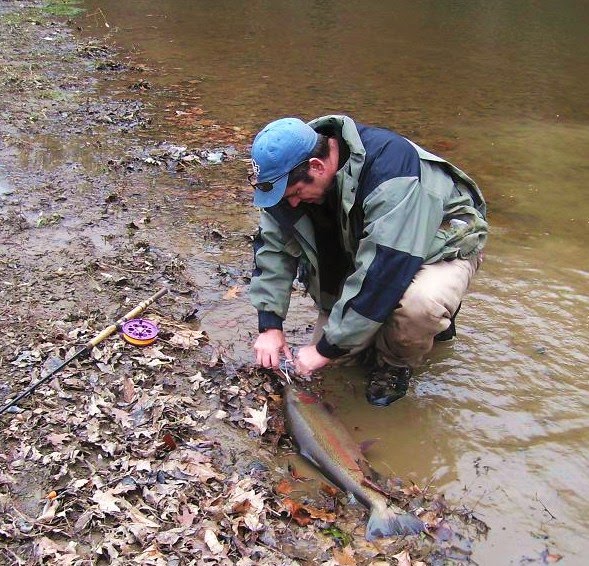 The ground was covered in frost as I walked the trail. The woods were silent and the only sound was my heavy breathing. It was first light when I got to the first spot. The riffle above was barely flowing. There wasn't a lot of deep water here and this was the largest pool. I knew the fish would be hold tight against the shale ledges. I was correct and started getting in some decent size fish. The highlight of the morning was the tank I hooked. Drifting right down the pipe, the float shot under and I felt a huge tug. I set the hook and watched the tail fin come out of the water. It was a fairly large fish and I had a tough fight on my hands as the fish constantly ran out into the current. Once I beached him, I thought it was larger than the fish caught last week. It's hard to say as both were very thick, but it was truly a hog.

So far this season the Grand has coughed up a lot of huge fish. After banging a couple of spots, I decided to move up river as I haven't fished it yet and was curious to see how low some of the pools were. It was the same as downstream - nobody was fishing and it was nice to fish in peace and quiet. That can be a rare thing on Steelhead Alley as November is one of the busiest months.
Posted by Greg at 3:53 PM 1 comment: 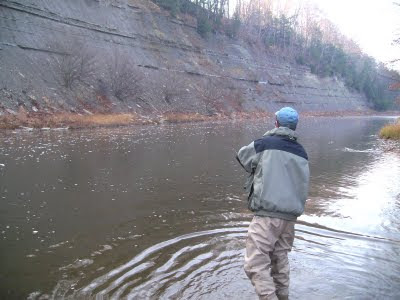 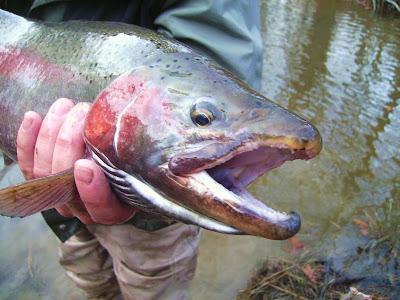 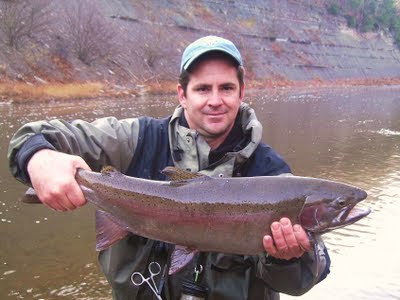 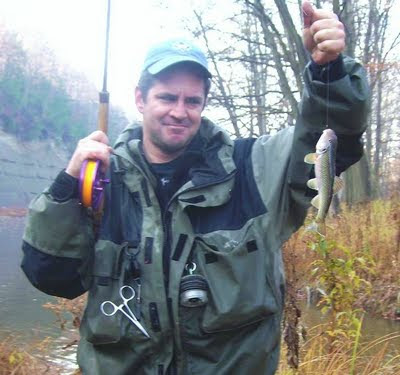 In all of my years fishing Steelhead Alley, I've never had a day where I hooked into so many large fish. Most of the time, it's those "cookie cutter" steelhead - 25" and 4lbs and sometimes a 10 pounder gets thrown in. I thanked the fishing gods for taking care of her and giving the both us great day.
Posted by Greg at 1:35 PM 1 comment: