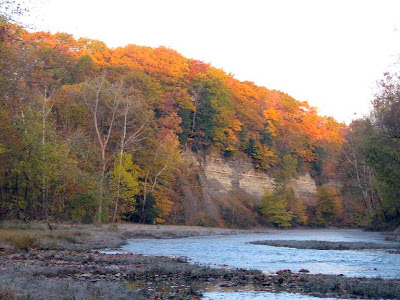 The fall steelhead run in is official underway. One river that has been on fire is the Grand. During the past week there has been reports of some anglers hitting the motherload of fish.

Now time to vent. This week, I took Thursday off to go to court to fight a bullshit traffic ticket that I got from the North Olmsted police. Speeding is one thing, but to get a rolling stop infraction in my subdivision at 2:30 in the afternoon and there wasn't a car at the intersection??? I pull into the driveway and was ready to get out, only to see this cruiser come roaring up my driveway. The way the cop acted he thought I robbed a bank. I wasn't too happy that the cop raced up my driveway and I gave him an earful. The cop tells me there have been complaints about people not stopping. I called bullshit and starting arguing with him. I made a right turn and I stopped. A complete stop is so subjective and hiding in somebody driveway doesn't give him a full view. I could tell he was going to be a hard ass and wasn't going to give me a break. I figured I'll see how far I can take before he threatens me. We went back and forth and he started to get pissed. His buddy riding shotgun just glared me. Too bad, that's what happens when you dick people over, don't expect them to be pleasant. He issued the ticket and I told him I'll have my day court and get off my property.

I went to court and told the judge not guilty and my case was set. A month later, I was back in court. I researched the internet and I didn't have good chance of winning because the officer had his buddy riding shotgun. I knew both of them would tell the judge that I didn't stop after all cops tell the truth all the time right? I didn’t want 2 points on my record, since I had to drive as a service tech, so I asked for a deal. I guess the cop must of had short term memory, because he didn't remember me. I thought he would look at me and say "your the guy in the red Jeep that was running your mouth" . He dropped the charge and issued me the ever popular burned out tail light. It was a $30.00 fine and I could live with that. It was a done deal as we didn't even step in the court room. I walked downstairs to settle up and then the shit hit the fan as I was presented with a $146.00 bill. The clerk told me the $116.00 was for court costs. I started bitching that my local income and property taxes paid for the judges, clerks and cops. She on the other hand, heard this a million times and was unmoved. What a fucking racket, you beat the charge but you'll still get it in the ass. I paid it and stormed out of the building. I was still steaming and what a better time then to head for the Grand. 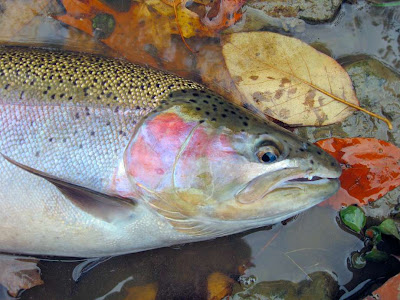 Now for the fishing. Early in the week, a little birdie told me that the Grand had a monster run of fish. Most the other streams were starting to run low and clear. But the Grand was still holding its color. I arrived at the lower section of the river around 10:30A.M and I could see about 10 cars in the lot. As I pulled in, I didn’t see anybody fishing the one section above the bridge. I got dressed and walked down. I was puzzled to see nobody up or down stream, I had no idea where most of the people went. As long as they were far away, the better. The river had a nice flow and color, the visibility was about 2’ and slightly stained. I had a couple containers of King salmon eggs and put them to use. Within a few minutes, I had my first fish. That was a prelude for things to come as I started to hook in fish. I was stunned at the number of takes. I had barely moved 80 yards and I had 8 fish on the beach. The word was that a lot of steelhead moved up the Grand. They were either fed up of being crammed in tiny pools or the sheer number of anglers scared them back into the lake. What was PA's loss was Ohio's gain and I welcomed the fish into our larger streams. I continued below the bridge and there were 3 guys fishing. I fished below them and I started hooking up. Those uncured eggs were the ticket as the other guys had skein and they were trying in vain to fight off the hordes of creek chubs robbing them blind. When it was all said and done, I had a banner day. Most of the fish were on the average size. I was surprised that the fish hit all afternoon as this spot is right in and usually gets hammered daily throughout the season. I wondered if the fish made it further upstream as I had plans to assault the upper stretches this weekend.


I woke early Saturday and the blast of cold air hit me as I walked out the door. It had to be below 32F as there was a heavy frost on the grass and the Jeep's windows. I drove off and headed for the mid section of the Grand. When I arrived it was 6:45A.M and it was pitch black. I started the long walk upstream to the mouth of a feeder creek. It was hard to navigate through the grass and sedge as it covered most of the trail. It was eerie as all of the vegetation was covered in frost and the woods were quiet. I finally arrived at the feeder creek and it was twilight. The water was low and I noticed the float was starting to drag. I only had about 2’ of line and I knew the fish wouldn’t be holding in water that shallow. I started to gun and run back downstream. Without sunglasses, I could make out rocks in the water. The water had a tea color and the flow was moderate to slow. The one pool that I do well in the winter was too low and I skipped it. I was able to find some deeper water. It was tough to pin as the flow was really weak, I was able to fish from the bank and I had the first fish of the morning, a jack. I fished for several more minutes and the creek chubs drove me out of there. 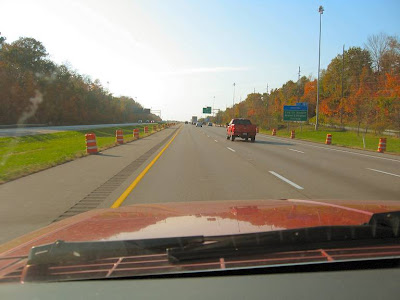 It was cold enough for ice to form on the guides as I struggled to get off long drifts. I hit another pool and worked one small hole. It paid off as a large hen crushed a pink sac. But, it was a case of one fish here and there. I knew there had to be one place where the fish were holed up. I finally found the spot around the bend and it’s a section that a lot of anglers walk by. The fly guys don’t fish it because of the trees and newbies can’t read the water here. I started to drift along the inside of the bend and a small hen took it. At first I didn’t set the hook hard as I thought it was creek chub. Then it was off to the races as I started to hook into fish. I managed to beach a couple of fish and lost a couple more. The river here is about 3’ to 4’ deep and is great during the winter months. I continued to walk downstream and I found another of my money pools vacant. This pool was a classic steelhead alley pool. It was about 3” deep and cut along the bank and tailed out to a riffle. I couldn’t see bottom and I knew this spot was packed with fish. I started at the head of the pool and started banging fish. It was about 11:00A.M and I landed my ninth fish of the morning. All of the fish were starting to get dark and I assumed they were from Pennsylvania. I was somewhat surprised to see nobody on the water this morning and I decided to head farther downstream as the fish in that pool shut off.

I drove to the other side of the river and started the half a mile walk to one of my favorite spots. I finally arrived I was happy to see nobody there. This riffle spilled into a long run that was about 4’ deep. This run can hold a lot of fish when the river is low as there isn’t that much deep water here. It took some time to get the fish biting and then the dinner bell rang and the float started popping. It was a mixed bag of jacks, males and hens that fell for the pink sacs. When I use uncured eggs, I usually tie about 100 sacs, because I’ll go through a lot of them. After 5 drifts, I’ll replace the sac as they become white and lose their scent. I was down to 3 sacs and I had landed 17 fish. I looked at the time it was 3:00P.M, I told myself one more fish and I’ll head home. It had been about 20 minutes since my last fish. I moved farther down as I cleaned out the upper part of the run. My wishes were answered as a small jack leaped from the water. I released the fish and started the walk back. I was beat, my shoulder was tired and my back was aching. I finally made to the lot and called my buddy. He was stuck at home painting and wanted to go out tomorrow. I told him it was another banner day and I’ve never seen so many fish in the Grand. He told me he would fish for a couple of hours early in the morning and head home to paint. I laughed and said “If you were here today, you would of used every excuse in the book to weasel your ass out of painting". I took my time driving back and I when I got home I started the long process of tying another 100 sacs for tomorrow's trip.

Currently, all of the rivers are getting very low and clear. With the exception of the Grand, there are fish, but there are spread out. The colder temperatures don't seem to effect the fish as they are being caught in the faster water. The weather outlook for next week is a blast of cold air with rain or snow in the forecast. We could use another dose of high water to push more fish into the rivers.
Posted by Greg at 8:23 PM