Welcome to the Rock 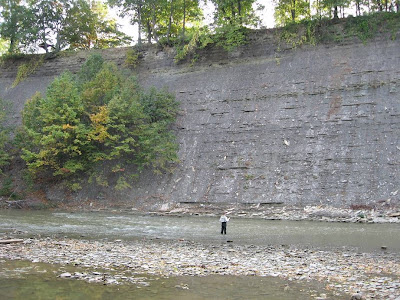 We finally received enough rainfall to get the rivers up and flowing. Like with any heavy rainfall, it was going to take some time for the waters to clear. After work, I stopped by the Rocky to see the water conditions. The river was running very stained but not flowing too hard. This is due to the heavy build up of summer silt. The busy season at work winding down, I would be able to slip out of work a little early.

Today, I got lucky and finished work early. I got to the river around 3:00P.M and there were about 5 people fishing. One of my favorite spots was vacated. The river was lower than yesterday, but it was still running stained. The night before I tied some jumbo skein bags. Skein can be a mess and I prefer to tie them in sacs, rather than hauling around a big bag and cutting chunks. The fishing at first was slow and the constant gusting wind kept blowing the line off the reel. I was fishing the lower section not far from the lake. During the fall, steelhead often stage in lower section before heading upstream. The river is wider but it's not very deep. There was a decent current and I started drifting along the seam. Since the first riffle isn't very far from the lake, winds can affect the flow. Whenever the wind is blowing from the north, the water surges upstream. It common to hear the water gurgling and then all of the sudden it stops. Some time the water level will go up several inches. During one year, the wind out of the south was so strong the lower section dropped by half. It was odd seeing the river take on a whole different character. The flow was very fast and the fish were stacked into several deep pools. But, as soon as the wind stopped the water starting moving upstream.

I moved around and tried different colored sacs, but I didn't have any takers. I decided to move downstream about 50 yards below the first riffle. I was going through a lot of sacs because of the snags. Leaves in the water were also starting to become a problem. Then I finally got into a fish that took a pink sac. It leaped from the water and raced upstream. It felt like a fairly large fish and when I got to shore, it was a large hen that had to be at least 30". I took a quick picture and released her. I resumed fishing in the same spot and it was slow. Nobody else was hooking into anything. Then I noticed a steelhead floating belly up go by me. I grabbed it by the tail and didn't see any visible wounds. Some guy came by and told me some angler caught it upstream at the pool. When he landed the fish and he simply kicked it back into the water. I tried to revive the fish, but it was beyond help. The angler probably over fought it and with the warm water temperature, the shock was too much for it. I all ready had enough skein and salmon eggs at home. I asked several anglers downstream if they were interested in taking the fish. As soon as I said it was a hen, one guy jumped at the offer. It is very important during this time of the year, that fish are not to be over played. Let them run or jump once and then get them in quick. 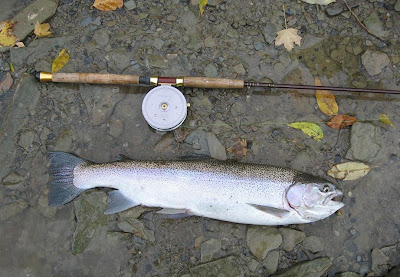 Even though I live 10 minutes from the Rocky, it's my least favorite river. The river is often referred to as the "urban jewel" Several people I know often call it the "urban sewer" Because of the Lakewood and North Olmsted water treatment plants. The main reason why I don't like it are the crowds. During the fall and spring the entire river can be a zoo. In the winter months, most of the fairweather anglers are on the couch, so the crowds tend to be more tolerable.


One thing the Rock has over the other rivers is access. The main river is flows thorough the Cleveland Metro parks. There is 13 miles of river to fish on and plenty places to park. Because of it's suburban location, peace and quiet is hard to find. One of my favorite places is the lower section near the marina. The mouth of the river is about a half a mile. During the spring when most of the anglers are harassing spawning fish, I'll be down at the marina. In the spring, large schools of emerald shiners move up river. Not to far behind are skippers or dropback steelhead heading back to the lake.

So far the water levels on most of the rivers are still running high, but they're fishable. Get out while you can because the water will start to drop fast.
Posted by Greg at 8:41 PM