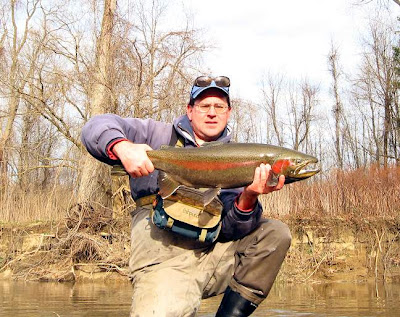 The first push of Manistees have started to move up the rivers after the last blowout. Depending on what river you fished and how far up you went, it was bling or scrap metal. On the Rocky, it was bling-bling as every fish caught was in mint condition and full of fight. It felt nice seeing a fish jump and fight hard in water about 38F. But, the constant howling wind ran me off the river after a couple of hours in the morning. Two cups of java finally thawed me out.

I hit the Chagrin and it was a mix of bling and spawned out Pennsylvania fish. The thermometer barely got over 32F and I was tardy this morning as I arrived at 8:30A.M. It was a slow morning as I bounced from pool to pool. Once the sun got up the fish awoke from their slumber. Fishing tailouts, runs and slicks sandwiched between gravel beds was the ticket. Takes ranged from teasing taps to violent takedowns. I used the last of my uncured King eggs and once again I wasn't disappointed as I had my best day ever on the Chagrin. But, I got lucky yesterday and managed to score some uncured Coho eggs. I even got me some gold as a carp mistaken my white spawn sac for a boilie. The water so cold that the fat bastard didn't even put up fight. I hauled on the beach and he literally sunk in the muck.

The bonus of the day was the huge male that I landed on a frayed 6 lbs test fluorocarbon tippet. I'm terrible for not checking my line for nicks and frays. I previously caught 7 fish and drifted the last 20 yards of a pool before spilling into a gravel riffle. The takedown was hard and once I set the hook, I knew I had a bull on. I gingerly applied pressure and let him fight the current. He parked himself on the bottom and it was a battle of tug of war. I was afraid that the tippet would crap out and I wouldn't get a glimpse of the fish. I finally got him close enough and was the largest fish of the new season for me. I hauled his huge ass on the beach and the hefty ole man probably tipped the scales at 12lbs.

Taking tomorrow off for some much needed sleep and I'm glad as I'm getting tired of tying eggs every night. Sadly, my vacation week is coming to an end and it's back to the grind. Now that it December, we're starting off the winter steelheading season and this is where we separate the boys from men.
Posted by Greg at 8:20 PM

Can any of you click on the pictures and see if the image appears in another window. I'm having problems seeing it on my computer. Thanks

Nice Winter Buck Greg. Glad some water came into shape for your holidays. We sure are hoping this storm system brings our beloved home trib to decent levels for next week.
I clicked on your pic and it came up fine.

How's it going Greg? I'm due to hit the Rocky soon with my buddy Kurt. I've been fishing Elk Creek exclusively alot this fall. I miss your posts on FishErie. Nice blog BTW. There are lots of requests for steelheading101. Bring it back if you can.