Pray to the Fishing Gods 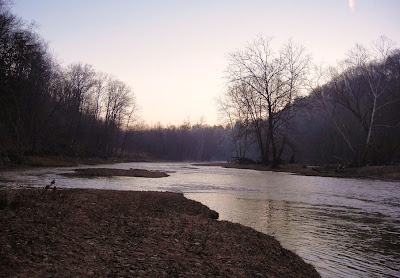 Vacation week and there's the threat of rain - imagine that. Over the years, it's been either blown out streams or streams barely flowing. Once in a while, I'll have a week of prime conditions. But tonight I  might have to sacrifice a goldfish to appease the fishing gods. Let's hope I don't have to resort to that.

Hoping that the weather for the rest of the week is wrong, I'm scouting the mid section of the Grand. The Grand will be a bustling place today as the spring run is at its peak. I've already had a plan of action in case the rain ruins the week, but I want to get on the Grand first thing Monday morning,
Usually when I'm scouting water, I'll speed fish. Speed fishing is fishing a hole or pool for about 15 minutes, if I don't get a bite in that time, I'm off to the next spot. Some people might think it's silly to not to work the spot, but I insist that speed fishing is highly effective as I can cover a lot of water and at the end of the day, I have a pretty good idea where the fish will be holding the next day.

I'm speed fishing furiously as I bounced around several spots and I picked up one measly spawned out hen. Something isn't quite right as there should be a lot of fish. I hit another section of the river farther downstream and I had to walk along one of the feeder creeks. This creek is often massacred during the spring as lowlifes and dirtbags plunder it for easy pickings. When it's low, you can practically piss across it in some spots. It's loaded with snags and any smart fish would hid under them or better yet disguise themselves as suckers. Unfortunately many of them are screwed as they have no where to really hide. As I walked down I could some of the lowlifes working the micro holes for fish - dolts. When I reached the mouth of the creek, I noticed the hole in front of the creek was gone. The river was flowing much faster and that meant during the flood, it bulldozed it flat - no more tailout. I fished the flat farther down and it too was flowing different. In past years, there were cuts and seams that fish would hold in, but now it was a straight flow - damn. My heart sinks as this was one of my favorite spots. But that's life on the Alley as rivers change constantly and that's where scouting will pay off.

I pick off some fish but I'm puzzled at the lack of them. I scratch this section of my list and I make some phone calls, only to hear I'm not the only struggle on the streams. On the way home, I check the weather forecast and the chance of rain has dropped.

From what I gathered, it was a tough day for a lot of people as the fish are very scattered. Must pray to the fish gods tonight.