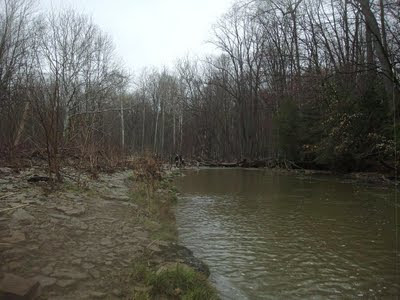 April showers bring May flowers, unfortunately they also keep the streams high and muddy. So far this month its been rain, rain, rain and more rain. I thought we lived in Ohio, not Mawsynram, India   ( for you jeopardy geeks it's the wettest place on earth ) not to mention, it has been a very cool month. For many, we hoped that the cooler weather will keep the fish around longer. This time last year, many of the fish were long gone back to the big pond as we had a hot, dry month. So far this year, the fish have decided to bypass Ohio all together so nobody had an idea what to expect.

Considering it was Easter Sunday, that meant most of the anglers were stuck at home with their favorite mother-in-law or snacking on the labors of Junior's egg hunt. Not wanting to waste time with spring cleaning, I hit the road as I was curious to see if any fish moved in. With the rivers blown, it was back to the same ditch I fished several week ago. I arrived to see some cars with out of state plates. It seems for some reason this ditch attracts out of staters. I walked down and the creek was running dirty - nice. There was one guy below and he fit the description of a spring time steelheader - neoprene waders, trucker cap, fly rod, smoke hanging out his mouth, enormous vest and can't read water.

I fished below him as I watched this idiot doing the typical technique that spring steelheaders are known for - flip and rip. The spot he was fishing was about the size of my dining table. There must of been a pod of fish, because he was flipping over and over and over and once in a while I could hear him curse that he missed one. I seriously despise assholes like him, because they are the worst form of anglers, at least snaggers don't hide the fact that their snagging fish.

I quickly hooked into several drop backs hanging along the banks under the trees. All of them had the signs of being in there for some time - scars, ragged fins and dirty looking. The bozo above was still trying to get them to "ahem" bite. I was releasing a fish and then it happened, I bent over to pop the hook out and my camera fell out into the drink. I quickly grabbed it and cursed "not again" I have a terrible track record for dunking cameras and phones into the water. I popped the battery cover open and I didn't see any trace of water - whew. I thought maybe I got it out fast enough that water didn't have a chance to get in. I took no chances and kept in my jacket pocket to dry for several hours.

I walked downstream and the creek was lower than the last time I fished. I could see a couple fish here and there, but I had bigger water in mind. Then I could see about 8 guys fishing a riffle and it was an orgy of flossing. I know a lot of fly fishermen and most are ethical when it comes to spawning fish. I guess these were the out of staters and they wanted fish bad to justify the loads of money they spent on gas. All of them were in their twenties as they whooped and hollared as their hooks popped out the the fishes ass and backs.

Since I was bait fishing, I wasn't terribly concerned on finding a spot and I pretty well had the entire pool above to myself. I worked the head and the float shot under and it was a large fish as it caught the attention of the crew downstream. I fought pretty hard and it was a large fresh male. I was able to get to the rocks and it was a fine Manistee - broad shoulders and sporting a mean kype. I managed a couple more fish and they were spawned out hens. There wasn't much else to fish downstream as it was littered with trees and branches.

I walked back to the falls and was treated to a great sight. A steelhead leaped from the water and tried to make its way up the falls. I could see it was a fresh fish as it furiously splashed through the water. It got about 10' up and finally realized that better waters ahead weren't in the picture and quickly slid back into the depths. I fished the run below and picked up some fish before I decided to call it a day. When I got back to popped the battery into the camera and turned it on - It worked!! Thank god because I wasn't looking forward to buying another one.

As for the number of fish coming in? Who knows, if their smart, fornicate quickly and race back to the lake before the fair weather fishermen have a crack at them because we all know they get about 2 weeks in and call it a season.
Posted by Greg at 5:39 PM