Mother Nature is a douchebag 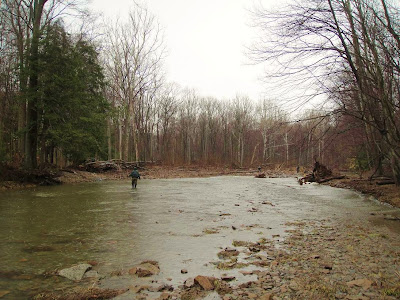 I would have say that Mother Nature has been one nasty bitch - the mother-in-law from hell. No rain last fall, freezing cold winter and now rain storm after rain storm. But I had some back up plans in the work just in case she (no pun intended) rained on my parade during my vacation week. All of the major rivers were still high and muddy and that meant ditch fishing. I'll fish ditches if there is no other option and today wasn't be spent at home doing chores.

I left home and guess what? It was raining and it rained all the way to my destination. It wasn't heavy rain, just that annoying light rain. I arrived at one feeder creek this morning and it had been some time since I've fished it upstream. When I walk downstream to fish the Grand, it's ridiculously low and clear. This particular creek is always changing to due flooding and ice. As expected with feeder creeks, holes are few and far between. The creek was running stained and that meant I had a fighting chance at catching something. I started off at one hole and tossed the float under a tree as the current hugged along the bank. The float popped and I set the hook. In this section, the fish had plenty of room to fight and turned out to be a little fucked up skipper - cuts on his body and one of his eyes was FUBARed. The next two were a couple of drop back males and that was it, as that hole probably couldn't hold anymore fish.

As expected when all of the streams are blown out, fishing alone is out of the question as I could see anglers up and down stream. All of them were fly fishermen and they were trying in vain to see fish in the murky water. Others were fishing near some nasty log jams and some were cursing that their lines got snagged in the trees. There was a crew of guys from Michigan fishing it because they had no where else to go. It sucked that they had to drive all the way from there and I was surprised that they didn't fish any of their home rivers. I broke them the bad news that this was one the worst seasons I've seen ever since I moved here. I tossed a couple of bones their way and wished them the best of luck. 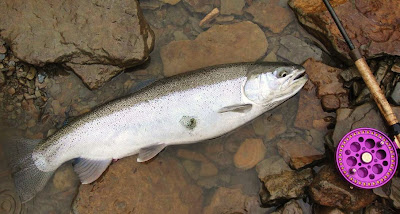 I fished another run and thought to myself that there had some fish in there. I started to work the bubble line and the float went under, it had the telltale signs of hillbilly bonefish at the end of the line - pulling in a water logged shoe. Suckers are often found mingling with steelhead during the spring and they can be an annoyance. I continued to fish and float started to bottom out. I yanked and it felt the rod throb. This wasn't a sucker and I watch a huge hen come to the surface. Other than the lamprey scar on her side, she was beautiful and plump, right out of the big pond and loaded with eggs. She was definitely over 10 and put up a great fight.

This crick saved the day as I more than satisfied with the results. Unfortunately, there is more rain on the way for Friday and the weekend warriors will be bumming at the thought of a wasted opportunity. There isn't a lot of time left in the season and I'm figuring that some fish will spawn and sneak back to the lake without ever seeing a hook.

Pretty fishie. The colour of that reel sure pops!

Bummer about the rains, and I agree, ol' Ma Nature can be a douche sometimes. But shhhhh ... she has big ears!!

The purple steelie eater as my friends call it.

Mother Nature must of heard me bitching last fall and she's spanked me more than I like. The word out is after this last rain fall not a lot of fish made it in.....

That lamprey scar is knarly. Cool how it healed over and sports some spots. Nature...go figure.

As for those MI peeps. LOL! they didn't do their homework. Plenty of fish stacked in the PM, Muskegon and especially the White last weekend.

BTW...
Norland is a Douchebag as well!!!

You guys all have lamprey scars on your nuts!