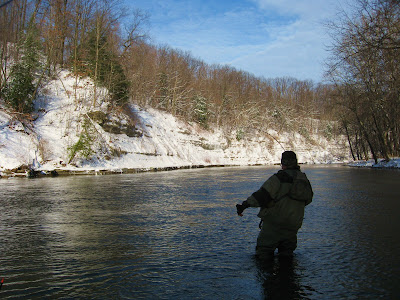 While everybody else was getting wasted and celebrating the new year, I was in bed copping z's for the first outing of 2009. I learned from past experience that excessive amounts of booze, cold weather and freezing water makes for a short day. Even though all of the rivers along Steelhead Alley were at fishable levels, nighttime temps were to be in the teens. It was another gamble that all of the streams would be slushy and possibly unfishable for the day. However, I'm a hardcore steelheader that doesn't have a problem rolling the dice.

The night before I had a game plan with the Wright McGill prostaff. They wanted to fish one river and I had my sights on another that I was really chomping on for some action. I was still in the process of trying to wean them off the urban sewer. The plan was if the sewer sucked, they would head my way. On the way out I got the call that the sewer was indeed slushy. When I arrived at first light, I could see no slush..........nada. The lot was empty and I walked a great spot that holds a ton of fish during the winter. The river was off-color, but the flow was perfect. It didn't take long to hook into the first fish of the new year, a bruising hog that hit at the tailout. It bolted downstream and it was a battle of tug-of-war. For 15 minutes I couldn't budge the prick off the bottom and with a heavy current and a frayed 6lbs tippet, it was see ya. 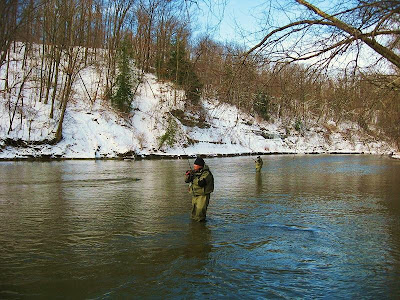 With the colder weather, I knew a lot of steelheaders would be in bed nursing hangovers or just hitting the pillow or toilet. I don't blame them as I remember getting calls when I was in my 20s from friends that were out fishing the day after New Year's. It usually went like this after they took a break and called from a payphone down at the park.

"Dude, where are you? Were hammering the shit out them"

Silence and "But were hammering fish and could you bring us some coffee later?"

Me - "You guys are killing me, I'll be down later" hangs up the phone. 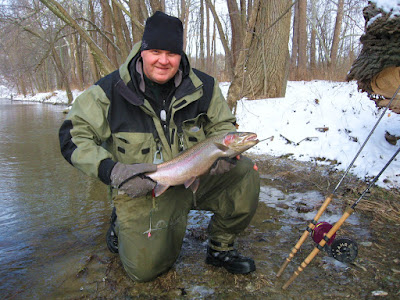 I called the crew and told them it was slush free and I found some players. Even though it was cold the scenery was nice as a fresh coat of snow covered the shale cliffs. The river dropped almost a foot as I could see the where the water level was previously. Eventually the crew pulled in and I showed them the lay out of the river. It was a huge section and there was plenty of room for all three of us to get off those "hero" drifts. The fish were mainly holding at the tail end and hitting sacs in pink and chartreuse.


All three of us had identical jackets and waders and unlike a squeaky clean prostaff, we were a motley crew as our jackets and waders were covered with egg goo and rods and reels splattered with fish slime. But if it was a steelhead pro tourney we would be cleaning house. Even though the temperature was in the 20s and at times the wind made it feel colder, the fish were very active. No light takes or taps, just hard take downs. We had several fish go airborne and some charged downstream.

We made the most of great day as all of us have a grind out one more day at work before the weekend. I couldn't weasel my way out work for tomorrow and the dolts in dispatch scheduled a job for me at 1:00P.M and I still have to come in at 8:30A.M. - brilliant and it going to be one of those mornings were I guzzle coffee and find ways to annoy Jill and Chuck up front.

Good for you Greg. Looks like a beauty crisp morning. Wow that would have fixed me right up. I am currently stuck in steelheading purgatory. Hoping for redemption this coming Wednesday in MI on the Muskegan. I don't know if I'll make it that long...

Oh god you are killing me here...
Nice job and that is a lovely looking fish.
Happy New Year...indeed