January is the month that brings doom and gloom to the majority of steelheaders as streams begin to lock up with ice. Every year my heart sinks when I'm driving by the rivers and I see a thick sheet of ice covering miles of water. If I drank, I would be come a full-blown alcoholic probably spending the weekend yelling at the walls or kicking small dogs. That's why I wanted to hit the water hard before the window started to close shut.

For Saturday, I was the official tour guide as I had four others accompanying me. After the New Year’s day slamfest, both Bubba and Dick swore off the urban sewer and left it for greenhorns and hillbillies. Tagging along were Bubba’s friends from Dayton and all of them never fished this section of the river before and were excited to wet their rods on virgin water. You couldn’t ask for better conditions in January as both the flow and color were in perfect condition. Even though there was a lot of anchor ice on the bottom as we crossed over, the amount of slush was low. Whenever there is anchor ice, the water temperature is just barely hovering just above 32F and can make fish very hard to catch. This when I start beating holes looking for active fish. 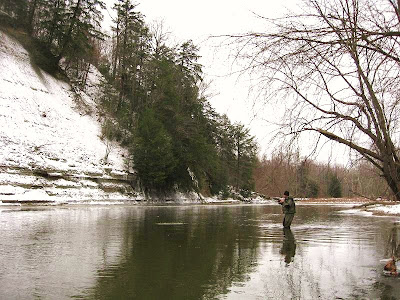 I put a couple of guys on one section and I took the others farther downstream. By doing this we took up some great spots as I knew the hoards of diehards would be making their way downstream. Sure enough as the morning progress, I could hear the branches and twigs snapping as others looked in dismay as their favorite spots were occupied. It was pinner’s day out as every person walking by had a pin. Many years ago it would been guys with fly rods, spinning reels and the odd pinner. This section of the river is classic pinning water - wide, slow and shallow. The morning was chilly and the lines and rod tips constantly iced up giving us fits. Even though the water was cold, the fishing was decent as we caught enough fish to make those cold feet feel warmer. We didn't hear anything up stream and figure both of them were either beating the hole for one fish or hammering them and keeping the glory to themselves. After banging our section, I suggested we head upstream and see how they were doing. We all piled into the spot and managed to catch a couple more before calling it a day.

On Sunday it was another day of hole beating and I wanted to head farther downstream to check out some more water. Today I was with one person and we hit the first spot where everybody was banging fish the day before. It was the same as yesterday - ice on the rods, anchor ice and a slow bite in the morning. We caught a couple here and there to keep the morning interesting. This was the latest I’ve fished this section of the river and usually I’m fishing it hard in the months of November and December. But whenever the river got down to fishable levels it blew out before the weekend. We started to walk downstream and nearly spot was occupied. Away from the cliffs the wind was a tad too strong and there was more slush. I felt it was too difficult to fish and I used the time to pointed out some good spots and suggested that when conditions were more favorable we would fish it. On the way back we noticed a spot was vacated and we decided to fish it. Most people think that spots fished early in the morning are usually pounded and often pass it up for something downstream. Since we were heading back I figured what the hell and started another round of beating the hole again. Sure enough we started hooking into fish and they had a hankering for fresh steelhead eggs. We ended the day early as there were more people near the access.

Monday was the day for the diehards as me, the Dfishinfool (Don) and one of his guides Trout (Travis) were going to hit the river hard. I took a floating holiday and knew the river would be vacant today. I arrived at a tardy 7:30A.M and it was a chilly morning and fishing would be tough as the temperature was going to stay in the upper 20s. That meant another day of flicking off ice from the guides and line. The plan was to hole hop on the way down to the 2 mile marker. We had every type of rod available today - spey, switch, regular fly and noodle. But from the get go the pin kicked ass. It was mostly fresh hens that fell for steelhead eggs tied in pink and chartreuse. Even though the hens looked fresh, Travis caught one and when he was ready for the money shot, she started to spit eggs out. Considering this is still winter, there have been reports of some people catching spawned out hens. We continued downstream and every spot gave up fish. Surprisingly it was the Dfishinfool himself - Don that was carrying a skunk around his neck and that is very unusual for him. But he took in stride and didn't seem to mind that others were enjoying the day.

It was an exhausting 4 out of 5 days of fishing and I'm happy that I was able to get out and fish with others that many would consider crazy for standing in freezing water all day to catch fish. Looking ahead the rivers will remain open as we recieved some rain Tuesday as it got the water levels slightly but enough to blow them out.
Posted by Greg at 5:33 PM

Greg,
That's a sweet double striper! Good on ya brother!