"We're having a heat wave, A tropical heat wave" 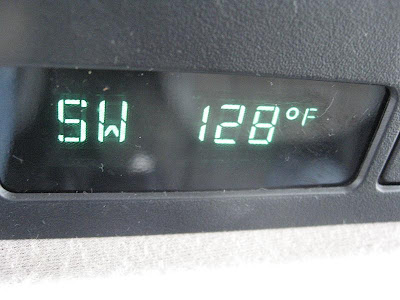 Whenever we get blast of Arctic cold and I'm heading out, I think of the song Heatwave sung by Ella Fitzgerald from one of my favorite movies about two miserable widowers that love to fish - Grumpy Old Men. I often see myself as the belligerent, crusty old fart - Max Goldman played by Walter Matthau when I'm in my "golden years". While I'm not crusty yet, I can be surly to anybody that dares to low hole me. Just like Max in the movie, I'm humming the tune and dusting the snow off my Jeep, getting ready to head to the lake.


Many here in the Cleveland area are hoping for a heat wave as the past few days have been the coldest in recent memory. When I lived in Northern Alberta, the locals thought -5F was a balmy day. Friday morning in Rocky River the mercury hit -11F, Friday morning and most of the city couldn't cope with it - no school, cars wouldn't start, and furnaces conked out. I remember as a kid when my mother prepped me and sister into our winter suits as if we were going to explore the dark side of the moon. It was -10F and she sent us off and watched us waddled our way to school. We never thought about staying home, we just did it as if it was something done naturally. Canadians love to point out that fact to others and here in Cleveland whenever the temperatures get into the single digits or snows, school is often canceled. If that was the case back home, I would still be in the 8th grade. 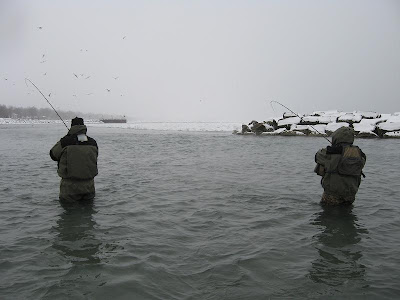 Saturday morning it was a more reasonable 14F and the Jeep groaned and managed to start. When I got in, the overhead readout of the outside temperature was Venus-like 128F, however the wind direction was right. I left the pin at home and took the spinning reel, as I have a difficult time casting it with gloves on. Plus the wind was going to be a royal pain in the ass. I was no hurry to get to the lake as I was meeting the Wright & McGill pro staff. The three of us are as hardcore as you can get when it comes to winter steelheading. Our other steelheading brothers were probably under the blankets sleeping the morning away, dreaming of spring.

Because of the cold, I didn't even bother to get shiners and used gulp minnows, as wet cold fingers become useless fingers when tying knots. The plant was in full overdrive as both stacks were belching. We walked along the lake and the steam was rising off the water. Thankfully there wasn't any wind to speak off and that meant we would fish off the point. Whenever it's colder, the better. The plant had been releasing warm water for the past several days. We entered the water and felt like wading into a stream in late April. It was a welcome relief from standing in bone chilling water before the streams all froze up. The open water was an oasis for a lot of waterfowl as the majority of the lake was frozen over.   Both Bubba and Dick are avid duck hunters and they pointed all the species of water fowl present - buffleheads, bluebills, tundra swans, redheads, scoters, mergansers, mallards, canvasbacks, goldeneyes, gulls and geese. The air is full of their cries and calls.

We set up the floats and I was running 0ver 8' and using 3" emerald shiner gulp minnows. The plant's discharge is a magnet for both shad and shiners. The majority of fish in the plant are gizzard shad and they come in by the hundreds. I prefer to go inside the plant and fish off the discharge. The amount of water coming from the plant is staggering. Over the decades, the current has gouged a long deep trench that runs along the steel wall then hit the  rock breakwall before spilling out into the lake. Inside the plant, I bottom bounce with a minnow or spawn sac. When it's on, the number of fish caught can be mind boggling. Takes are often ferocious and many of these fish often go airborne. The majority of fish find around the plant are juvenile fish with some adults scattered. Feisty and fat as football, these fish can kept the angler busy and forgetting about the chilly conditions.

Since both Bubba and Dick are using centerpins and the wind isn't bad, I elect to fish with them. We set the floats for 8' and I stack about 4 split shots above the minnow. We cast together and watch the floats head out into the lake. There was so much steam coming off the water at times it made picking up the floats difficult. Nothing happened for the first 30 minutes and the switch was turned on. I followed both Bubba's and Dick's float and they reeled in. I let me float go a little further and then I stopped it. I briefly let the minnow flutter and then I felt a hit. I set the hook and watch a steelhead leap from the water. I moved behind the others and adjusted their floats. For an hour the fishing was fast and furious. A couple of times, we had double headers. Due to the warmer water, the fish were more aggressive and willing to strike. If the action out here was great, I couldn't imagine what it would be like inside. The action would go from hot to cold and then the wind started to pick up from the west. Blowing over the pack ice, it was frigid. My face started to get numb and red. Both Bubba and Dick decided to they wanted to go home. Since there wasn't anybody else fishing, I was frothing at the mouth to get into the plant. I stayed and walked back inside.

I waded along the shore and large flocks of gulls rose from the water. The diving ducks took the wing quickly and paddled their feet furiously on the water's surface. I reached the discharge and took the float off. I added more weight and fired out into the current. The mergansers weren't bad so I wasn't worried about them stealing the minnow or getting caught. I felt the sinkers hit bottom and started to bounce along the sand bottom. I kept my finger on the line to detect any slight hits. Most of the time when using minnows, the take is very hard. The line twitched and then I felt the hit. I set the hook and the fish charges. The current here is very strong and the fish rips off line. About 50 yards out, I see the fish rocket out of the water. Because the water here is so clear, I see the fish race about the bottom. It's a juvenile steelhead and he's as fat as a football. They gorge themselves on the massive number of shiners. These fish stay inside the plant all winter until the water gets too warm. I've often wondered if these fish ever see a river. For the next three hours I have my hands full as fish are taking the minnows with reckless abandon. The minnows themselves don't fare very well. A lot of them pop off the hook or fell victim to a couple of mergansers nipping the tails off. I lose my last gulp minnow and that's enough for me to go home. I've probably caught well over 40 fish and it's one of my best days here.

I head back to the lot and once I get around the fence, I'm greeted with a blast of wind. The wind now is about 20 miles an hour and the wind chill is probably below freezing. Only the foolhardy would even attempt to fish here. By the time I get to the Jeep, my waders are completely frozen. I sit in the Jeep and crank the heat wait to take them off. I have a hankering for some of Joe's Deli chicken matzo ball soup. The waders thaw and I remove them. I call Joe's for take out and head home. I call Bubba and tell him about the back of the plant. We make plans to hit the lake early tomorrow. I get lunch and the soup hits the spot. I feel it instantly warm my insides up. I lie on the couch and cover myself in a blanket. Slowly I drift off to sleep, thinking of the tropical heatwave to hurry spring along.
Posted by Greg at 3:27 PM

Congratulations on your artic success.My friend works on Grand Island on the upper Niagara and last week part of the river froze straight across. My fishing fun was relegated to sitting on the couch watching my pin spin as I drank blue and watched Hockey Night in Canada.Oh yeah and I found a Mike Palmateer fan club on Facebook. God save me.

I don't believe a word of this nonsense and I think both those guys were snagged..lol
This weather is making me miserable.
ugh

"I don't believe a word of this nonsense and I think both those guys were snagged..lol"

They snagged a couple of buffleheads and it was a nice meal served with wine.

Buffle heads are one tough quarry...the presentation has to be just right..
When the cons are optimum one can murder them on pinkies!!!
The snowbanks are so high on either side of my drive way that I can't tell if there is a car parked there when I am coming down the street...
And I am about to go out and do some more shovelling...
Kill me now....

There's a shitload of ducks there in the winter - bluebills, bufflehead, goldeneyes and mallards. I haven't seen those little grebes that love to steal shiners off your hook. Once in a while somebody will hook into them and nothing is better steelie and squab.

The buffleheads tasted like a plate of zebra mussels......