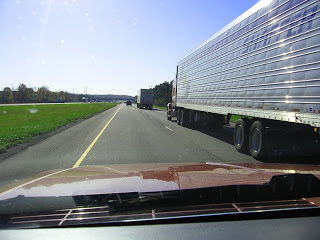 Today ushered in November and many of the diehard steelheaders welcomed Daylight Savings with an extra hour of sleep. Another bonus was the lower gas prices as I filled up the Jeep the night before with gas at $1.86 per gallon. That's a far cry from a couple months ago when gas was almost $4.00 per gallon. With the lower fuel costs, I was more willing to rack up the miles in search of steel. I took the Saturday off as I fished pretty hard the day before and my knees needed a break. It was refreshing to sleep in. I spent the afternoon at Gander Mountain buying some clothes for the upcoming winter. They had great deals on socks, sweaters and long underwear. After that I spent the rest of the day stinking up the kitchen as I tied a ton of sacs for Sunday.

The weather was to be warmer and that meant my old nemesis would be out - fairweather fishermen and hillbillies. I left in the pitch dark and I wasn't that groggy considering it was really 5:30A.M. This is the time of the year to be cautious during the early hours as the rut is on here in Northeastern Ohio. All over the local highways there is a fair share of carcasses littering the median and blood splats on the road. Wired with a week's worth of caffeine, I made it to the river around 6:00A.M and I could see about 6 cars parked. I pretty well knew where all of the folks were fishing and I walked upstream to one of my favorite spots.

It was still dark and with a click, I started fishing. I have to admit that those float lights are killer and a couple of friends asked me to get them some. It was a chilly morning as I noticed ice forming on the guides. I fished tailouts and it was a chore to get a bite. The water had a perfect color, some of the leaves were washed away and most of the fish probably had very little pressure. For two hours, I banged one section from top to bottom and had two fish for my efforts. By know it was 8:00A.M and I packed up and walked around the bend, in the distance I could see a lot of people fishing upstream. I knew how this morning was going to shape up - elbows and assholes. I walked downstream and I could see a ton of people, as I walked on the bridge I looked down and noticed one spot wasn't being fished. I've learned over the years that you never leave any stone unturned and I apply this to fishing. Most people would decline fishing it since it's so close to the bridge, thinking it was probably pounded earlier. I casted out and on the first drift the float tapped and it was a chrome hen that hit a peach sac. I quickly caught a couple more fish and several people downstream looked surprised considering I whacked them so quickly. But this was a small hole and probably a small number of fish. I looked the time and it was 10:00A.M and I had a hankering to move another river. I called a buddy up fishing farther upstream and he told me it was a zoo. I knew where he was fishing and I didn't want to take a number and wait in line. 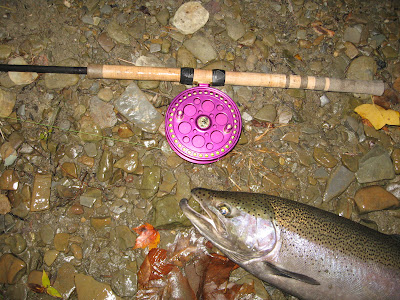 I hopped in the Jeep and drove west. I had one section I wanted to fish and this early in the season can be a crap shot. Either there will be fish or none at all. I pulled into the parking lot and got out. I looked downstream and didn't see a soul. My curiosity got the better of me and I figured what the hell. I walked along the river and you couldn't ask for better conditions, the water was slightly stained and the flow was perfect. I fished a favorite spot and managed a couple of fish in two hours of fishing. I figured most of the fish were still downstream and still making their way upstream. I walked back and drove to the lower section, thinking that most of the people were at home watching the Browns. I headed to one of the metro parks and walked downstream. In the distance, I could see four anglers and there was plenty of room to get off some Olympic distance drifts. This was a nice flat with some depth that flowed into a bend and a pile of lumber. The flow was fast, so I pulled all of the shots down to the bottom about 14" from the hook. I set the float at 4' and cranked out a long cast. I feathered the pin to slow down the float, but I had no takers for a while. It was early afternoon and I wonder if there were a lot of sore jaws on the bottom. Undaunted, I start to shuffle my way down and it I hit the first fish - a large male. I managed some fish and looked at the time 3:30P.M and sun was starting to get low. I was satisfied with the day and gave some poor soul the rest of uncured eggs as he was posting a goose egg. I gave him some pointers and wished him luck. On the way home I listened the Browns cough up a 14 point lead and eventually lose to the Ratbirds.

Sounding like a broken record, the streams will be low and clear in a couple of days. We'll be getting a small dose of Indian summer this week as the temps are to be in the upper 60s and low 70s. I think the fish will push their way upstream regardless of the flow. Counting down the days for vacation week.
Posted by Greg at 6:33 PM