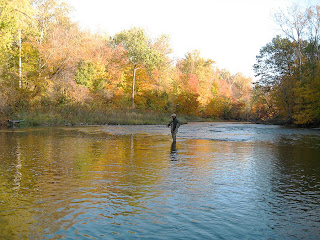 Took a well deserved day off from all of the bullshit at work and what better way to spend it fishing on the last day of October. Earlier in the week we had some cold weather and my procrastinating caught up to me as I waited until the last minute to get my gas hooked up at my apartment. Wednesday night the temps dipped into the low 30s and I froze my ass off. Out east in the snowbelt there were reports of snow and sleet. With the front going over the lake, it was either lake effect rain or snow. I heard through the grapevine that some of the eastern tribs got high as of result of precipitation. How much rain or runoff was anybody's guess. That was perfect for Friday as the weather was be sunny and in the 60s.

With it being Halloween, it would been a hoot dressing up as a giant pink spawn sac or piece of skein or maybe as Donnie Beaver with a giant streamer stuck in the eye. Joking aside, I was going to meet up with a good friend that I haven't fished with for a while. Earlier in the week, I made plans and kept an eye and ear out for info. I heard some rivers were too high and others too low and others had very little fish in them. But there's always a place to fish on Steelhead Alley. 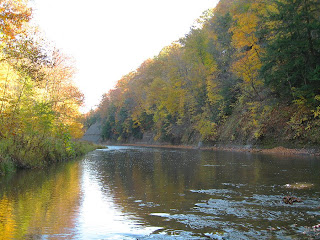 I arrived at the river just before first light and noticed it was in perfect condition. The water was stained from the rotting leaves and the color was perfect for concealing steelhead. The night before I tied a bunch of assorted flavor sacs - peach, pink, red and chartruese and any leftovers would be used as treats for the neigbourhood brats. I was to meet up with the Dfishinfool - Don Mathews. Don was scouting the river for the upcoming weekend of guiding. But before he showed up, I killed some time by spanking fish out of a hole in one section. Eventually he arrived and I was armed with the pin and he had his fly rod and battle ensued. Due the tannic conditions and lower water levels, most if not all of the fish were in deeper runs and pools. We had some double headers and every spot gave up some fat spunky fish. We ended up equal in the pin vs fly battle, but I'm sure I'll kick ass as soon as the snow flies. Most of the fish were holding in the tail end or slack parts of the pools. We continued downstream and I ran into another old friend and we chatted for a bit. 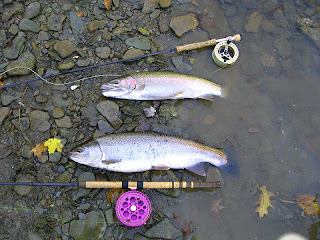 By now the sun was coming up and I was going to head over to the Conneaut with Don as he was going to Erie to get some supplies. I called a source to find out that the Connie was still high and off color. I had second thoughts and Don told me he would stop by to take a look on his to Erie. I started back upstream and tried the same spots we fished earlier. I recieved a call and was told the Connie was out of the question today and tomorrow. It was 11:30A.M and the sun was high in the sky and the temperature was rising. The bite shut off and I was starting to get really hot, so I walked back to the lot and took off the two sweaters I was wearing. I hopped in the Jeep and drove into town to fish a couple of spots. As expected there were a lot people that called in with the 24 hour flu. I was able fish one spot and caught some more before calling it a day around 3:00P.M. I wasn't thrilled at the thought of driving into Cleveland around 4:00P.M as 2 lanes were closed on the I-90 bridge crossing the Cuyahoga River. Sure enough the traffic piled up about a mile from Deadman's curve and I was lucky enough that I knew my way around "da hood" and avoiding gridlock.

We're still waiting for that elusive blowout to happen. For the time being, every time the water levels go up some more fish push up. However, the majority of trees have yet to shed their leaves. Most of those leaves have ended up on the bottom of the streams and the water has that tannic color. Tannin is a weak acid that can affect steelhead's behaviour and movement. But with a good presentation, fish can be had. As it's with every year here on Steelhead Alley, we eventually get a rainfall that flushes out the leaves and silt. Hopefully, that doesn't happen the 3rd week of November - the week of my vacation.
Posted by Greg at 6:15 PM