Deja Vu All Over Again 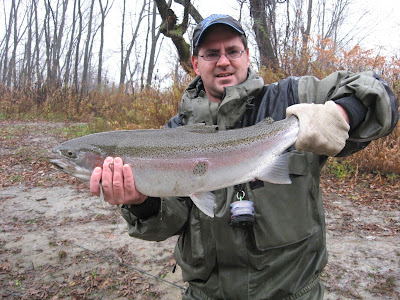 As expected the beginning of my vacation starts off with what else - rain. Yes we needed a lot of it to flush out the leaves, summer silt and trigger a big push of fish. But could it wait at least another week! This is the chance I took when booking off time in November, as the weather is so unpredictable. Last night the weather honks were calling for rain all day Saturday and on Sunday the bottom drops out as temps are to be in the 30s all of next week -lovely. Last November, I started my vacation week with rivers in Ohio blown out and I had to jump across the border to get my fishing fix. As it turned out I had the best day fishing wise in the 10 years of living in Steelhead Alley. But this year, I might be in for a tough time as a bunch of Alberta clippers (what's a clipper named that enters Alberta?). But this Canuck can deal with some harsh conditions. 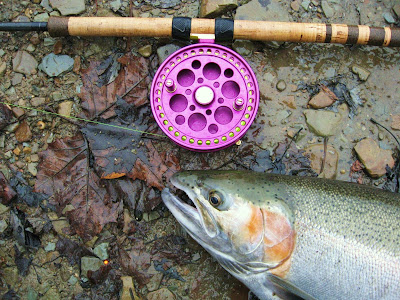 Last night I checked the radar and noticed the rain wouldn't start until early Saturday morning. That was plenty of time to get in some fishing before the water got too high. That evening I tied up a ton of sacs and went to bed later then usual as I knew I wouldn't have to beat anybody to the river. When I left it was still relatively warm and lightly rained the entire way out. I arrived at 6:30A.M, there were no cars to be seen. I looked at the river it was in perfect condition, I figured I had at least 7 hours of fishing before the river started to blow out. I stuck to the lower end and fished the faster water as the river was still warm. It was a mixed bag of skippers and plump adults. Some of the fish were on the large size and with the warmer water temperature, a couple of them ripped off some nice runs. As the morning progressed the water levels came up, but the visibility held. Nearly all of the fish were hold in shallow water right in the middle of the bubble line or at the head of the riffles and runs.

The rain on the other hand didn't let up as a couple of anglers around me that didn't have waterproof jackets bailed after a couple of hours. I was lucky enough to get a spot under the bridge and enjoyed the period of fishing without having to wipe water off my glasses. The fishing was off and on as several would be caught and then the bite would shut off. I was going to fish as long as possible as I knew the river wouldn't be fishable for at least 3 to 4 days. I moved downstream not far from the lake and I meet up with a friend. We knew some fish were staging at the lower end waiting to come up. As the water levels started to rise we noticed waves of fish moving up as we would bang fish quickly and then it died off. Once I used up all of my sacs I called it a day as I looked like a soaked rat and it was a good call. On the way back home I hit the cold front and the wind really picked up. The lake turned nasty as the winds shifted from the south to the northwest.

Now we're offically into winter steelheading. The fair weather fishermen will be parked on the couch for the duration of the year and the true diehards will be on the prowl. Fishing in the Buckeye State will be out of the question for most of the week as nearly an inch of rain fell. We'll she if ole Red is up to the challenge driving through the heart of the snowbelt.
Posted by Greg at 4:00 PM

Finally a flush for you guys. I know it's been a long time coming so I hope it was enough to clean out those OH rivers. Nice cheeks on that fish in the second pic. Also interesting how the lampery scar healed over with colouring and spotting similar to the back markings of that big hen in the first pic.
Our Huron tribs got destroyed by that system and it's iffy if we'll be fishing this week! OMG I can't bear that thought! It'll be a road trip in the works if they don't look like they'll come into shape.
You are right when you say the fair weather chaps will be done. Good riddance I say. Time for the real enjoyable days on the water.

God hates me, but I understand why he did it ;)It's killing me that I'm sitting at home right now.

I'll have to break out the snowshoes tomorrow. Out east it's snowing like a mother.

Nice fish Greg!
It is tough booking leave around the weather...mother nature can be a cruel old bird to the Steelhead gang.
Our rivers are smashed.
Oh well...I hear the Dirty Burt is fishing well...
;o)

Greg,
If its any consolation God hats Norland aswell. Geesh...we all hate Norland!
Gas is cheap...get in that Jeep and find some water! West side of MI has some awesome options.