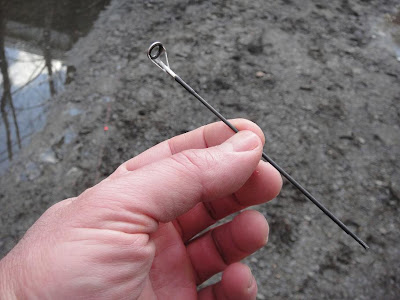 Ice on the guides is one of my biggest pet peeves when it comes to winter steelheading. After a couple of drifts the line struggles to go through the guides and the end result is the float stalls and the reel keeps spinning and there is a pile of line in the water. The line has to be reeled in and the rod taken apart and the ice removed. After 2 or 3 drifts repeat the same process. Over and over and after a while is starts getting old. The other thing to do is whack your rod in the water to remove the ice. The problem is when your cranky, you whack a little harder. It was a chilly morning on the Vermilion, when I started fishing and the ice started to get on my nerves because it was only a couple degrees below freezing. Being lazy, I whacked the rod pretty hard and eventually I whacked a little to hard, more like a "hulk is mad" whack. To my horror I watched the tip of my G Loomis GLX slowly go down the line and a volley of curse words followed. The GLX was suppose to be caveman proof. Over the years it endured being dropped on rocks, pile drived into the ground, floats hitting it, cracking it against trees and whacking it in the water to remove ice. Maybe the years of a false sense of security finally caught up to me. It was only nine in the morning and I wasn't going to call it a day because the tip broke. Disgusted that I couldn't control my temper, I had to make use with what I had a - 12'5" rod.

The Vermilion for once actually looked good - slightly stained, not the typical coffee with a cup of creamer added. The only reason I fished the V was the streams out east to still too high due to snowmelt. Since the Vermilion is the farthest west and generally not considered a part of the snowbelt, what ever little snow was long gone and barely effected the flow. With the nicer weather and closer proximity to Cleveland's suburbs, I knew the Rock would be a bustling place. 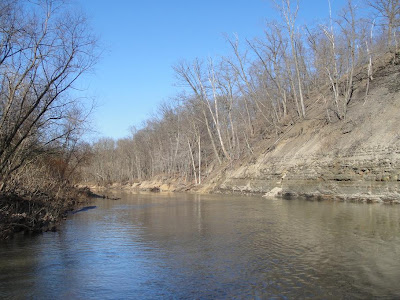 It was a mixture of males, females and skippers. I heard yesterday the fishing was better and I took it a lot of walking and banging away to get into the double digits. The fish were hanging in their typical winter haunts - tailouts,  flats along the cliffs and deep pools. I didn't find the pods of the fish but it was enough to sooth my disappointment of breaking my rod. Even though there were plenty of people, there was enough spots to fish without nobody really bothering you.

Tonight I must crafted my a large beaver accidentally hooked himself and quickly dove to escape and the tip of rod broke excuse and mail my broken piece of manhood in the hopes I get a new one free of charge. For the time being, I must use the Raven rod I have stowed away in the basement as my backup. The rod can also serve as a pole vault, whenever I feel the need to jump over streams. Compared to the Loomis rod the Raven will feel like a telephone pole. Might need to stock up on BenGay.
Posted by Greg at 6:35 PM

Nice blog! I added you to my blogroll. Look forward to future posts.

i have a trick to stopping ur guides from freezing. I take Stanleys ice off paste and put it on the guides line and on the reel a hour before i fish. When I get to the river I put more on the guides. Also short drifts help too keep the line out of the water as much as possible. Enjoy your writings keep it up tight lines.