Steelhead Alley In The Winter 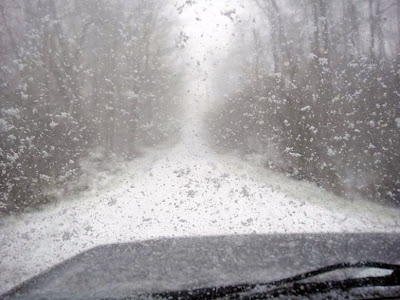 The Alley got its first significant snowfall of the year. There's something about the first snow of the season. It ushers in the winter steelheading season. This the time of the year when only the most hardy anglers venture out. The Alley can get tremendous amounts of snow, especially along the eastern shore of Lake Erie. Lake effect snow as we call it, is produced  when a cold air mass moves across long expanses of warmer water, warming the lower layer of air which picks up moisture from the lake, rises up through the colder air above, freezes and is deposited on the downwind shores. That's why the eastern side of the lake gets more snow, because of the lake's position. I live in the western suburbs of Cleveland and we rarely get lake effect snow. Where I live we can get 3 inches of snow and out by Ashtabula they can get 3 feet of it.

Today, I'm on Conneaut Creek and they got dumped on. As I drove east, I hit several bands of snow coming off the lake. A few flakes would flutter about and gradually it got more intense and finally I would hit a squall. I had to pretty well go to a crawl and hoped motorists behind would slow down. Generally, squalls are short lived and I was back to good visibility. I reach the exit on the interstate and head for one section of the creek. The roads are snow covered and my Jeep handles it well. I drive down a country road and turn off onto snow covered dirt road. The hill going down to the creek is fairly steep. My Jeep Cherokee has BF Goodrich mud terrain tires and they grip the road hard as I make my way down. I reach the end of the road and I'm the only person there.

I step out the Jeep and I'm standing in about a foot of fresh snow. The temperature is about 28F and the winds are light. I dress and I'm snug as a bug. I use a balaclava to keep my neck warm and a toque cover my head and ears. In both pockets are hand warmers and I carry a small micro fiber towel to dry my hands. The walk to the first pool isn't far, just across the campground. I trudge through the snow and in past years I've walked in deeper snow. I see the creek and the surrounding landscape is a winter wonderland as the trees and bushes are covered in it. Hard to believe that just 3 months ago, the leaves on the trees hadn't turned color and I was complaining about the heat. The creek is emerald green in color and I start at the head of the pool and work off the main current. 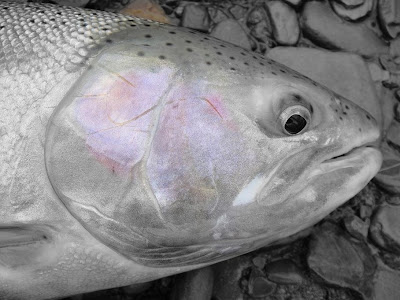 Flakes of snow swirl about and very soon a band of snow will be going through. I look to the north and the sky is dark. The snowfall becomes more intense as I strain to see the float. Flakes pelt my face and my hands are getting wet. I pull my hood over to keep my toque dry. I keep my head down so my face isn't getting the full effect of the snow. It becomes so bad, that I reel in the line and wait it out. I get out of the water and sit on log. Eventually, the snow stops and I enter the water and start fishing.

The pool I'm fishing is small. but always holds fish. It doesn't take long for the first fish of the morning as I land a small female. She looks like a recent arrival as she's bright silver. The next fish is a large male and he's more dark. He has a mixture of charcoal, silver and red. The pool gives up a couple more fish and I start to head downstream to another one. As I walk down I brush along the willows and snow falls off the branches. The flakes appear again and another band of heavy snow hits. I hear the flakes land on my hood and look across the creek. The falling snow dances and once it hits the water instantly disappears. With this much snow, I can't see anybody making the long drive out. Most of them wouldn't dare attempt going the hill where I'm at. If we get anymore snow, I'm concerned I might get stuck.

The snow relents and I scan the pool. I watch the current hug along the opposite bank and follows the bank and it curves and eventually tailouts at the next riffle. This pool is deep and long and I slow down my presentation. The float drifts along and slowly goes under the classic winter take. Due to the cold water the fight isn't very long in duration. I see a large female come to the surface and she doesn't offer any resistance. I gently pull her along the edge of the rocks and I use the hemostats to pop the hook out. I use my boot to push her back and she slowly swims off back to her resting place.

With the colder temperatures coming next week, it won't take long for the streams to ice over. The sides will freeze over first and the water temperature will eventually reach freezing. When that happens, slush appears and it makes fishing virtually impossible. I've seen streams clogged in slush and that's why I don't get up early. Every season, when I get my morning coffee, I'll drive down to the Rocky and see guys fishing in vain in the morning hoping to get a drift off. If the sun is out, I'll wait until afternoon and by then, most of it is burned off and the added bonus is those guys that fished in the morning are long gone as they succumbed to the cold.

I hit a few more spots along the river and the fishing for the most part has been slow. But that is expected in the winter as it can be very challenging. The foot and half of snow when I arrived is over 2 feet deep. I lug my wet waders and boots into the tote box and close the hatch. I start the Jeep up and back up towards the gate. The Jeep is in four wheel drive and start to accelerate when I hit the hill. The Jeep's tires digs in and the engine roars. It goes through the snow like a tank and with little effort makes it to the top. Before getting on the interstate, I stop at McDonalds for a scalding cup of coffee. It hits the spot and I get on the interstate. The highway is free of snow and ice as crews have been out all day clearing snow. The weather report isn't calling for any snow for the rest of the day. I set the cruise at 70mph and enjoy the ride home.
Posted by Greg at 10:13 PM