Wishing For A Permanent Vacation - Day 1 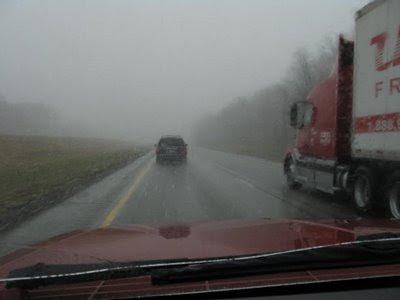 I officially started off my annual April vacation sitting in front of the computer Sunday night breaking into a cold sweat. On the screen was a giant green blob invading the state of Ohio. Like an ameoba, it's tentacles were slowly snaking its way towards the alley. The only thing I could do is go to bed and in the morning either breath a sigh of relief or throw the computer out the window. Lucky for the computer, the fishing gods took pity on me and the 1/2" of rain the weather nerds predicted never happened.............go figure 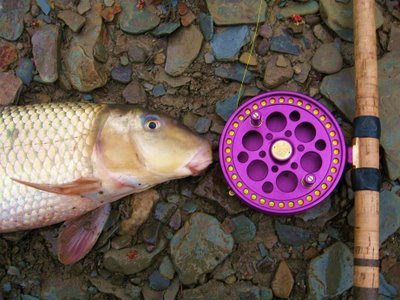 As with every vacation, I try to make stops at all of the river including the much maligned Vermilion and Rocky. It was go east young man as none of the rivers went up, but it would be an incredibly shitty day weather wise. This was typical April weather on Steelhead Alley - one week it's sunny, upper 60s and elbows and assholes. Then today it was upper 30s, sleet and wind. The type of day that brings a smile to my face.

The constant drizzle was a pain in the ass and I forgot to bring lens cloth. Wiping glasses with polyester doesn't do a very good job and I often had to stop fishing to wipe my glasses. In the skinny water I could see fish lying along the ledges and I found the pin was more effective. The fly rod came in handy as I worked several riffles and pockets that gave up some fresh fish. But it was mostly droppies holding in the deeper pools and holes. 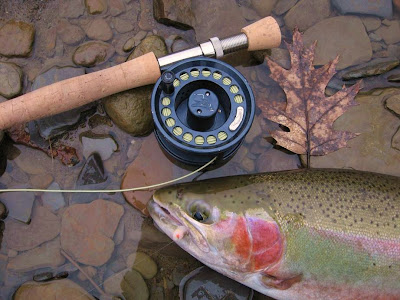 With April showers come the pesky Lake Erie suckers and they can pollute some of the best steelhead holding areas - pools. This morning I had a "hillbilly bonefish" suck up a sac and it was large golden redhorse sucker. Redhorse's generally dislike holding in faster water and most steelheaders will start foul hooking them as they pile in any available slow deep water. Usually when I hook into a sucker, it's time to move. Moving around was the theme today as I had cover a lot of water to find fish. In every spot, only a couple would come out to play. 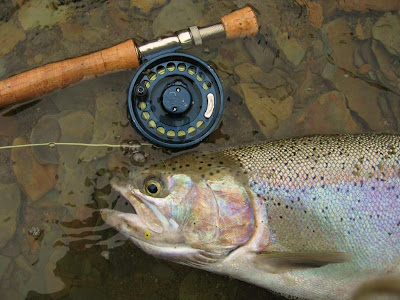 The low and grey clouds hanged around all day and the drizzle and sleet rarely let up. Even the weather was sub-par, the water conditions were great. By late afternoon I had enough and satisfied with the day's results. On the way home I drove into some lake effect snow and visibility was about a quarter mile. Luckily it was wet snow and the temperature was still above freezing. Back at it tomorrow and it's winter steelheading........
Posted by Greg at 6:16 PM