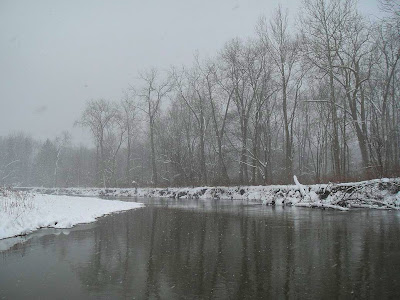 It was the perfect day for a hardcore Ohio steelheader. Almost 2' of snow on the ground and rotten weather on the way. The Alley was cloaked in a fresh blanket of snow. I trudged thorough it as I made my to the river. The snow was so light, that it made walking effortless. The hemlocks, maples and oaks were covered in a fresh coat of powder. There was a crispness in the air that was inviting. It wasn't very cold, maybe in the low 30s. The trail gradually took me along the river and it was running clear over the shale bedrock. The cliffs showcased a magnificent display of icicles. The trail ended and I walked along the river. The deeper pool and runs had a deep dark emerald green. It's only during the winter when the water is that intense. Somewhere deep in the green were steelhead. 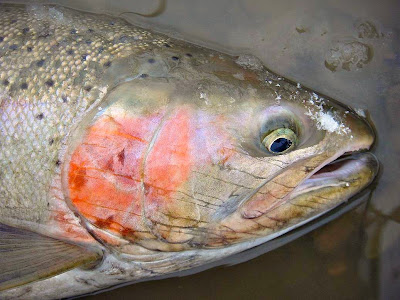 The fresh snow concealed any evidence of the anglers from the previous days. This morning there wasn't a soul on the river. The only sound I could hear were the nuthatches, chickadees, geese and the babbling riffles. The pool looked inviting as the current swirled around the logs and submerged rocks. I stood on a sandbar and casted out towards the bank. To the north, the sky had darken and flakes started to fall. Gradually it started to intensify. Through the flakes, I watched the float slowly move towards the tailout. It hesitated and slowly went under. I slight jerk of the rod and I feel it throb. Not much of fight but that's expected when the water is barely above freezing. The surface boiled as I watched a small male surface. He was in full winter colors. Bright red cheeks and charcoal along the underbelly. But what stood out was the series of scars along his face. Not sure what caused them, but it gave the fish a rugged look. I released him and watched quickly dart back into the depths. 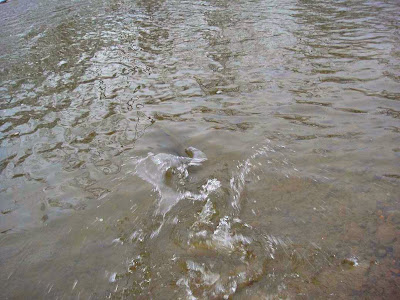 I worked another pool and I watched a male cardinal dart from bush to bush. His bright red plumage stood out against the white. I was somewhat mesmerized by the bird and had to focus my attention back to fishing. This was a favorite pool of mine. It was a classic Steelhead Alley pool - narrow, full of lumber and gradually flattens out. Over the season, I have pulled out some impressive specimens from this particular spot. It has rarely failed me over the years. With some adjustments I got the float as close as possible to the lumber. I gingerly guided it along the branches and got it right in the middle of the bubble line. I watched the float tap once and it was taken under with authority. This wasn't a small fish, but a large predator waiting in his lair. The rod slammed in an instant. The surface boil and the fish quickly charged downstream. It was a battle of wits as I had to keep it from running into the submerged trees. I took charge and the battle was quickly over. I grabbed the hen's tail and she didn't have a blemish on her body. Silver along the sides, ivory white belly and a darkish gun metal blue on her back. 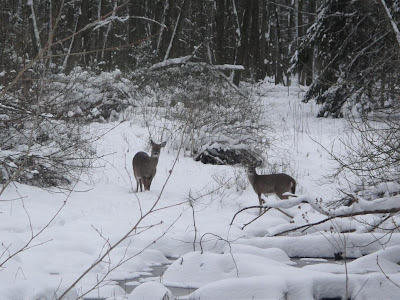 I ventured further south into another metro park. With a fair amount of snow, the trails in the park were a busy place today. People walking dogs, families taking a walk and some skiing. I was the only angler to make an appearance. Time unfortunately wasn't on my side today and I had to make a decision whether to go up or down stream. Down stream meant blazing a trial through the snow, buckthorns and downed trees. Upstream, it was a brief walk along the trail and down towards the river. The latter made sense as crossed over the riffle. It was a medium size pool that spilled along the bank and tailout hard. The current was probably too hard and shallow to hold fish. Off the current, the water flowed much slower and there was a sand bar. It take much thought where the fish would be. It turned out to be the right call as I caught five fresh fish out that spot. A couple of hikers watched from the bank and gave a thumbs up as I held up the fish I just caught. Both of them were unaware that trout that big could be caught that far up river.

Turned out be a great day despite the weather. That's why I love winter steelheading. The challenges and the fruition of hard work can make putting up with the frozen fingers and feet all worth it. Sadly, just as fast as the snow fell. It will be probably all be gone next week as we'll get a brief taste of spring. It's a shame, because I wanted more snow.
Posted by Greg at 8:41 PM

Very cool ..looks like a good day out there for the hard core fisherman.

BTW...going with Ray Lewis and the Ravens..