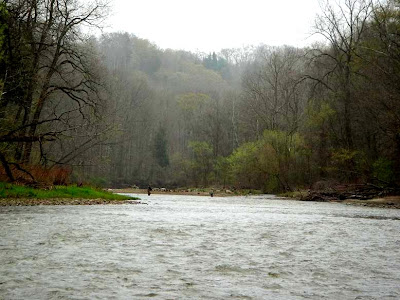 Spring literally exploded on Steelhead Alley. Weather records fell like dominoes. For three days we had temperatures well in the 80s. It felt like July instead of March. The trees have started to bud and toads and spring peppers filled the forests with a chorus of songs. It was so hot that I had turn on my air conditioner, which was unheard of for the last week March. Instead of bundling up, I was dressed for summer wearing short and tee shirt.

With the summer like temperatures, the rivers were a bustling place filled with anglers. Cars occupied every available spot in the metro parks. In any other year, there would be the regulars. But this week, the fairweather fishermen were out in full force. They're pretty easy to spot. Waders in mint condition. Not a blemish on their jackets. They could be models from a Orvis or LL Bean shoot. Whenever the weather is delightful, I go off the beaten path in search of solitude. However, the summer like conditions were thankfully short lived as the temperatures were to go back to normal. That meant the woods be quiet and the fairweather fishermen would retreat to the comforts of their homes and wait for better weather. That would be perfectly fine with me. 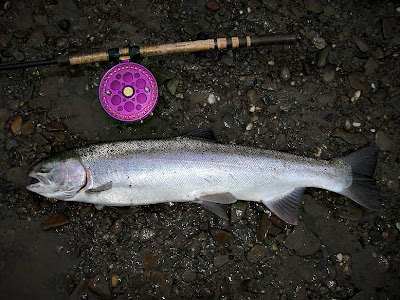 It was refreshing to feel the warmth and abundant sunshine after a long dreary winter. As expected living on Steelhead Alley, the weather can turn at a moment's notice. It was a dreary, foggy and chilly when I left early in the morning. I wanted some normalcy as the weather threw everything for a loop. Many of the fish in the rivers, started spawning when the water got into the upper 40s. The return of typical March weather meant the the fair-weathered anglers would return to their places of comfort.

I pull off the side of the road in one of the metro parks. The surrounding woods was full of bird songs despise the chilly conditions. The air feels crisp and I can see my breath. I'm bundled up trading my tee shirt for a fleece jacket. I dress and start to head over the river. It's a short walk of crossing the road and walking a short trail. Above the river, I see it cloaked in mist. I climb down the bank and enter the water. The river is slightly stained and it's warm to the touch. I suspect that some fish are above spawning, but I know some have finished spawning and dropped back into the pools.

It didn't take long for the first fish of the morning. A large spawned out hen nailed a pink sac along the seam. She ripped off a lot of line and fought furiously. I slowly pulled her along the shore as she rested on the rocks. She was now long and sleek, but her body didn't really show the rigors of spawning that I've seen in other fish. Other than a few scars on her belly, she didn't show any wear. I popped the hook and she quickly darted back into the pool. 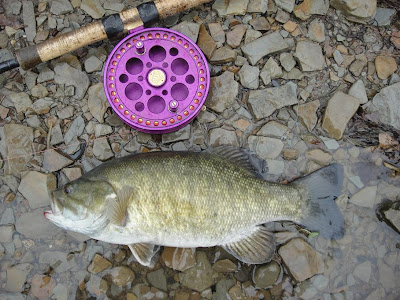 This section of the Chagrin is popular and it doesn't take long to see others show up. Where I crossed over there's plenty of gravel. There's 3 anglers and from the gear they have I actually know where they're heading. They scan from above and I see the grim looks on their faces. They see a stained river. They call out if I had any luck and I give my usual reponse

I don't want to give them a reason to hang around. They continue along the bank scanning the shallows. Again they asked if I saw any fish spawning

However this area is rich in gravel and often attracts a lot of fish. But I really couldn't see any fish on the gravel because the cloud cover was so low and thick. I didn't notice any dug out beds either. That was the case as I walked farther up - no beds or fish. None of the pools or runs produced any and I suspect that the majority of fish had dropped back or the bite was off. As I walk back and fished another run and I could see a group of four anglers. All of them chattering up storm and scanning the water for any fish. I'm thinking just chuck a fucking fly into the water and work the run - quit complaining. But I can still hear them bitch about not seeing any fish. They stood around looking clueless and decide to march on looking for fish. They walk by and one of them yells out "Any luck?" I grunt and give my standard response of nothing. The gang slowly walks around the bend and I have peace and quiet again. But boredom quickly settles in and I feel restless. I must move on to better water and my home waters are calling. I walk across where the gang was fishing earlier and I see one lonely male just waiting. I think poor bastard. 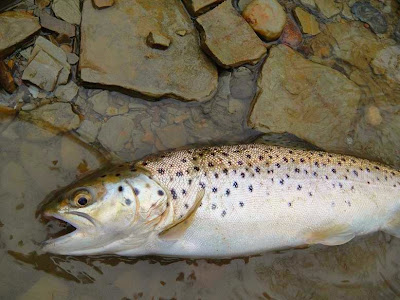 I hopped back on I-90 and stop at the lower Rock. The river looks the same as the Chagrin did. I sat on the wrong side of the fence and should of fished it. Bubba was fishing below the bridge and I joined him. Not a lot of action and we moved downstream. I suggest fishing the chutes - a long slender run that hugs along the cliffs littered with rocks, holes and trees. It turned out to be a good call as we banged a lot of skippers. Another friend was fishing further up and we joined him. The sacs didn't seem to work and we figured that these fish have seen sac after sac after sac plus the gazillion shiners didn't help either. It was time to think small.

Switching to beads and the color of the hour was what everybody calls "snot". For the record I'm not a big fan of beads. They belong on jewelry not on a line. Do they work for sure but I'm old school and I prefer Poor Richards singles cooked in their secret recipe of muric acid. But I forgot my singles and I save them for special occasions - super clear water. The guys banged them pretty good considering the water was murky and the flow was ripping hard. These fish had a nano second to grab them beads as they flew by. I was very impressed.

Because of the warmer weather, the other residents of Lake Erie started making their runs -the smallmouth, channel cats, and white bass. But all of them were also following the moveable feast - shiners. But smallies are not a finicky bunch as I had one hit a white sac of steelhead eggs. The fish of the day was a small brown trout that hit one of Bubba's beads. A refugee from Pennsylvania and sporting one of the nastiest head wounds. Not sure what caused it as we had theories such as mergansers, gulls or some jerk that decided he wanted to mark the fish by chewing into its head.

Hard to say how much longer our season will go on. This hot weather over the past 10 days hasn't helped and I fear that the majority of fish are done. We won't know until the next high water whether another run has commenced or all of them had bid us a farewell until this upcoming fall.
Posted by Greg at 9:14 PM