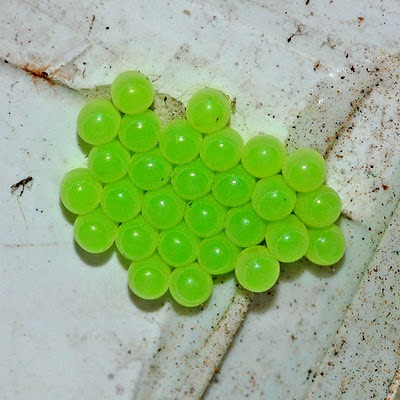 Eggs can make or break a day and I learned that during the past two days. Winter's grasp on the Alley has finally weakened. All of the rivers were free of ice. Since I had nothing scheduled at work for Friday, it was the perfect excuse to come up the 24 hour flu. You couldn't ask for a better day as the river was slightly stained and the temperatures were to be in the low 60s.

Conneaut was a bustling place this morning when I rolled in. I watched a group of anglers heading upstream. I took that as the cue to go downstream. I wasn't going to be raking gravel, instead I was after staging fish. I walked along the tracks and I looked over to see a guide with three clients working the gravel. I look down from them and the pool was all mine. I slipped down the hill and quietly walked on the opposite side of the island. I avoided detection and started at the head of the pool.

This pool can be a killer in the spring. At times fish can stack in there like sardines. In the spring it's mostly skippers and you practically have to club them off the sacs. It turned out to be like that morning - lights out. I started piling up numbers like crazy and those scrappy little skippers kept my hands full. The problem was I started to run low on bait. I forgot my fly box home. It was a little after noon when I ran out of bait. I was bummed because I felt I could had a banner day. I called Bubba and gave him two thumbs up and told him to go overboard with tying sacs tonight.

Late spring is when I start running low on eggs. Some times I'll keep a couple of steelhead hens for eggs and give the fish to one of my co workers. So far this spring, I haven't caught a decent sized hen, plus I felt I had enough eggs in the freezer. When I go home I pulled the largest pack of eggs to thaw out. The eggs inside were a little loose and over the winter it must of leaked. I shrugged and figured it wasn't too much to worry about........d'oh.

Me and Bubba drove out in the wee hours and arrived when it was still dark. Nobody had pulled yet and we quickly dressed. We reached the pool and camped out waiting for the first light. In 45 minutes, there was enough light to see the floats. Bubba started getting into fish and I didn't. I popped the container open and sniffed, nothing objectionable. I started to make adjustments and still nothing. I was perplexed and starting to get annoyed. He couldn't keep them off the hook and I was posting a goose egg. He was serving them T-bone and I was offering pig slop. I knew I had funky eggs and immediately toss them. I did have some gulp minnows with me and I managed to toss the skunk off my neck.

But that's what happens when you use uncured eggs. I swear by them and I rarely cure them. Cured eggs do work as Bubba was using them and he was hammering them. He took pity on me a shared his eggs. I was more than happy for him as he doesn't fish as often as me. The action for him was fast and furious and he eventually ran out of bait.

When I got home I examined all of the remaining packs in the freezer and all of them were sealed tight. I had enough to get me through April.
Posted by Greg at 6:00 PM

Greg,
I have fished with Don Matthews, Jeff Novak, and Mark Defrank. I learned about your blog from Don's website. I have enjoyed your blog for over a year now. I have used you pointers and have greatly increased my catch rate. I bought eggs from Craig at Erie outfitters and I had a question about them and don't know how to contact you. I didn't want to ask those guys for you number or email. I didn't know how to get hold of you. If you would email me so I can contact you I would greatly appreciate it.
Rick
emigh7@verizon.net