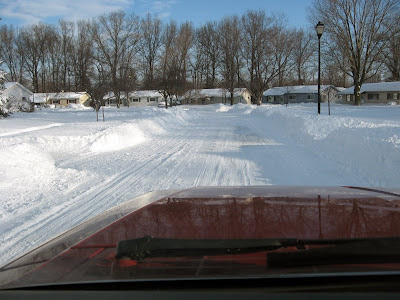 We got hammered here on the Alley and hopefully this is the last winter storm. It hit Friday afternoon and didn't stop until late Saturday night. Saturday was spent shoveling endless amounts of snow. I huffed and puffed until I thought I would keel over. The entire driveway was done and I retreated into the warm depths of my man cave. A couple hours later, the snow started to pile up. Not wanted to wake up tomorrow and shovel 4 feet of snow, I quickly dressed and chugged the rest of my beer.

I greeted with an angry wind from the northwest and driving snow. Generally, the western suburbs are often spared from the lake effect snows due to the prevailing winds and the eastern suburbs are higher in elevation. I kept at it until eleven o' clock, I had enough but the driveway was all done. I crashed on the couch and it was lights out. I woke later that morning and heard the sounds of snow blowers. I peeked out the window and it was snowing again. I glanced over at the driveway and groaned - more snow. At least it was light and powdery. My hard work last night paid off as I only had a quarter of what my neighbors had. The snow was so bad that the mail wasn't delivered Saturday and I don't blame him as I wouldn't want to walk in that shit.

After digging out, I decided to go four wheeling. The streets were a mess and people were shoveling everywhere. My Jeep plowed through the snow like a tank. I bombed down the streets as people were spinning out or getting stuck. I drove down to the Rock and it was slushed to the max. All of the parking lots were covered in 3' of snow. I called my friend and said fishing was out of the question for tomorrow and the power plant would be the only option. The snow was relentless and another squall came off the lake, even in four wheel drive, I was crawling as I could barely see the other car in front of me.

I couldn't imagine how much snow fell out east. I pulled into the driveway and the Jeep inched its way into the garage. I got out and there was another foot of snow. I cooked a hearty meal to fuel my body for the next dig. The weather channel informed that the storm was pass in the evening. The final tally was 24" of snow in my backyard. Several drifts in the front of the house were 5' high. When it was all said and done, it was late evening and I was exhausted. It doesn't help when your grossly out of shape and have a lousy shovel, I fell on the bed and hit the pillow hard.

I peeked out the window and the sun was shining. As my neighbors dug out, I drove out to the lake for a day of fishing. The roads were still a mess and I-90 looked resembled an ice road. Early in the week, the pack ice got blown out and the winds turned the power plant discharge turned into mud. But the winds shifted and voila - instant pack ice. The water cleared in a matter of days.

I picked up some shiners and drove to the plant. The usual suspects showed up and with a combination of a Cherokee, Avalanche and a Durango we plowed through the snow bank and blazed a trial. When we arrived the plant was discharging warm water and the fish were active chasing baitfish. But, it turned out to be a slow day as we picked some fish here and there, but sure beated shoveling snow. A couple of guys even hooked into several carp. During the winter, carp and shad often reside there all winter as the water temp is in their comfort zone. A couple of carp almost tipped the scale at 20lbs.

On the weather front there is a warm up later this week and it's going to blow out the streams for this upcoming weekend. On the flip side, the spring run is around the corner.
Posted by Greg at 7:24 PM