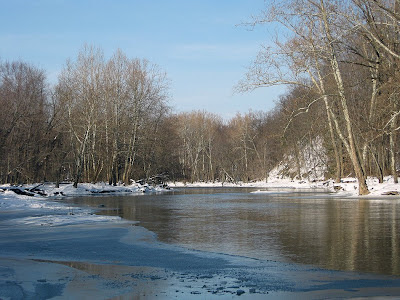 There is talk about gas getting near $4.00 per gallon this upcoming spring. When I moved to Ohio in 1998, gas was going for 99 cents and filling my car put me back $15.00. If you told me back then that in ten years gas would be almost $4.00, I would of laughed my ass off. Lately, I've felt the pinch as I filled my Jeep this morning and headed to the upper Grand. From my house to the upper Grand is about 56 miles one way and round trip it's 102 miles. I love my 1991 Jeep Cherokee, but it's a pig on gas. Just doing a round trip I'll use nearly half a tank. That's in part because of the off road tires, lift kit and my lead foot. The higher gas prices haven't stop me from fished the Conneaut or Elk. But since the Grand has been either blown out or frozen over, I haven't fish it that much this year. This weekend, I would make every opportunity to get out there.

On to the fishing front. The Grand was running at near perfect conditions for March. Saturday, I fished close to home had a successful day. The bright skies made the gusting winds bearable, but I felt like kicking myself in the ass for not going to the Grand. The Grand was running at 420cfs and the window was going to be shut as the temperatures were to be in the 50s on Monday. I left fairly early Sunday morning and arrived at the river around 6:45A.M to a chilly morning. There was slush in the river but I knew farther downstream I would be able to get around it. 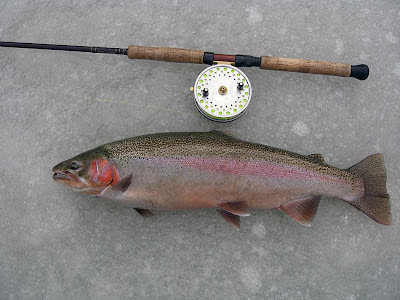 The trail leading to the river was well traveled. The river was a perfect as it gets - slightly stained and a moderate flow. I crossed over and noticed there was a lot of anchor at the bottom. I was concerned that the cloudy conditions would not burn off the slush, BUT the weatherman promised temps in the 40s this afternoon. I walked almost a mile and hit my first spot - a tailout before the river made a huge turn, we called it "the bend". This section was fairly shallow, no more than 2' deep and I knew where the shale ledge was. I adjusted the float and started to work the section. I was fairly slow as I picked up a couple of fish. The water was so cold as my feet started to ache after a couple of hours. Back upstream there was a huge section of shelf ice and that was the cure for cold feet. I walked out to test the ice, generally I don't like to fish off ice for a variety reasons. I felt confident enough that it would hold - for the time being. I started to drift the tail end and I started to hit fish immediately. Even though the water was cold, the fish fought well and I had a difficult time keeping them from going under the ice. Luckily, a very long rod and a heavy tippet made it a lot easier to heave them onto the ice.

The slush was a huge pain in the ass as it constantly screwed with my drifts. I had to use a lot of shot to bust through it. But around noon the slush finally disappeared and I was able to fish more effectively. Then people started showing up and the large section of ice gave plenty of room. There was plenty of fish to go around as several others above and below me were hooking up. It was a busy Sunday as I could see a lot of people fishing upstream. Once the sun came out, I noticed it got a lot warmer. By late afternoon, I could hear ice and snow falling from the cliffs. Then I knew it got a lot warmer when the shelf ice made a huge cracking noise. It startled me and the other two anglers down from me. I knew it was time to get off the ice and jump back into the water.

The majority of fish were in fine condition and several hens were ripe with eggs. Meet several anglers who made the journey all the way from Kentucky. In all, everybody went home happy and I stayed until 5:00P.M because I knew the end was coming near. By tomorrow the river will start going up and eventually blow out due to runoff and rain.
Posted by Greg at 6:36 PM

That is beautiful fish.