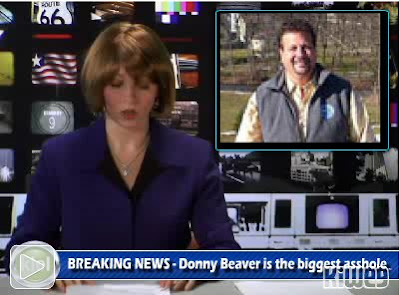 Donny Beaver, the monster douchebag decided to drop his court case against state of Pennsylvania after the state won its case that the Little Juniata was in fact deemed a navigable river, therefore allowing public to access. His legal team informed him discontinuing the appeal keeps Judge Kurtz's decision legally binding only on the Little Juniata. It's one small victory, but a victory nonetheless for Joe Angler.

Beaver now has his sights on the Lake Erie tribs and their world renown steelhead runs.   I was informed from a friend that Beaver's club was shopping the Conneaut to secure waters for their members and it lit a fire under the local steelheaders. The ODNR is opposed to private waters that denies access to the public. There are ways the state could counter act those moves but they're waiting to see to see the outcome.

Personally, I think Beaver is a scumbag and he tries to come off as some noble conservationist. He's nothing more than a slimy businessman going around flashing wads of money to landowners in the hopes of securing private access for his club members. Since he's charging thousands of dollars for membership, he's flushed with cash. Here's a quote from him about preserving streams "The highest valued properties are along trout streams, and they're not being bought by guys who want to conserve it," Beaver said. "They're guys who want to make money from changing it. ... We're trying to protect these fish. That's what started all this." This guy is so full of shit and he's standing knee deep in it. He locks up the property and stocks with trout as fat as soccer balls. He has plenty of losers willing to line up and fork over thousands of dollars to fish for these "wild fish", who's he fucking kidding! If he's such a steward of the streams and a staunch conservationist, then he would grant the general public access.

Beaver couldn't give two shits about you and me. He's in it for the money and a lot of these idiots are willing to pay through the nose to join his stupid club. His club members are benefiting from me and the others who shell out money for licences. That licence money is what keeps the Castalia hatchery operating and producing steelhead. As long as people like Donny Beaver throw money at landowners, the ODNR is hamstrung. The only thing the ODNR could do is stop stocking the Conneaut all together or start purchasing property. But until the state figures out what to do with this, we'll be on the outside looking in.

The next time you see one of Beaver's guides on the Elk or Conneaut go over and kick them in the balls.
Posted by Greg at 11:23 AM