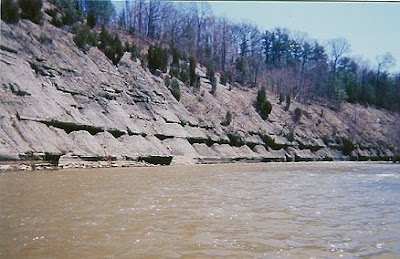 Whenever I think about fishing for steelhead. I see myself walking along a river in British Columbia. The surrounding mountains are cloaked in mist. I look into the water and it's a beautiful mixture of blue and green hues. The ancient rainforests are covered in moss. It feels like place where man's footprint rarely ever set foot. Instead, I'm looking at a boiling river of brown running along a muddy bank next to series waste treatment ponds in Northeast Ohio. Hardly a place where an angler would think of steelhead would exist, much alone in water that resembles my morning cup of Joe laced with heavily with cream.

Why do Ohio's streams run dirty? It's all about the clay and this part of the Buckeye state has a lot of it. Whenever it rains or the snow melts, the runoff deposits a high volume of it into the water. Depending on the drainage area, most of Ohio's streams can clear within a couple days to over a week. The problem is even worse when streams thaw and large chunks of ice start flowing downstream. Those chucks of ice gouge out the banks and dump a ton of sediment into the water. Even when water levels drop to fishable levels, it can take some time for those clay particles to settle.

For some, they wait patiently at home for the waters to take on that green hue that the Alley's streams are noted for. But for the hardcore steelheader like me, I don't sit on the sidelines, I grab the gear and head out regardless.

Today, I'm on the Grand and she's notorious for running dirty. That's the result of the river running through a large series of swamps on the far upper reaches. Even when the river is low, there's that hazy stain that hides fish and gives them security that other streams rarely offer.

On the drive out, I check the flow data and the river is running over 1100. The majority of anglers will never fish at that flow. They consider it far too high and muddy. At that flow, it limits my options, because I can't cross anywhere without me being swept off my feet and drowning. In cases like that, I'll concentrate my efforts on the lower stretches because of the easier access.

I arrive my destination and the wind is howling out of the north. It's a typical March on the Alley as the weather has fluctuated wildly. The temperatures have been below average for most of the month, keeping the fish in a holding pattern and off the gravel. I make the long walk down and eventually I see the river trucking along. The river races along the long sweeping pool and swirls about. I step into the water and my boot immediately disappears. I probably have a murky 12" to work it. Muddy waters aren't going to stop me. Over the years, I've learned the secrets of fishing it.

A lot of anglers aren't keen on fishing in these conditions. Fly fishermen would have a toss a fly the size of a chicken to get a strike. Even some of the bait guys think the water is too dirty for fish to detect the scent of a sac. I've seen some guys tie sacs almost the size of a silver dollar. But those fish do have an incredible sense of smell. Generally, I use sacs about the size of a nickel and no bigger. There's no reason use that many eggs per sac. But some guys will swear double bagging is the only way to get fish. If I double bagged, I would run out of sacs within a couple hours, because I use uncured eggs. Plus I've debunked that myth many years ago about running double bags. The key is where to find them and I have a knack for knowing their muddy haunts.

Whenever the waters are off color, you would be surprised how close to shore steelhead will hang. I've caught fish that were only 10' away from me. Usually when the rivers are running muddy, the flows will be higher than usual. So fish often hang off the main current. Since the bottom or any features are not visible, the only thing that helps me are the bubbles. The speed and movement of the bubbles will tell me where the current is at its slowest. This is especially helpful when the water is colder as steelhead prefer to be at the tail end of pools or runs. The other thing that gives me the advantage is my memory. I have photogenic memory of spots on many rivers. I know where every cut, rock and shale ledge is.

Since there's nobody here, I elect to head down to a tailout just above a small feeder creek. For the past couple months the lower section had been locked up in ice. As I wade down, I see a large branch from a tree protruding from the water. The tree is a latest addition to the pool. The wind gusts from downstream, but it actually helps as the wind blows the line up and slows the float down. Slowing it down gives me that little extra time for a fish to detect the sac. I work the tailout to see where the fish are holding and for 30 minutes, I get nothing. I make adjustments as I move the sinkers lower to get it down and keep it down in the strike zone. I continue to plug away and my efforts only get me one fish. I suspect the fish might be holding closer to the opposite side as the current isn't strong. I wade right in front of the tree and cast out. I fire it across and watch the float land. I pull it in and mend the line. I work that part throughly and I come to the conclusion that fish aren't holding here for whatever reason.

The next spot is a run above the pool. It's a tough going as the current pushes against me as my boots dig into the rocks. I feel my legs starting to burn as I finally get into shallow waters. I get to the halfway point of the pool and I can see a series of waves. This is where the shale bedrock is and directly off of it is a ledge. But the current is ripping pretty good through here. I don't cast very far out as I simply flick the rod and toss the float out. I make a series of adjustments, before I catch my first fish. I watch a small steelhead leap from the water and dart about. With a 8lbs tippet and I can haul in it fairly quickly. My gut tells me that fish might be holding in that slack water right above the tailout.

That's where the action starts as I start hooking into fish. Some of them on the larger size as they rip up and down the pool. They race towards the middle in the hopes of tearing the hook out. I apply side pressure and steer it clear of the current. From the mud I see a beautiful hen, bright as silver. The high water has ushered in some fresh fish as they head up river to spawn. I move her next to the gravel bar and I quickly pop the hook with my hemostats. Immediately she disappears into the murk and I wonder how far she will continue up river. For the next hour, the spot produces a mix bag of fish. Some of them are dark especailly the males, others are small and others brightly colored. It was decent number of fish despite the challenging conditions.

The run had given up enough fish as I look downstream. I walk down and the current was moving far too fast to effectively fish it. Because of the numerous rocks at the bottom, the current was all over the place. Far across, the current is going at half the speed. If I did cast across, the faster water would take hold of my line and create a massive belly of line. I would literally have to hold my rod straight up just to keep as much line off the water as possible. Mending would be extremely difficult if not impossible. If it was a foot lower, I would give it a shot. Since I'm scouting for the upcoming weekend and I only had the afternoon to fish, I'm more than satisfied with the results.

Not everybody enjoys fishing high and dirty. It takes a special angler that is dedicated to put in the time and effort in challenging conditions. There's times when I didn't sniff a hook up for the entire day and or times I couldn't keep them from biting. But was there one thing that was a consistent, I hardly didn't see anybody out. Nothing is more enjoyable then fishing an entire without anybody invading your space. Embrace the muck.
Posted by Greg at 7:05 PM