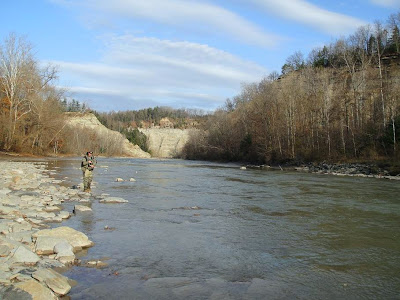 Every angler has a dream destination to catch their favorite fish. For me it's British Columbia's Skeena River and it's magnificent wild steelhead. I've often dreamed of fishing either the Kispiox, Babine or Buckley rivers, standing in the cold pristine waters looking up at the mountains cloaked in mist. Both my parents and sister live in that province, unfortunately it's a 700 mile drive from Vernon to the Skeena. So I had to settle for something a little closer to home and that was the Cattargarus or known by local steelheaders as the "Catt". Many years ago, I was suppose to go there, but high water made fishing all but impossible. For years, it sat on the back burner and I could never get anybody to go for a variety of reasons - work, rather fish the Rock or being denied by the wife. 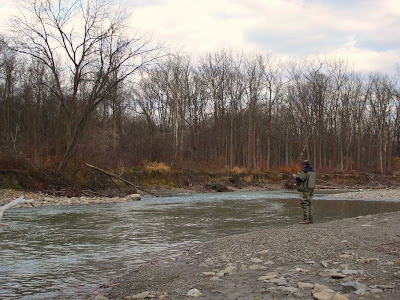 This past weekend I finally made it there and it's another notch on the rod. The Catt is considered the jewel of Steelhead Alley as it's the largest steelhead tributary that runs into Lake Erie on the American side. Steelhead can run as far as Springville Dam, which is 34 miles from the lake. The lower end of the river is flat and wide and loaded with gravel. There are many deep pools and holes that will hold fish. This is the most popular section of the river and is considered a pinner's dream. But, nearly all of it runs through the Seneca Indian reservation and you need to purchase a special licence. The middle section runs through the Zoar Valley one of the deepest gorges in New York. It's a wild, scenic place full of wildlife, numerous waterfalls and old growth forests. If you want seclusion and are anti-social, then the Zoar's your place. 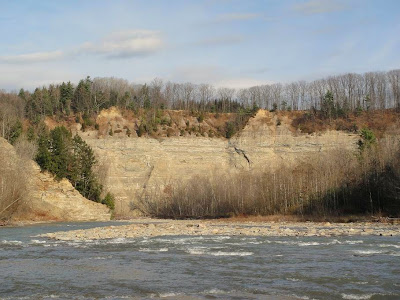 Several buddies went up several weeks ago as all of Ohio's streams were running low and clear. I received the call that the four of them nearly landed 30 fish. I course, I love to bust their chops and called bullshit. Kidding aside, I knew it was possible as the Catt was nearly unfishable this fall due to rain. Finally a break in the rain and it was enough time for the river to finally come down. Timing is the key, because when it blows out, it can take weeks for it come down. That's because it drains a huge area, a lot more than the Grand River. I've heard that some springs the river goes unfished because of the snow melt and rain. 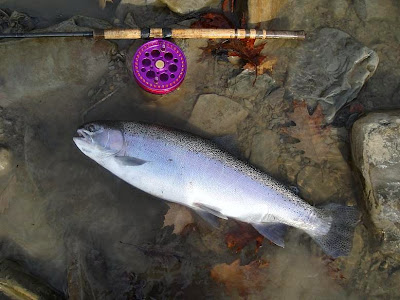 Earlier in the week, I talked with a friend about going. I was game and nothing was going to stop me from getting there. The river was at a perfect flow and I wanted to get away from Ohio as the fishing here has been pathetic. Hoping to get to bed early turned out to be another late night as I had a lot of things to do - tie sacs, watch the football game, and trying to purchase a licence online. I didn't hit the sack until almost midnight. With a little over three hours of sleep, I knew I was going to have my hands full with the drive out to New York and back. We left at 4:00A.M and it would be about a 3 hour drive. We finally got off the turnpike and the tripometer was over 170 miles if we drove another 40 miles we would be at the border. Not wanting to spend over $40.00 for a licence, we opted to fish outside of the reservation. The first place we stop was in the town of Gowanda. We parked practically next to the river and fished one spot the guys did well a couple weeks ago. The river had a chalky color and the visibility wasn't that great. Farther up there was a mix of bait and fly fishermen working one pool. I was pumped to hook into my first New York steelhead. The fishing was very slow as only one fish was caught. We fished several spots downstream and nothing was happening. This theme would be replayed over the day.........ugh 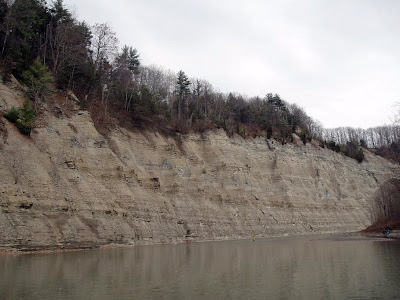 Due to limited time and not wanting to make the 3 hour drive back in the dark, we made the decision to fish the Zoar Valley. The Zoar wasn't very far from town, about 10 minutes south. We turned onto the road and the first thing I noticed a large sign greeting people by stating that nobody and I mean nobody will get any permission to hunt my property. To make his point clearer, nearly every tree along the road had a posted sign. We continued down the road and there were more signs and I wondered how much money this person spent on signs, probably thousands of dollars. I figure he would be the type of person to greet you with a shotgun pointed in your direction when knocking on the door. We dressed and started the descent down into the Zoar. When we finally made it down, I was awestruck at the height of the cliffs. These cliffs were 4 times the height of the ones on the upper Grand. The river itself was a mixture of blue and green colors. It mainly ran over shale as I could make out the ledges and cuts. It reminded me of a giant Ashtabula river with a lot of flow. Because there are limited gravel areas in the gorge streambed, fish push through it rather quickly. As a general rule, steelhead prefer to hold and rest over gravel, but there is fishable pocketwater and many shale ledges in the valley where fish pause temporarily on their upstream journey. The river was low enough that we figured some fish stopped to rest and waited for the next high water. 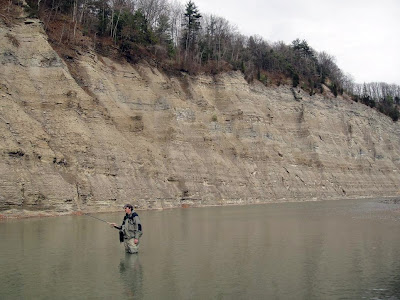 Right off the trail, there was a pool that held a lot of promise. It was fairly long with large rocks. Along the river, it was littered with rocks and at times it made walking difficult. As I walked I knew both boots were spitting cleats. Upstream I could see the typical V shape of the cliff that announced where the main and south branch of river meet. Even though on the flow gauge the Catt was slightly under 300, it had a pretty good flow. For the insane whitewater kayaker, this section would be a blast at higher flows. As for a drift boat, I would be hesitant to use it through here, because the shale bottom and ledges and many large rocks were barely underwater. One wrong move and the boat would suffer a lot of damage. As for a pontoon boat, I wouldn't even dare use it. I could see the breaks and seams were fish could be holding. We started working the pool and nothing was happening. I moved downstream working the tailouts and still nothing. I surprised with the sheer number of rocks in the water, that I didn't snag bottom. The only action was when Dave hooked into a large fish only to have his  leader break due to a large rock. Dave mentioned that yesterday, a local angler told him the fishing was better downstream. We heeded the advice and started to walk down to the cliffs. 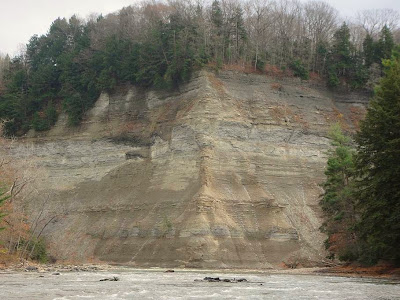 We made it down and I looked up, the cliffs were incredibly high and steep. Several trees were precariously hanging on the edge. The cliffs themselves were chiseled and scarred by thousands of years of rain and runoff. The entire section along the cliffs were a pinner's delight - a long slow moving pool that eventually tailed out about 200 yards down. But before we fished the cliffs, we worked a pool below a large set of rapids. I finally hit my first fish of the day as I watched the float popped twice and go under. I set the hook and felt the rod throb hard. The fish hit at the tail end and then I noticed the leader was wrapped around it. The fish started to drift into the rapids that spilled into another large pool. As the fish tried to fight, I had to hold the rod high to prevent the leader from fraying on the rocks. By then the fish had unwrapped itself and was trying head back into deeper water. I guided the fish between two large rocks and managed to beach it. It was nice large hen and her bottom caudal was worn - a sign of a repeat spawner. 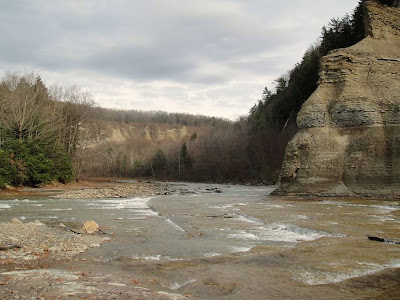 After that there wasn't a lot of action. Maybe there wasn't that many fish here. As we walked down, we could see two anglers fishing the lower end of the pool. Both were using spey rods. If there was a place to swing flies then they were in the right place. The river here wasn't that deep, maybe three feet deep, but it had a lot of places for fish to hold. We shuffled down stream, pulling off some Olympic distance drifts. But we had no takers and I was puzzled at the lack of action. The two people fishing told us they only caught one fish. It was a little after 12:00P.M and we had about a couple more hours before heading back. We tried another spot had promise - a long deep pool below the island. It was fairly deep over 6 feet deep, but nothing was biting. Due to high winds, there was a lot of leaves in the water and it made drifting at times difficult as the float would get lost in all of the litter. We had one more spot below the two branches of the river. We passed 3 other anglers and they had no luck either. We made it to the spot below the branches and it was a large shale ledge. The water here had a nice green tint and the low water above probably prevented any fish from making it over the series of stair cases. As with every other spot we didn't get a hit. I walked up to the south branch and it was barely flowing over the shale bedrock. It was almost 1:30 and we decided to call it a day.

The drive was brutal as I fought to stay awake. Only after filling up in Erie did the cold wind knock some sense into me and the steaming mug of coffee saved me from dozing off. Even though we didn't have the number of fish we hoped, I was very impressed with the Catt. It's a beautiful river and very challenging for either the pinner or fly fishermen. It's a long haul from Cleveland and if I was going to fish it again. I would purchase a reservation licence and spend a night at a hotel. If you have the time and money, I would add this place to your list.
Posted by Greg at 10:40 PM

Pics are amazing Greg. There was a time that I almost made the trek to fish the Rez. For me it was a crazy drive. LOL! A potential downpour halted my plans an I haven't thought about her since. She is a very nasty bitch to time and yes from what I have learned can go weeks upon weeks without being fishable. The Zoar Valley is certainly Gods Country and your trip was worth it for the experience alone. What an awesome place that would be to catch steelhead and get lost in ones thoughts. Good on ya for leaving the routine and mundane and rolling the dice.
Brian