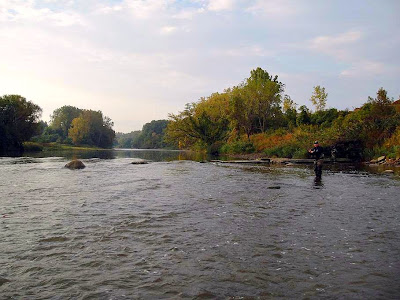 Yesterday ushered in the first day of autumn, but summer didn't want to relinquish its time here on the Alley. For many that was perfectly fine as the temperature was to be in the mid 70s. With the beautiful weather on Sunday that meant most anglers in the area were out on the lake fishing for perch or walleye. For the steelheaders, the diehards were scattered across the Alley. For many this would be the first trip out since last spring. Many were eager to get that first fish of the new season.

During the week we received more rain. Unfortunately the far east got nothing but a tinkle. As expected there the fish were parked in the lower reaches waiting impatiently as they've endured a barrage of spoons, flies and sacs over the past couple of weeks. Early season steelheading in Pennsylvania can be described in one word - clusterfuck. I've seen pictures of people surrounding one hole about the size of a kiddie pool with a dozen fish in it. The water is as clear as a fish bowl and all of the anglers are determined to get one of them to bite. I've often said that for punishment such as poaching or fishing without a license, that person should be forced to fish the Project Waters on the Walnut for the entire season.

For once it was nice not having to drive. I sat back and enjoyed a coffee as I was offered a breakfast burrito. Just what I need to go with a stomach full eggs and bacon. We arrived at first light and there were a couple of cars in the lot. In the coming weeks, the number of people will increase, but by then the all of the rivers will have fish and their will be plenty of room to spread out. 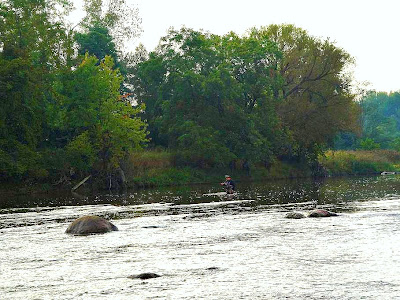 Last week, I got a couple jars of fresh coho eggs from the bait shop. Early in the season, I'm reluctant to use them. Deep inside my freezer, there were plenty of eggs from last fall. I have just enough to get through the fall when the bait shop gets a fresh shipment of salmon eggs. Last night I thawed a pack out dated 12/4/10, I took the sniff test and they didn't have any funky odor. I poured the eggs into a bowl and felt them. The eggs were firm and bright. Spending the extra money for a vacuum food sealer paid off.

We went back to the Grand and fished the same section. It started off like last week - uneventful. For the first couple of hours two skippers were caught at the head of the run in fast broken water. Boredom started to settle in and I felt the urge to move. I'm always the first to make a move. The old timers I was fishing were content to the beat the spot a little more. I walked upstream to the faster pocket water where I caught my first fish of the season last week. I couldn't find any takers, not even a chub. Dave and Bubba were fishing the tailout when I hear one of them yell out. I turned to see he had a large fish that was running wild. Bubba tried to get line out of the way. I watched a large bright fish explode from the water and it quickly broke the line. That's why early fall is so fun as the fish are fresh and the warmer water gives them energy to wreak havoc.

As the morning progress I my left foot starting to get wet and I sighed. Earlier in the week, I saturated the insides of my waders trying to see any dark spots that would reveal the source of my leaks. Unfortunately, isopropyl alcohol can only reveal so much. I hoped the patch job would slow the deluge to a trickle. Instead my foot got wetter and wetter and it started to make that annoying sloshing sound. I suspect there is a leak somewhere on the neoprene footie. Since the water was still in the 60s, it was nothing more than a slight annoyance. If it was December, most likely my foot would feel like a brick. If the fishing was great, I would of toughed it out 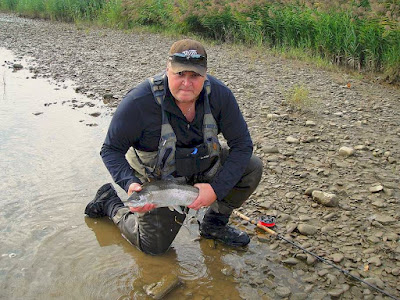 With the a soaked foot, I struggled to walk over the rocks as my boots spit out half of the cleats I put in the night before. I really regretted buying these boots as I curse as I stumble and roll over the rocks. I look like I'm slipping on ice and I try to maintain balance and composure. Once I finally get to spot, my legs are burning.

Last time out both me and Dave caught our first fish of the season. Bubba on the other hand posted a shutout. It was mid morning when Bubba finally shook the skunk off and I was left holding it. It was a nice fish unfortunately due to Bubba's massive girth the fish looked like a wee minnow as I took the money shot. For me it was a fruitless morning as I worked and reworked the spots trying to get a hit. It was one of those days we all experience - nothing goes right. The leaking waders, line issues and not getting any action. We got back to the truck, I pulled my waders off and you could hear the water splash out. My socks were completely soaked as were the bottoms of my fleece pants. Both of my feet were pasty white and terribly pruned.

It was in most part a slow day as one fish was caught here and there. With latest high water, we thought more would push in but as I said before you have to be in the right place at the right time. Tomorrow will another day painstakingly looking for those troublesome leaks. Hopefully next week I'll be tossing the skunk around somebody else's neck
Posted by Greg at 8:39 PM

Glad to hear another great day!