Winter Is Becoming a Drag........Well Maybe Not 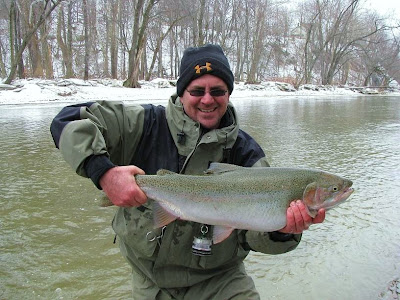 This winter has been a miserable one, the coldest and snowiest ever since I moved here 11 years ago. Over the years, I've lost some of my Canadian hardiness in regards to cold weather. Maybe I should go back home to Sudbury and sit out on Lake Wanapitei for a weekend of ice fishing to get my Canadian cred back. There have been times when I started bitching about temps being in the 20s this winter. But this is life in Northeastern Ohio as weather can be unpredictable. One day it will be 60F and two days later there's 2' of snow. I remember one April, I was fishing in a t-shirt as it was 70F and four days later I was completely covered in snow. Earlier in the week we received some rain and it raised the streams and muddy the waters. I was pissed that the Grand went up as I was hoping to do a float down it.

With the weather being a drag, so has work. I'm tired of sitting in the back getting drunk on coffee and having the office throw me a bone or two. The number of jobs this year has been few and far between. This past Friday, I spent the entire day in the garage shooting the shit with Bob the warehouse manager. We were detailing a work truck that involved wiping the dash and taking 30 minute coffee breaks, then washing the bed and taking another extended coffee break. We made it an all day event and I took all of KC's change in the cup holder for services rendered. The weather on Friday was not the best as the wind was terrible and the temperature barely got above 32F. If it was warmer, I would of came down with the 24 steelhead flu and blow the day off.

The day finally ended and I spent the evening going through the annoying task of tying sacs. I talked to several people on what would be the game plan and it was another trip out east. As expected I checked 3 different weather reports and got 3 different results. It would be the roll of the dice as I headed out early and was the designated guinea pig. I arrived to see the river slushy as expected and I made the best of it for the time being. I received the calls and told them "take your time". The morning was sunny and this late in the winter the sun is strong enough to burn off the slush in matter of hours...........wrong. The skies clouded over and the crew arrived to challenging conditions. Before the crew showed up I managed to land 5 fish, but the fishing was tough and I was concerned that the slush wouldn't burn off until afternoon. Sure enough the slush disappeared around noon and we started to hook into a lot of fish.

As I've mentioned before about Murphy's Law #6 ( catch a hog and you forgot your camera ) and that applied this afternoon as I hooked into a monster hen. As soon as the fish boiled at the surface, Don said it was a huge fish. Sure enough I caught a glimpse of it and it was the fattest looking pig I've ever seen. I managed to get it to the bank and she had a gut that would make King Kong Bundy proud. She wasn't long but she had a ton of eggs. One of Don's friends had a scale and she weighed in at 12lbs. Luckily, Don brought his camera and took a couple of money shots. Too bad Bubba left earlier because he could of cashed in his hen for this one as he was literally scrapping the bottom of his egg jar today.

Taking the day off tomorrow as another clipper is moving through and the temps won't make it out of the 20s. Many of the rivers are still off color, but the flow is great and there are many fresh fish to be had.
Posted by Greg at 6:39 PM

That fish looks like Norland after his year off after having a baby.
Friggin Hemaphrodites :0/