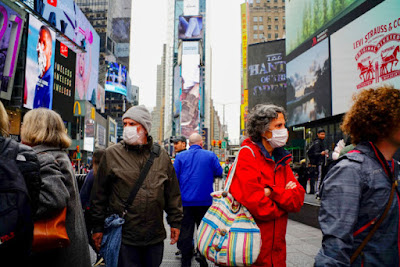 Life as we know it in America has changed and many of us have never witnessed something of this magnitude. I remember the day of 9/11 and seeing the World Trade centers collasping. But that was mild compared to this. Schools are closed, sporting venues suspended, entertainment venues cancelled, and travel overseas banned. Nearly every aspect of our lives has been affected as more and more restrictions are put in place to control the spread of the virus. Now I can't see a dentist, I can't get my haircut, and I can't go to the gym. Yesterday, the governor issued a stay at home order for every person. It's not martial law, but it means he wants every citizen to stay inside. You can go to the grocery store or go for a walk, but the governor's message is "flatten is the curve". From what I read on the internet, there's a movement dubbed "Stay the fuck home". I can find some humor in that because I'm an introvert. Other than going to work, fishing, or getting food, I consider myself to be a homebody. However, for those that lost their jobs, it's scary because they have no idea how long this is going to continue or if they'll have a job to return to.


Many Americans a month ago were mingling about and watching what was unfolding in Asia and Europe. But this world is so interconnected it was a matter of time that the virus made it in. Cases started popping up in Washington State and California. The President had his "hunches" about the virus and took the wait and see approach. As days went on, the numbers of cases started to rise and some medical experts used mathematical models to see how fast it would spread. Still the federal government dragged its feet, thinking it would be isolated cases. That ended up being the worse thing as the virus started to spread like a wildfire.

In my home state of Ohio, governor Mike DeWine leaned heavily on the advice of medical experts and the news was grim. More than 117,000 Ohioans could be carrying the virus and spreading amongst us. Not wanting the situation that was gripping Italy, DeWine was the first governor the close all schools. Then he expanded it bars, restaurants, and casinos. Anything to stop the spread and overwhelming the hospitals.

That in turn, caused panic as people started heading to the grocery stores in mass numbers. I went to the local store and looked at the aisle of empty shelves. Some people were shocked and others find some humor in it. There was no toilet paper, bread, cleaners, soap, and no hand santizers. Nearly all of the meats were gone except for the most expensive cuts. I grab frozen chicken wings and breasts. I grab the last packages of ground beef. I buy pasta and pasta sauce. Almost of the frozen foods were gone. I pick up some produce and try to get out as fast as I can. I make due with what I have and I'm confident that the grocery stores will implement a plan to curb the hoarding. What I find perplexing is why people insisting on hoarding toilet paper? I'm lucky to go through 8 rolls in a couple of months. Want to save on toilet paper? Here's a clue? Eat a lot of processed food and you'll be lucky to take a dump a couple times in a month. I should know as I grew up in the 70s and my mom feed us that crap well into the 80s.

Because of the closures across the country, many people especially those working in the hospitality, travel and service industries have lost their jobs. I work in the service industry and I've noticed a slowdown. Some customers have called suspending accounts and others have turned us away, fearful of infecting their employees. Hours have been cut back for those that are hourly. I'm salaried and I worry about my fellow employees who some of them live paycheck to paycheck. They fear of falling behind on rent or mortgages, the car payment, or putting food on the table. I have plenty of cash in savings to weather this event if it happens to go on for a couple months, which I think it will. But, I'm one of the lucky ones. Many Americans don't have a safety net. I can't imagine a person who's lost their job and has no savings. Do they qualify for unemployment? Will their job be there after this is all done? Nobody will know that answer. I work for a small family owned business and I'm sure every night the owner wonders if he can stay afloat if goes too long or if one of us gets the virus. Will it mean laying off some of the employees?  You can only cut hours for so long before people start balking. That's why it's critical the federal and state governments throw out a lifeline to help those small businesses get over the hump.

As expected when the governor issued the stay at home order, he had the list of essential businesses that could be open. I read it and it was so vague that any company could find a loophole and make them essential. My work is considered essential, but does a factory making granite countertops or cabinets think they're essential??

Every day I put myself at risk when I'm out in public. Because I have no idea if I'll have mild symptoms or I'll be hospitalized. But I excerise common sense and I use the "stay the fuck away from me" philosophy. Customers stay at least 6' away from me, I wear latex gloves, I keep conservations brief and I immediately leave after the job is done. If the customer is sick, I don't go in. They can piss and moan, but I tell them it's company policy. Personal hygiene is something I religiously adhere to. I probably wash my hands 10 times a day. I consider myself to be a healthy person and the last time I got the flu was back in 1988. According to CDC, the majority of people that get the virus will have mild to moderate symptoms. Those with underlying conditions are at risk, like my girlfriend's father who has stage 4 lung cancer and she cancelled her trip last week because she couldn't risk getting him infected.

The government has been asking citizens to socially distance themselves during this crisis. The less people interacting the less chances people get sick. Both me and my girlfriend have self isolated because her autoimmune disorder. Because I'm at greater risk of contracting the virus. I can't risk getting her infected. Her immune system is so sensitive that it could kill her. That's the most heart breaking thing about this situation because we have no idea how long this going to be. As for my family in Canada? I can't see them unless it's an emergency because the border has been shutdown. It could weeks or even months before the government is confident that we can go back to normal.

The only refuge I have are the rivers as it keeps my mind free of what's going on. Fishing relieves the stress and worry. A couple of us will meet up and during that time we crack jokes and bust each others chops. It feels like the pandemic never existed. Since I've been self isolating, I've been reading and writing short stories. I've used the time to reflect and journal about what's happening. Several times I've gone downtown and done some photography. If there's one thing that I haven't done is watch the news. If I constantly did, I would sink into deeper depression.

The worse is still to come as more and more cases show up. We're still functioning as a society albeit a cautious one. Hopefully once summer comes, this will slow down and give scientists time to develop a vaccine or better treatment of it. I think this will peak in late April or early May. Once this over, the country will never be the same again. Hopefully we'll become more empathetic and demand more transparency from our leaders. All I know is China is going to suffer and I've wondered if other countries are going to reconsidered doing business with them. They dropped the ball big time by not being transparent. But, I'm grateful we have a governor that has the guts to make tough decisions unlike the one in the White House who still has his head up his ass.
Posted by Greg at 9:06 AM No comments: