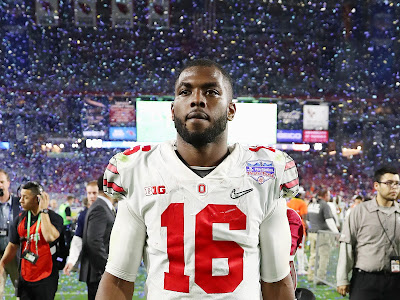 I recall reading a tribute to Kobe Bryant in the L.A. Times and a line by the author stuck with me (paraphrasing slightly) "Winners are complicated people. They don't often arrive to us agreeably or untethered to flaws. They anger us. Confound us. Infuriate our senses. They leave us gasping for good and bad reasons. But when the sun sets on their chance meetings with us, we can undeniably say this much about them. They were winners. Dammit, they were winners."

That commentary pretty well sums up J.T Barrett’s career at Ohio State. He was complicated, he had flaws, he confounded us, he angered us, and left us gasping whether it was bad or good. But at the end, he was a winner, whether we as Buckeye fans wanted to accept it or not.

For me, ever since after his freshmen season, I steadily grew dissatisfied with him. I felt he was the reason why Ohio State couldn't achieve their full potential. I lost count how many times I cursed under my breath whenever a pass sailed over a reciever's head, throwing for 3 yards, or standing in the pocket too long. I sit on the couch with a disgusted look on my face. Whenever they showed head coach Urban Meyer's face, I would yell

"How long is this shit going to last? Bench him!"

But Urban would never do it, no matter how loud we yelled, bitched or cursed about it. He was loyal to a fault and Buckeye nation was getting fed up.

Barrett was complicated. He's a humble quiet kid from Wichita Falls, Texas. Despite being that, he was a well respected leader in the locker room. His coaches and teammates loved him. He was a three time captain which has never happened in school history. However, he never had that same respect from the majority of fans who over the past two years started to sour on his performances on the field, especially in big games. Many felt he regressed as time went on.

On the field, he had flaws. He was a great read option quarterback and ran Urban Meyer's spread offense well. But when it wasn't not working, the offense struggled mightily. Barrett's weakness was his arm and it wasn't particularly strong or accurate. When the passing game wasn't there, the offense became very vanilla. I still believe to this day, had he not been injured during the Michigan game. Ohio State probably doesn't win the national championship, because Barrett couldn't stretch the field like Cardale Jones did.

Barrett with his broken ankle healing, watched Jones from the sidelines dismantle Wisconsin in the Big Ten Championship. They made it into the college football playoffs as the number 4 seed and were huge underdogs against number 1 Alabama. The Crimson Tide had no answers for Jones and his cannon for an arm as he brought them back from the brink of defeat and eventually won the Sugar Bowl. For the finale, the Buckeyes defeated the Oregon Ducks and won the National Championship. The 3rd string headcase that orchestrated one of the most remarkable playoff run in sports. He would be forever immortalized in Buckeye lore. Barrett would have to wait for the following season to get his shot at a title.

Sadly, that never came. In 2015, he lost his starting job to Jones. But, Jones struggled and eventually Barrett got his job back. All looked great until the team suffered a devastating last second loss to Michigan State, eliminating them from the playoffs. The following year, Ohio State made into the playoffs even though they didn't win their division. They go up against Clemson who are the number one ranked team. The Buckeyes are humiliated 31-0 and Barrett is the scape goat as the team fails to generate any offense. After the season is over, Barrett who has graduated is free to play anywhere. He announces that he's coming back for his 5th season. Some fans are not happy, many want a new quarterback as they felt Barrett wasn't the answer. Others are optimistic as head coach Urban Meyer has overhauled the coaching staff on the offensive side of the ball.

This past season was Barrett's last shot and it doesn't take long for the fans to turn on as they lose to Oklahoma in week two. He struggles to pass the ball and is inaccurate. Once again, fans want a change, but Urban Meyer continues to stick with him. What sends the rest of the fan base over the edge is the embarrassing loss to unranked Iowa. The week before, Barrett rallies the Buckeyes to a huge comeback win against Penn State. With 2 losses, the odds of them getting back into the playoffs is slim. They go undefeated for the rest of the season and win the Big Ten championship. The win is underwhelming as Barrett has an average game. The playoff committee announces their decision and Ohio State is not in the playoffs. In bitter twisted of irony, Alabama gets in, even though they didn't win their conference. The Buckeyes settle for the Cotton Bowl.

The Cotton Bowl was Barrett's swan song. Ohio State defeated USC on the strength of the defense. Barrett on the other hand struggled and many fans were just happy to see the last of him. Barrett was a good quarterback against lesser opponents, struggled against good defenses and was demolished against elite defenses. However, there's no denying Barrett's accomplishments. He holds virtually ever record at Ohio State and the Big Ten as a quarterback.


Amazing stats, but there's that sense of he never really accomplished any worthy other than winning a Big Ten title and a couple bowl games. When he came out and said he was going to come back last season, I knew Ohio State's chances at winning a national title were gone. Ever since offensive coordinator Tom Herman left, he regressed. That was even more so when Tim Beck was the quarterback and co-offensive coordinator. The fact was very clear that Barrett was one demensional. His lack of arm strength and accuracy, is what kept the Buckeyes from being that elite team. Unlike his opponent in the Cotton Bowl, USC's Sam Darnold who is projected to be the number 1 draft pick, Barrett will most likely go undrafted in the upcoming NFL draft. His performance especially in the 2nd half was so bad that I couldn't even stay awake to watch it. The next morning I read the box score and I wasn't surprised. He was a pedestrian 11 for 17 for 114 yards and was the leading rusher for 66 yards. He just did enough for his team to win which was the case most of the time.

That would the last memory for many Ohio State fans, the most winningest quarterback in school, who set all of the records, never delivered that title. He will be a lighting rod for debate whether he's one of the best players to wear a Buckeye uniform. But dammit he was a winner.
Posted by Greg at 10:51 AM No comments: