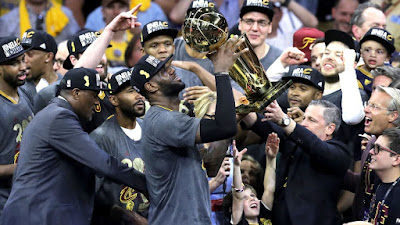 The long and painful list that many Cleveland fans hate to see. Oh and I almost forgot the two times the Indians failed to win the World Series. All of them were events that become a part of Cleveland sporting lore for all of the wrong reasons. Cleveland sports fans were the equivalent of Charlie Brown having the ball yanked out at the last second by Lucy Van Pelt. All of that came to end when the Cleveland Cavaliers finally broke the 52-year drought on Sunday night when they beat the Golden State Warriors in dramatic fashion.

What made this win so remarkable and memorable was the fact the Cavs were the first team in NBA history to come back being down 3 games to 1. I and many others thought the Cavs were dead after getting blown out in the first two games. None of the sporting pundits thought the Cavs had a chance. They were ready to write yet another eulogy to long-suffering Cleveland fans. Whether it was the Warrior's arrogance or the Cavs started to believe in themselves, the series started to shifted when Warrior's Draymond Green got suspended for punching the King's family jewels. Without their emotional leader, the Cavs won the game on the road and headed back to Cleveland where the city erupted as the Cavs forced a game 7 and the momentum was shifting.

But for some in Cleveland, that black cloud started to form over their heads. They've seen it too many times where victory is almost in their grasp and it was suddenly taken away. It was close all game long and late in the 4th quarter for many Cleveland fans it was too much. Neither team could score in a 4-minute span, it was like two heavyweight boxers trading shots, just waiting for that knockout punch. With 50 seconds left, Kyrie Irving delivered that punch by draining a 3 point shot and the Cavs took the lead. The Warriors couldn't score on their possession and the Cavs got the rebound. The Warriors had no choice but to foul them. LeBron James inbounds the ball to the backcourt and Kyrie Irving grabs it and races for the basket, with no shot he threw the ball back to James, to was ready to throw the hammer down. Green fouled him and James missed the dunk and fell to the ground hard. He writhed in pain as many thought he injured his wrist. It was nail biting time as James had to make two free throws. The first clanked off the rim and the Warriors fans loudly cheered. The city of Cleveland was on the edge as James was ready to throw his 2nd shot. That black cloud over some fans heads started to get a little blacker. James threw the ball and it rattled in, they were up by 4 points with 10 seconds left. The city was on the verge of exploding, but it wasn't over yet. All the Warriors need was a 3 pointer and a foul. But the Cavs pretty well gave them the space to shot it. Curry chucked the ball and it bounced off the rim and another Warriors player grabbed it and threw it in vain as the buzzer went off. ABC play by play commentator Mike Breen yells out

"It's over, it's over, Cleveland is a city of champions once again, the Cavaliers are NBA champions!!!"

For many in Northeast Ohio, this was the first taste of victory, nearly every Clevelander can tell you where they were when the Browns, Cavs, and Indians all failed to win. It was past down from generation to generation. This victory washes all of the negativity that plagued the area for decades as it was ridiculed and made fun of. Now all of those failures can be tucked away and forgotten as the city will celebrate this special victory.

LeBron James cemented his legacy as the prodigal son who once left and was scorned, came back with a promise to bring a championship back to the area where he grew up. Last year, he fell short as he carried the team on his shoulders when both Irving and Love were injured. He delivered with 3 amazing games and his game 7 performance will go down as one of the greatest.
We were all witnesses.