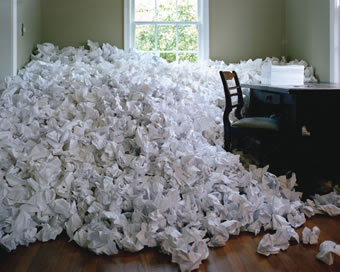 Once again, some steelheaders in Ohio are complaining about the state's steelhead program (imagine that). This usually happens whenever Ohio gets a bad run and the finger gets pointed at the ODNR. Ever since the switch was made from the London to the Manistee strain, most of the reaction has been positive, but there is a small camp of discontentment. After the dismal experiment of stocking Londons - which was a lousy strain to begin with. The state looked to Michigan and their Manistee strain. After much consideration, they felt the Manistee would give them most bang for the buck. Unlike the London, the Manistee was a spring run fish. As it was later determined, the Manistee had a better return rate and was well suited for Ohio streams. But that didn't stop the grousing as I hear the same complaints all the time and here are some of them

"Our spring run is too short"

"Whenever it rains, the streams blow out for weeks and most of the fish will be gone"

"Fishing Ohio in the fall sucks"

"Bring back the Londons"

"Why can't we stock both a fall and spring run fish?"

For some people they are valid questions. For me, I find them puzzling because there isn't a lack of fish. We live in the most productive steelhead fishery in the lower 48 states. Name me one place near a major metropolitan area of nearly 2.5 million people where you can catch close to 40 to 50 fish? Every year, over 2 million smolts are stocked into the Lake Erie's streams. Nearly everybody knows that Lake Erie steelhead don't imprint very well on their streams of stocking and they stray a lot. In one sample study done in the fall and spring in various New York Lake Erie streams, found that 75% of returning fish were from either Ohio and Pennsylvania. We get plenty of leftovers and then some.

The whining is generally done by people who are lucky to get out a couple times of the year or are deathly afraid of cold weather. If want fish in the fall, your going to have pull out the wallet and fork out the money for the far drive east. Ohio does get fish in early fall, but the eastern streams tend to be better. As for spring, Ohio is the place to be. The biggest complaint I here about the spring fishery is the run is too short. I find it odd, because I've caught Manistees in late winter all the way into late May. If my math is correct that's almost 4 months. Again, it's the guys that fish when the weather is in the upper 60s, gin clear water and fish stacked on the gravel that complain the most. It's like the old saying if you snooze, you lose.

I have news for the whiners, the Londons are never coming back and Pennsylvania won't give up their precious mutt quota. With state's budgets being slashed to the bone, we're lucky that the state spent the money upgrading the hatchery or even getting the eggs to begin with. We've been spoiled and I can have my brother-in-law in British Columbia tell you how tough it is just hook into two or three fish in one year.
Posted by Greg at 11:36 AM

Lol the run is to short! That’s because as you well know most people don’t like fishing in foul weather. If the water is too high and they can’t see the fish they feel they can’t fish. We have all seen this behavior out on the tributaries. Let the whiners wine! I like that people say our spring is to short. There are plenty of states out there that are fishable when ours is not. Go learn some new waters, and travel to another state. It took me three years to land a steelhead over 30” on large water in Michigan without a boat! I’m pretty sure they also think spring is to short due to the craptastic weather patterns we have. It would not hurt them to learn how to fish when the fish are not on their beds!

I also have to say comparing our insane pellet-head landing ratio to BC landing/hooking ratio is not the same. That to me would be like comparing mudpies to grandmas homemade apple pie lol just saying! Unlike most people I dont expect to catch fish when I go fishing.