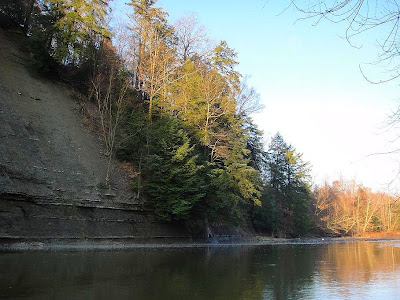 The Grand finally came down! I couldn't believe it and I had to pinch myself. The law of averages finally kicked in as we didn't get any rain. It took some time for her to come down and I was pumped at getting first crack at fish that hadn't seen a sac or fly in months. I was hoping that the river would fish for the next couple of weeks, as I had a lot of holes and pools to get reacquainted with. The other added bonus was I had my faithful G Loomis rod was back with a brand new upper section. Unfortunately, they didn't buy the snagged beaver broke my tip story and I had to cough up $40.00 for the repair.

This time of year I'm always debating whether to fish high or low. By now, the fish are usually spread out. The upper sections are more remote, scenic, and plenty of room to fish, but numbers can be sporadic. The low section is more urban, not as scenic and less room to fish. But, there are more fish staging waiting to move up. That's the dilemma I face every week - where to fish. But, since I prefer the peace and quiet, I'm more bias of fishing the upper sections of the river.The first outing was one of my rolling of the dice and it was fish high. The river was running 800cfs on the gauge - borderline wading conditions.

The weather was beautiful for February - blue sky and warm temperatures. But I knew
several spots that I could cross over without being tripped up and swept away. I've fished the river at this level in the pass it was either outstanding or absolutely dismal. That morning it was dismal as I had only two small hens to show for. Luckily it was still early and I baled for the rowdy lower sections of the Grand. As expected I rolled in and got the last spot in the lot. I walked down and looked up and down stream. Both pools were as expected occupied except for that tailout that everybody seems pass up. Last March, we hammered them in that spot all morning. I started crossing over and I was grateful for being tall as the water got up to my waist as I shuffled along the gravel bottom to the other side. Anglers on the bank watched me to see if I was going over my head. I started to head for the tailout and I noticed another angler starting to walk towards that tailout. My pace started to quicken and then I noticed the angler was elderly. He took his time slowly walking and waved to me as I near the spot. I greeted him and he asked if I could fish this spot. Of course I would never say no to a old person. He seemed harmless as he had a large surf rod and spinning reel and that huge plastic float with the metal pin in. It turned out we both spanked them pretty good and we exchanged fishing stories. I was amazed that he was 78 years old as he handled the cold and current pretty well. Since the tailout flowed on the opposite side, we had to fish it in the middle of the river. That made trying to land fish, especially large ones, very difficult as I don't carry a net. Once the bite shut off, I got the case of happy feet and I bid farewell and wished him luck. Downstream, the morning shift left and I managed to pick off 6 more fish before calling it a day, getting home in time to prepare dinner for the Superbowl.

During that week the Grand slowly kept going down but the biggest concern was a blast of cold arctic air was coming to town for the weekend. The nighttime temps started to dip into the teens and low 20s and for Saturday a ton of snow was coming. Sure enough I woke up Saturday morning to hear the wind howling and I looked out the window to see a whitewall of snow. Even for this diehard a good day in bed was better than fishing. Later in the morning to my disbelief I get a call from Bubba that he's on the Grand. At first I though he was bullshitting me. He braved the elements and despite the frigid wind, slush and snow he managed to get into fish albeit a very short outing. I gave a thumbs up for his spirit and quickly pulled the sheets over my head.

The next morning I slept in as I was in no rush to head out. I leisurely made breakfast, sat down and watched Sportscenter and had a cup of coffee. I knew a lot of anglers took this weekend off and had a lot of excuses not to go. I hit the road at a unheard of 10:45A.M and drove out to the upper Grand. I figured slush might be a problem but it wouldn't be as bad downstream because of the dam above. I pulled in around 11:30A.M and there wasn't a car in sight - nice. It was cold probably in the 20s but the wind made it feel like it was in the single digits. There was always the threat of lake effect snow as the wind was coming from the west. As for the river you couldn't ask for perfect conditions. The Grand ole gal was running with no slush, the water was slightly stained, flow was perfect and wadeable. But there was some side ice.

The plan was to fish the first mile as there was plenty of pools and holes. The clouds were low and steel grey and the wind gusting from the west. I could see rocks and shale ledges that are usually hidden when the Grand is higher. Unlike the last outing, the Grand was running much lower. The rock that I use as a gauge for wading was 3/4 out of the water. The lower flow made fishing easier as the river ran in different directions and it was easier to fish the seams and cuts. The first fish of the morning was a small hen near a tailout. I started to shuffle downstream and it was a treat not worrying about falling into a unseen hole. I had another fish on near a tailout and I had muscle it out under from the ice shelf. It wasn't big - a small male. I kept working down to the section that I generally fish first when the river is higher. I could make out rocks and reading the water was a piece of cake as I watched the current and bubbles slow down near sections that shallowed out. That's where another fish was lying as I set the hook and it was a large male in full winter colors. 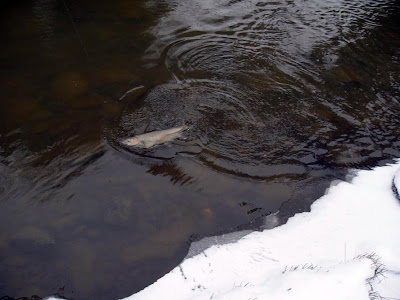 I walked down to section that we call the "shuffle alley" as we often shuffle our way down the cliffs. It was still slow as I had no hits and I had to battle ice on the guides and line. I made it down to the last spot that I going to fish before heading back. I checked the time 1:45P.M, no time to head down low. The phone rang and it was Bubba who decided to sit this one out and was curious to see how I was doing. I gave the dismal news - 3 fish and I was getting cold. I gave out all of the details - river looked great, flow great, but the fish were not in playful mood.

It was 15 minutes after I talked to him and it was like the switch went off. I adjusted the shots and started drifting more towards the slack water that flowed towards the hard bend and spilled into a series of rapids. The float when under and I felt the rod throb. I watched a very large hen come to the surface. She was big and fat enough that I kept her eggs. I whipped out the stringer and cut her gills to bleed her out as I only had a couple of hours left to fish. Back home I was down to 12 packs of uncured salmon eggs and 3 lbs of cured eggs. I left the fish to bleed out and I walked up to another spot. It turned out to be where the fish were hiding and in less than an hour I caught 6 fish from that spot.

Before heading back I cut the hen open and inside her eggs were ripe. The skein was loose as this fish was close to spawning. I suspect that we'll have a early run as we've had very mild winter with sufficient amounts of rain and snowmelt. The water temperature is close to the optimal spawning conditions and we're almost to the month of March.
Posted by Greg at 7:22 PM

Right-on Greg! Nice photo's and recap. Seems this winter has been treating us all reasonably good. Can never complain about a Feburary outing opportunity.
I think you are right about the early spawn. The next few weeks should be silly...