A day for the diehards as I woke to hear the wind howling and rain pelting the window. I didn't get to bed until 3:00A.M as I called my parents and sister out west and reminisced about the past year. My mother was crying at the fact that I wasn't able to make out for Christmas. Unfortunately my divorce left me in shambles both mentally and financially. Its not fun spending Christmas alone in an apartment without any evidence of Christmas joy.

Its been a tradition for the past several years that I go fishing Christmas morning usually down to the Rock as it's a stone's throw from my place. Usually, I'll meet a couple of the guys for a morning of fishing. But since the weather was so shitty and the typical low and clear conditions of the other rivers. I went to the Grand and I was no hurry. Half way to the river, I had second thoughts as I was gripping the wheel with two hands as the wind slammed me all over the freeway. With rain and snow melt, I had a feeling that most of the rivers would eventually blow out for the weekend.

The river was primed and it was a shame that it would go to muck tomorrow. The wind was a real mother today as the howled downstream. Gusting winds and Siglon line = missed takes. The fish wanted to play and I had a hard time not getting blown into the drink as I stood a rock. I did land a monster male that could of surpassed the pig I caught last month. The majority of fish were darker with some chromers thrown in.

No photos as that fat bastard didn't give me a camera.
Posted by Greg at 7:00 PM 2 comments: 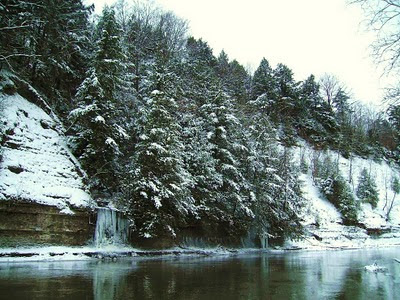 Just five days until Christmas I finished all of my shopping and of course I missed a banner day on the river yesterday. Today, I froze my sacs off and the fish were being a bunch of grinches. Should of shopped on the net!