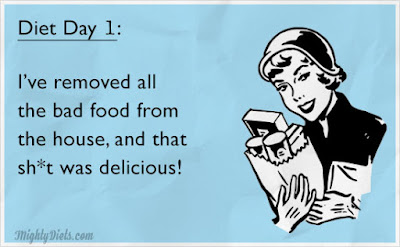 Last month I went for my physical and specifically for my cholesterol. Two years ago was the first time I ever had it tested. That's when my father passed away and his health most of his life was a mess. Even though he was a phys ed teacher, he was a two pack a day smoker, meat and potatoes, and the only exercise he did was when he played golf. During the winter he was a permanent fixture either on the couch or in front of his computer. Heart disease runs my family and I'm at the age now where I have to watch it. When I got the results, my cholesterol was elevated, but nothing to freak out about.

The doctor told me to eat healthy and exercise. The exercise was the easiest part. Eating healthy? I have an insatiable appetite rivaling that of a famished Tasmanian devil. I tried to eat healthy, but I often resorted to hitting the hot buffet at the local grocery store. After a day of fishing, I would hit McDonalds and get a couple small cheeseburgers. I never like to cook, because I was either too tired after work or I would rather fish. I made good money, so I could afford to eat out and I did, a lot. Sometimes it was healthy and other times, not so healthy. It was maddening as I was stuck at 200 pounds and my gut wasn't getting flat. But, that was on me as I didn't have the willpower.

A couple of weeks later and the results are in - my bad cholesterol is still elevated. I wasn't surprised, but I was when the doctor prescribed me Lipitor. Bad enough I'm taking Flomax because my prostate is ballooning and I got tired of peeing on the hour. I messaged the doctor and told her I would rather do the lifestyle changes before taking a drug. She agreed and I set an appointment in November to see if those changes helped.

This is the biggest change I will make. I made a huge one 25 years ago when I gave up smoking. This time I'll have to give up

"Oh one burger and fries won't kill me"

But the cheating happened more and more. I would come back to the office straving and I would see the box of pizza sitting on the back table and I would snatch one or two pieces. It started to add up and that's the reason why my weight got stuck and my cholesterol was still elevated. Something had to give, because I didn't want to be on statins for the rest of my life.

My fridge today would repulse the old me from 20 years ago. It's full of fruit and veggies, chia pudding, coconut milk, avocados, range free eggs, and organic chicken breasts. In the pantry are almonds, steel cut oatmeal, and almond flour. I'll have to resist the temptation when one of the guys at work brings back a pizza or the one girls up front brings in cupcakes. I'll have to grin and bear it or just run out of the office after work.

So far this week, I've been packing lunch. It's a chicken salad with peppers and avocados, chia pudding and blueberries, and a couple apples. It will be interesting this upcoming season when I go fishing with the guys because their eating habits are atrocious. It's McDonald's or those raunchy Speedway burritos. I would starve if I didn't pack a lunch.

I will have to be very, very disciplined. It's so easy to fall off the wagon. The devil on my shoulder will be flicked off when I looking at the menu. Put a large sundae in front of me? I won't flinch, I'll just push away. No breaking into a cold sweat. If there's no one about me, once I go all in, I'm committed 100%

All I know is I'm going to lose weight, guaranteed. Oh but I forgot, I have to make an appointment for a colonoscopy. Isn't it fun turning 50!!
Posted by Greg at 9:30 PM No comments: