Will It Be The Lion or The Lamb? 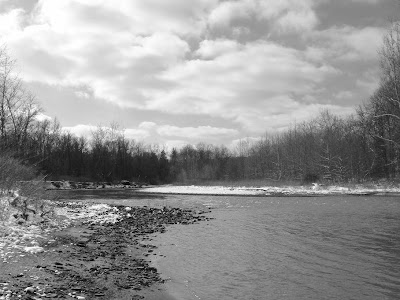 I remember as a kid hearing the old saying about the month of March. It comes in like a lion and goes out like a lamb. Growing up Northern Ontario, the lion had the entire month to itself and at times well into April. As for the lamb, it never stood a chance. Since I’ve been in Ohio, March can be bi polar as it can usher in spring quickly or a week later dump over 2’ of snow courtesy of Lake Erie.

The Alley this year has barely experienced winter. Snow was far and few between. Unlike past years, where I trudged through the deep snow to get to various spots out east in the snow belt. I huffed and puffed as my boots, waders and jacket made negotiating over downed trees and logs a herculean event. This season, it was a leisurely stroll through the woods and I barely broke a sweat.

Once again the pontoon boats were left in the garage as the Grand went back up after another round of rain came by - just in time for the weekend. I was  beginning to wonder if we'll ever be able to float down the Grand ole gal. I watched the gauges climb for all of the rivers and several peaked early Friday. The two that looked like they might fish for Sunday were the Rocky and Chagrin. Both started dropping fast as we had colder weather move in. Whenever the rivers drop fast, the sediment load often lags behind for a couple days. Late Saturday afternoon, I drove by the Rock and it was extremely dirty. The Chagrin was also coming down quickly and I wondered what it would be like. 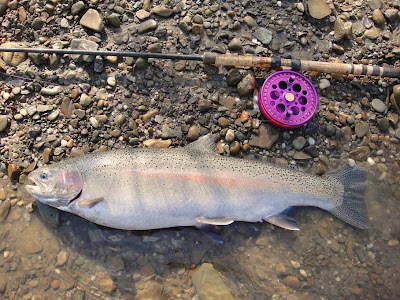 After much debate, I decided to go back to the Chagrin. I wasn't in a hurry to get to there. During the drive out, I thought about how many more weeks of fishing do we have. Due to the milder winter and high water, I wondered how many fish would be ready to spawn? Over the past couple of weeks, I've caught numerous hens that were spawned out. I was pretty sure that most of Ohio's fish were still trickling in and in the weeks to come more would make the push up. But when will that push stop? Who knows and we haven't hit spring yet and that's considered the wettest time of the year. Last spring, we set the record for the most amount of rain. The month of April we received nearly 5" and once the waters receded, the number of fish was dismal. The spring run ended with a whimper and once again the debate started about Ohio stocking a fall run strain.

The day before we received snow and colder temperatures and I was hoping for some sun. For Sunday, the weather honks were calling for sunny conditions, but when I left in the morning the sky was low and gray. The cloud cover was so thick I was wondering if the sun would ever have a chance to come out. It was barely above freezing as I started walking towards the river. The water was stained, but not terribly dirty, it was perfect conditions for running sacs. I fished the same stretch of river and the plan was to fish the prime spots.

I pulled in the lot and I was the first car there. I guess a lot of people thought the rivers were too high. A lot of people here still insist the best time to fish is when the water is green. I don’t have the luxury to wait for “optimal” conditions. Unless the rivers are a roaring torrent, I’ll fish whether the water is 6” visibility or the color of Gordon’s gin. I hit the first spot off the trial, a small run that eventually flattens out. It felt like a hot pink morning and I had plenty of those sacs in the jars. I casted out the float right off the seam near a drop off and the float tapped and went under. The first fish of the morning was a small spawned out hen. It was most likely a refugee from Pennsylvania. It was the only fish out that spot and I wasn’t in the mood for hole beating, so it was off to the next spot. 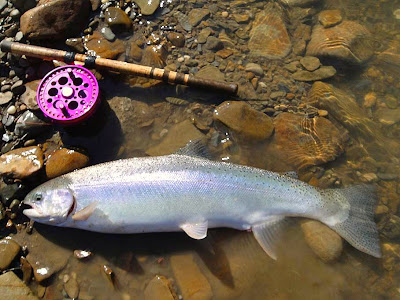 The fishing was dull as I worked the pools and nothing seemed to worked. I tried a variety of colors and I had no takers. I constantly looked to the sky hoping that the sun would make its appearance. Eventually, it peeked out and the clouds started to part. I felt the warmth of the sun's rays and hoped they would penetrate into the murky depths and get the fish into a playful mood. It seem to work as the fishing got better as the morning progressed. The same spot that coughed up a monster hen last week, turned out to the spot where another big fish lied waiting. This was a classic winter lie as the pool ran along a rock wall that was placed by the landowner to help prevent bank erosion. Over time the current cut out a nice hole and it gradually tailed out at the next set of riffles The fish hit right near the tailout and it was another large hen in her winter colors sporting a big gut. It was getting close to noon and my stomach started grumbling trying to get me to the Jeep. But I had one spot to fish. I quickly got into a couple of fish in one run that is the last spot before heading back to the lot.

A couple years ago, I had list of the types of people that annoy you when fishing and I forgot to add this one - the clueless steelheader. I was fishing that run right next to the trial that takes you back to the parking lot. I see a guy walking down the trail. I assumed he would figured out I was the only person since I didn’t see anybody all morning. Plus, he would seen that I was fishing the first spot off the trail and he would of thought I just got here. Most people, including myself, would walk by, exchange greetings, and kept on walking. After all it wasn't a long pool and it was a small run. So what does he do? He decides to fish above me. I was stunned and somewhat annoyed. I looked at him and he asked "how's the fishing?" I gave my standard response "nothing", hoping he would start walking, but he didn't take the bait. Then I decided to have fun with him and said "there's plenty of water upstream". I guess he didn't like my helpful comment and he sneered "This is a productive run for me and I catch a lot fish here", translation - I'm too lazy and stupid to find new water. I'm beginning to wonder if some of these guys have a micro chip embedded in them that prevents them from walking 50' from the trial. I just made that “you’re an asshole” smirk. If there's credit due, he respected my space. I caught a couple more fish and I was wasting valuable time as I had more spots to hit. I had no time to play the dick and mess with him. 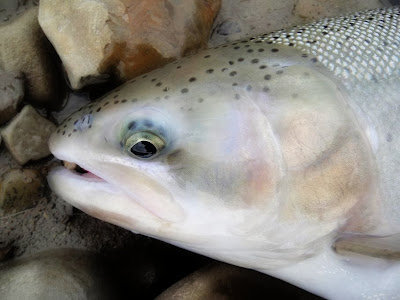 I made a quick pit stop and wolf down a couple of cheese burgers. That's the nice thing about the Chagrin, it's a 10 minute drive from any fast food joint to river. I drove downstream to another spot that I love. As I drove there was about 10 cars parked along the road. That seemed like a lot of cars for a couple of spots, but it turned out to be bunch guys playing flag football. The field was a mess as the most of the snow was melted. But these guys were hardcore and the lousy conditions didn’t faze them. I walked down to the river and from the bank I could see 3 guys milling about. I crossed over and it seemed they weren’t familiar with the river. All of them stood in front of killer hole but all of them had fly rods. It was a tricky spot to fly fish because the fish generally held on the opposite side. The current ran all over a series of rocks and mending the line would have been a chore, plus there was a ton of snags at the bottom. They looked at me and started to head downstream. I knew exactly where the fish were holding.

I made a cast out into a seam that ran along a downed tree. From past experience, I knew there was a large rock about 10’ off the last 20’ of the tree. That’s where the fish love to park themselves. I positioned the float about 5’ off the tree and started to trot downstream. The float made its way down to the tail out and right near the rock. The float shot under and I felt the rod start to throb. This fish fought a lot harder than the other I caught this morning. The 3 gyus downstream looked up and one them pointed that I had a fish on. The fish hugged the bottom with a stubborn tenacity. As I got it closer to the shore, I caught a glimspe of the fish and it was as bright as a silver dollar from the mint. It was a  sign that the spring is around the corner because it was a Manistee. When I beached her, she shimmered in the sun, not a blemish on her body. But, it turned out to be the only fish from that spot and I really wanted to head further up river, far beyond the dam into the land of unknown.

Last spring and summer, I scouted the upper Chagrin and found it chock full of gravel, small pools full of lumber and deep holes on the bends. The river above the now defunct Gates Mills dam runs through some the wealthiest communities in the Cleveland area - Chagrin Falls, Moreland Hills, Hunting Valley and Bentleyville. Luckily nearly all of it runs through the metro parks. Because if it wasn't there would thousands of posted signs everywhere. I pulled into one of the many lots found in the south Chagrin reservation. The section I was fishing was loaded with lumber and resembled the steelhead ditches of Indiana. I hooked into a nice fish only to see it tear off line and bolt for the nearest downed tree. The end result was the tippet got shredded and that was the only the action I had. I hit a couple of spots and nothing was happening, it was almost 4:00P.M so that was the perfect excuse to head home.

When I got home, I looked at the calendar when I placed the keys on the rack. There was about 7 weeks and we're almost at the end of April. With this mild winter and longer days, its only a matter of time before the fish in the rivers start spawning. I wouldn't be surprised that some fish are spawning as I'm writing this. How many fish are staging in the lake? So many questions and I hope the weather stays a little colder and cross my fingers that the Grand will fish for next week. Might have to start cashing in those unused sick days from last year.