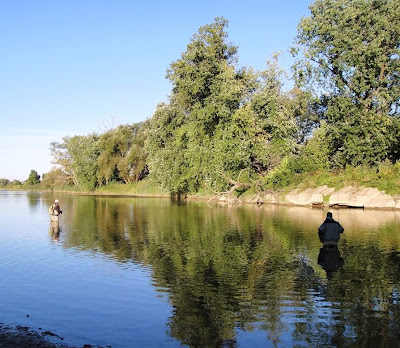 Cool weather over the past week has stirred many diehard steelheaders out of hibernation. Old friends are starting to call one another for the latest happenings and any shred of information. Over the past week, I've started stocking missing floats, hooks, and sinkers. Replaced the line, cleaned the reel, and inspected the boots for missing cleats. For this diehard, the past spring was a distant memory albeit a bad one. I was so disappointed with the spring run that I stopped fishing in the middle of April. Many were hoping that this season would be much better than the previous one.

During the past week, we had scattered storms come off the lake and from the south. The end result was some streams rose and others were bone dry. The streams way out east didn't receive any so that crossed off several from the list. Several streams close by were running slightly lower but I didn't want to deal with elbows and assholes. We decided to head to one our favorite river and turned out to be a great decision.

The alarm buzzed acting like a starter's gun, telling me the marathon has begun. It was still dark out as I stumbled down to the hallway to the kitchen. Filling the coffee pot and cooking bacon and eggs in the frying pan. I thought about last season and how terrible it was. A couple weeks ago me and several friends talked about what the upcoming season would be like. Some thought it would be a repeat as these types of things usually don't turn around in one year and others hoped it was a fluke. Me being the eternal optimist, hoped the fish would return in bigger numbers. Walking out the door, I was greeted with the crisp, cool air and I could see the faint light on the horizon. I checked the tote box to make sure that I had everything. The forecast for the day was calling for sunny skies and summer like 72F. I arrived at the river at first light as a couple of friends pulled in. The last time we fished here was in late March and we crushed them that day.

We walked down the trail and could see the river was low, but had a good flow and color. Upstream we could see 4 anglers fishing one popular spot. The day before I picked up some fresh salmon skein and tied some sacs. In the other jar was sacs I froze in April. In the past, I've had issues with old sacs that spent the entire summer hidden deep in the freezer under massive piles of chicken, pork chops and steaks. I thawed them out and they looked and smelled all right, but then again I'm not a steelhead.

With it being so early in the season, we knew the number of fish would be low. In Ohio, the number of fish tend to be in the low numbers, as some of them start to trickle into the lower reaches of the rivers. It's usually the most experienced and dedicated steelheaders that find them. The water still felt warm to the touch and September is a month where you have to be at the right place at the right time. We started off at the long pool, working in tandem looking for that certain holding spot. Another angler was fishing and told us nothing was caught and didn't see or hear any fish rolling. I still find it odd fishing for steelhead when the trees are green with leaves and reeds tall.

The first fish of the year was Dave's - a typical Steelhead Alley steelhead about 24" and 4 pounds. He was the first to get the skunk off and we had our work cut out for us. We gradually shuffled down the pool hoping for that tell tale hit of a steelhead. But there was none and we walked downstream to fish a large deep sweeping pool that is usually better when the water is colder and lower. But in early fall it provides the wary steelhead the shelter and safety they seek when conditions are bright. But turned out to a productive spot for catfish as another angler farther down was drifting sacs along some downed trees. We chuckled as we thought he might be drifting chicken liver flavor sacs but both fish were fairly fat and full of spunk. 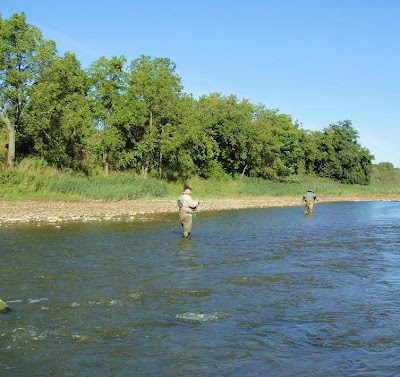 I was still wearing the skunk and to make matters worse, both of my feet were starting to get wet because of leaks in my waders. I had all summer to make repairs and I kept procrastinating. I have come to terms that no matter what brand of waders I have, I'll eventually spring leaks. With the water being warm, it was bearable but there is no way I'll stand for that in the frigid months to come. So wader repair is a top priority this week.

The same spot farther up that we fished in the morning, still failed to produce me the first elusive fish of the new season. I had to start thinking like a fish. Where would I be when the water is warm and low and the skies bright? The first thing that popped in my head was pocket water. There were a series of cuts and pocket water that rushed around several large rocks. I took a sac that contained fresh salmon skein and drifted along one seam and the float shot under and I felt that tell tale throbbing and explosive run of a steelhead. The fished charged out into the middle of the river and raced up and down. Being mindfully that warmer water can stress fish, I quickly brought it in. It was bright and shiny as a newly minted coin. The skunk was off my neck and I took a quick shot and released it. The same spot produced two more fish, both were juveniles as one leaped from the water and fought like a 10 pounder. The other was a little more than 12" and it's hard to believe that 6 months ago it was a 8" smolt. In that span the fish almost doubled in size and is testament of the productive waters of Lake Erie.

It was late morning when we returned downstream to the same spot and the 2 anglers that fished with had caught 6 fish, most of them skippers. By then it the sun was high in the sky and the fish had shut down. I couldn't complain as it only September 18th and better days are ahead.