Fly or Pin for Steelhead? 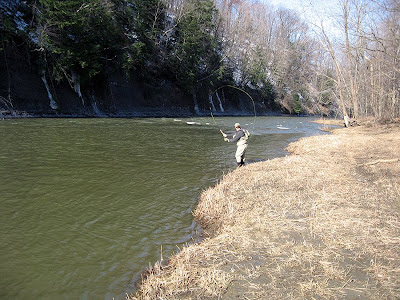 Just as Steelhead Alley's streams were coming down to fishable levels, the latest round of the March monsoons returned. Personally, I'm sick of this shit - rain, snow, melting snow, more rain, more snow and more melting snow. Before you could say fish on, the streams blew out. The last thing I wanted to do was go ditch fishing and I crossed my fingers for one stream. I began to speed dial and called a couple of friends to see what it like out east. Either hell or high water, I was going fishing. I got the call and the verdict was - let's go fish.

Today was the day I picked up my slightly used fly rod - 11'3" Redington rod and 6wt Teton reel. Since turning to the darkside, I rarely use a fly rod. At home my two Redington RS2 reels make great paperweights and the St Croix rod is somewhere under a pile of old carpet and boxes in the garage. Over the years, I wanted to get back into fly fishing as I wanted to relearn the finer details of it.


I meet up with my friend and got the rod and reel. I gave him the money and with him going to Mexico next week, I'm sure the money would buy a lot of Corona or Pepto-Bismol. The river was slightly stained and the water was a chilly 38F, but that didn't stop some fish from hitting the gravel. I put the fly rod together and took it for spin. The 11'3" rod handled nice and high stick nymphing and roll casting was a breeze. I fished some pocket water using sucker spawn and clown eggs. But I didn't get any hit and returned to the pin. The morning was very slow as I had a skunk hanging around my neck. We decided to head downstream and look for some players. The river was busy as everything else was still too high and muddy. We really didn't fish that much and we spent more time bullshitting with other anglers. We continued downstream and nearly every section of the river was occupied. We finally meet up with another friend and it was now almost noon. After five hours of fishing, I didn't even sniff a fish.

We drove back to the same spot we fished this morning and both of them left. Since I drove almost 80 miles, I wanted to get my money's worth and there was still plenty of time to break the o-fer streak. By now it was 1:00P.M and the morning crowd left and I was alone. I figured the fish on the gravel got pounded and moved into deeper water. It turned out to be the right call as I started to hook into fish. The majority of fish were chrome and several hens had not released their eggs. The highlight of the afternoon was when I got freight trained by one fish. The float got whacked and I set the hook, the fish turned and burned downstream. I burned my fingers on the centerpin's spool as I tried to put the brakes on it. The fish made it down to the end of the pool and I was eager to see how big it was. Usually large fish will bolt hard, but I've had 3 pounders feel like a 12 pounder. BUT, that didn't happen as the only glimpse I got was the fish giving me the middle finger ie hook being spit out of the water. I muttered and thought that I put too much pressure to stop the fish.........bastard

Over all it turned out to be a great afternoon and as I left, the second shift were making their way down to the river. On the way home, I could see the Grand was still a mess and the Chagrin was coming down, but still dirty. For the week ahead, there is another dose of rain coming either Monday evening or Tuesday.
Posted by Greg at 8:07 PM No comments: