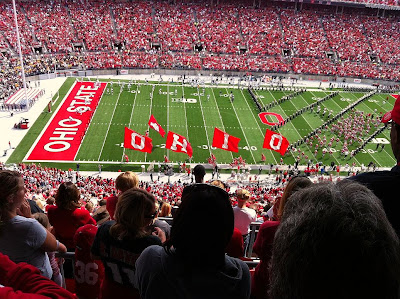 September 15th was a date that was circled on my calender. It was the Ohio State vs California game in Columbus. This was going to be my first live college football game. I've always been a big fan of the college game and preferred it over the NFL. The student athletes play with more passion, the traditions, the game is more pure, and the atmosphere is electrifying.

This is the first season under the tutelage of new head coach Urban Meyer - the 2 time national champion at Florida. This is a home coming for Meyer as he's a native of Ashtabula, Ohio and started his coaching career at Ohio State. He replaced Jim Tressel after he resigned during the tattoo scandal that eventually cost the Buckeyes all of their 2010 wins and Sugar Bowl victory and their first losing season since 1988. I was never a big fan of "Tressel Ball", so I wasn't terribly sad to see him go. This year, they're banned from a bowl game and many consider this a rebuilding season. Meyer is considered one of the best recruiters and he has secured some of the best talent in the nation so the future looks bright for Buckeye Nation. 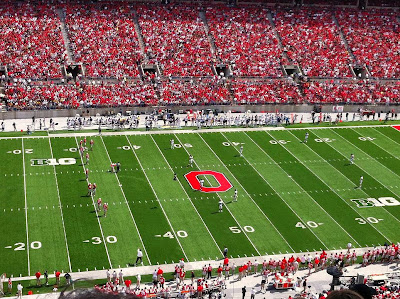 We left Rocky River early Saturday morning and it was a beautiful warm day for a game. We headed south on I-71 to Columbus and on the drive down we could see many Buckeyes fans dressed in scarlet and gray. We exit the freeway and it was a wall of traffic. As we walked to the stadium, we could see groups of people tail gating and off in the distance we could hear a live band playing. Everybody was in a festive mood, people tossing a ball, playing corn hole, pounding back beers and grilling food. In the distance, I could see the fabled horsehoe. The Shoe is considered one of the best stadiums to watch a college game and it's steep in history. We were in a sea of scarlet and gray as hundreds of fans of all ages walked through the tunnel hooting and hollering towards the rotunda. Mixed with some of the chants were the famous "Fuck Michigan". 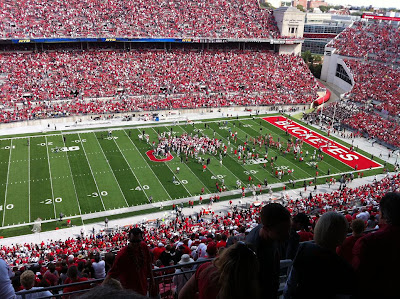 Our seats were in the D level under the press box. After a long climb up to the section, we settled in as the Ohio State marching band came out getting ready to perform the Buckeye Battle Cry. The seats were great as we were on the 35 yard line. As they assembled on the field, the crowd was getting worked up. Then the drum major ran out to the middle of the field got the band started. Over 100,000 people started singing the Battle Cry and it was amazing. That's what makes college football so special, the tradition unique to a particular school and Ohio State's is their marching band and its fans. They put on a spectacular show of precision as they performed "Script Ohio". After the national anthem, Cal entered the stadium to a chorus of boos and when the Buckeyes came running out, the place erupted. 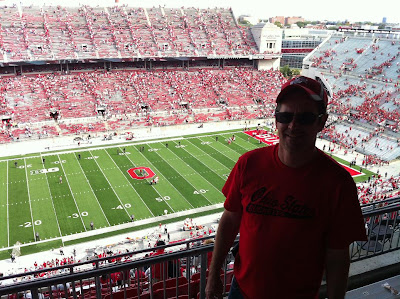 The Buckeyes raced out to take the lead but as the game progressed Cal started chipping away and eventually took the lead. The Buckeyes struggled in the 3rd and 4th quarters. With minutes left in the 4th quarter, quarterback Braxton Miller tossed a perfect ball to wide open Devin Smith and ran it 70 yards to secure the win. It was an ugly one as they gave up over 500 yards of total offence. This year they might win 10 games but it will be seen whether they can hang with the big boys of the Big Ten - Nebraska, Michigan State, Wisconsin and the hated Michigan Wolverines. But a win is a win in my book.

We hung around after the game and watched the band perform several songs before playing the battle cry one more time as they marched their way out through the tunnel. After the game we wandered along the street and many of the bars were packed with fans looking to celebrate and quench their thirst. We drove to High Street and my urbanspoon app picked out a bargain gem a place called the Press Grille. It was a little quaint cozy restaurant filled with students and young professionals. The food and beer was delicious and I soaked in all of the experience and I'll never forget it. We made the long drive home and I'm grateful that my fishing partner Bubba - a former player was gracious enough to give us tickets. It's an experience that any college football fan should do and it was one of those things on my bucket list. I'm looking forward to attending another one in the near future.
Posted by Greg at 10:21 PM