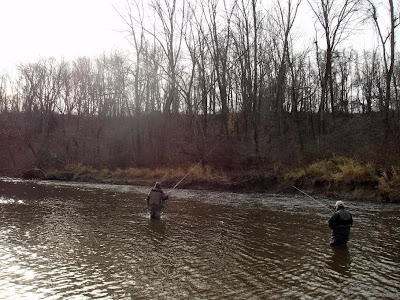 All of Steelhead Alley's streams are generally the same. All of them run over shale bedrock, have mud banks, gravel beds, have little to no groundwater sources, and most of them with the exception of the Grand become fishable within 3 to 4 days after rain. But, that's where the similarities stop. One river might get a monster run and others might get a wee one. That's the result of Lake Erie's steelhead not imprinting well enough on their river of stocking. The smolts are lucky to spend several weeks before being unceremoniously flushed into the lake after a high water event. As a rule of thumb, I generally fish farther east and as the season progresses, I start to make my way back west. Even though, I live in the western Cleveland suburb of Rocky River, I prefer the eastern rivers because they're scenic, more rural and tend to get more PA steelhead. 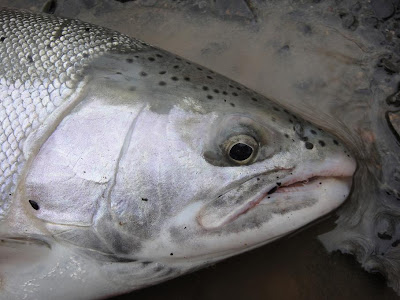 Friday, I fished solo as I decided to take a well deserved day off. Work has been slowing down and this is the time of the year when I start cashing in personal days. The plan was to fish far out east as I was scouting for others for the upcoming weekend. Arriving at first light, there were two cars and every time I've been there, I know where the people are going. Then another car with Ontario plates pulled in across the road and it was packed with guys. Lately, I've seen a lot of Canadians on the Alley and I hoped they didn't had a clue on where to go. But, I noticed a person jumping out of the car, fully dressed in gear walking briskly to the river. When I got down to the river, as expected he locked up the spot for them. Maybe he was a guide or something, but who cares, because I knew of spot that probably would fish better.

The river was slightly stained and had a nice flow. It was cold with temperatures in the 30s and that meant working the tailouts. I could see everybody at the spot downstream. I have a photogenic memory and I know the lower end of the river very well. I knew there was a shale ledge towards the tailout right below a willow tree hanging the over the spot. I started yanking fish out of that spot in no time. During my time at that spot, I would look downstream and see the group of anglers not doing a lot. Sooner or later they would start getting antsy and start heading up or down. I was hoping to they would head down. Then  one by one they started to come up. I tried to be coy as we exchanged greetings. I resumed fishing and looked over my shoulder and watched them walk up and around the corner. I continued to bang fish and eventually I cleaned the spot. The bottom of the pool was littered with a lot of sore jaws, so it was off to another spot. This section was a long sweeping pool. There were plenty of fish from top to bottom and like the last spot, it was polluted with skippers. I blew through sacs in no time and ran out around lunchtime. I should tied more last night, but I do hate the long and tedious task of tying them. On the way home, I gave two thumbs to the working stiffs that were anxiously waiting for Saturday morning. 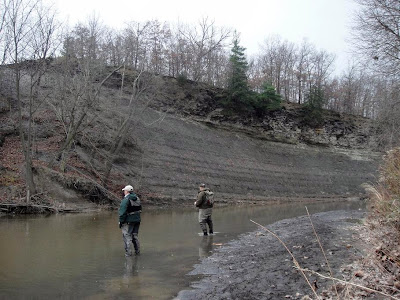 The plan for Saturday was the same place. One person that tagged along was Michael from Germany who comes to Ohio on business twice a year. Micheal is an avid angler in his home country and when he was in the Cleveland area several years ago, he stumbled onto Erie Outfitters. He was interested about fishing for steelhead and the owner of the shop Craig helped him out. He asked one of his good friend who happens to be a fishing friend mine. Saturday morning we drove east and the game plan was to lock up one pool near a popular spot. Locking up a pool involved getting up fairly early. Conneaut on the weekend is a bustling place especially during the month of November. We arrive while it was still dark and we could several anglers gearing up. When they spotted our 3 vehicles pulling in, they dressed with a sense of urgency. I was surprised that they didn't grab all their gear and race to the 20 hole. I wasn't terribly worried because I mentioned they would hit the 20 hole. Sure enough, they were at the hole and they probably wouldn't budge an inch.

We moved up the spot that I was fishing yesterday and we staked our claim. We were spaced out accordingly and made sure that nobody would be able to squeeze in. The water had cleared considerably from yesterday. The fishing was slower, but we all caught fish. The was hot and cold and I suggested that we head to the other spot. As we walked out, there was about 20 cars scattered along the road. We pulled into the next spot and it wasn't hard to figure out what type of angler was fishing. There was a Prius, Subaru, and a Toyota Highlander. All of them were plastered with Patagonia and Trout Unlimited stickers. Foreign cars and high priced outfitters manufacturers logos are associated fly fishermen. Nearly every fly fishermen I know, drives a Sabaru Outback. Pinners on the other hand other usually drive a pick up or a beater Jeep like me.

We hit some fish out of one hole and I could see two people fishing upstream. This was a spot I didn't fish the day before. The one angler greeted us and we started fishing, only hear the other angler way up start complaining about us fishing between them. We looked at each other puzzled. Ask anglers their definition of low holing and you'll get answers ranging from 10' to the entire length of a football field. This curmudgeonly loser was 50 yards upstream and he thought we were too close, I say Mr. Magoo needs to get his eyes checked. Of course, we could of been assholes and walked up started fishing in his hip pocket. His pissing and moaning session, thankfully was short lived. The morning crowd probably worked the hole over and we the left the miserable crank alone. 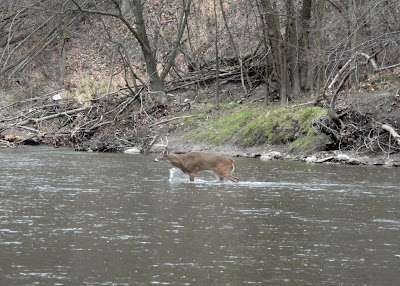 Sunday we fished the Vermilion as Micheal was heading back to Columbus later in the afternoon and flying back to Germany on Monday. The Vermilion is the westernmost river that gets stocked in Ohio. I was ok with it because I getting tired of making the long drive out east was putting a hurting on my sleep and wallet. The Vermilion was 20 miles from my home in Rocky River. The lower section of the river is a mess as there's plenty of pools and holes littered with lumber. But the river does have plenty of deep holes that steelhead love to hide. But it has one major problem, it runs dirty. Years ago it never had that problem and nobody knows why. Some point at the runoff from agriculture as there's plenty of farms farther south. The Vermilion can be a river that runs hot or cold. Today it was running frigid cold as we hooked into 3 fish. We bounced from hole to hole and there's no action. When we returned to the cars, I was waffling on whether to go home or continue fishing. Mike on the other hand wanted to cram in as much fishing as possible. I don't blame him and I told him we could fish the Rocky, but it was going to have to play nice with others. However it was already pass noon, so most of the morning crowds was gone. But I still had some cards in my hand and knew where to find fish. I took Mike to several spots and we caught some fish. The only excitement was when we watched 4 female deer running across the rivers and then a large buck following briskly. Another buck wanting to cashing in tried to head off the other by crossing further down. I gave Mike some pointers for tomorrow and wished him luck and safe trip back home.