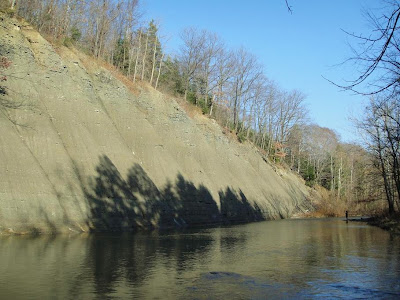 Steelhead Alley has its own version of Black Friday. Just like shoppers that cringe at the thought of people beating one another just to get the 3 laptop computers listed at $299.00 or freezing their ass off waiting in line for hours. The same can be said about the streams the day after Thanksgiving when everybody needs to escape from the in-laws or the kids. The streams are packed and this is the reason why I often skip the day after Turkey day and sleep in.

Since all of my family lives in Canada, I can stay out as long as I desire on Thanksgiving. During past turkey day outings, I've often thought about my fellow steelheaders trapped at home with their mother-in-law, going to different grocery stores looking for that certain brand of cranberry sauce or entertaining 10 kids. I'm sure all of them were wishing they were on the river. The mornings might be crowded as some get a pass to fish for a few hours. By noon, most rivers are vacant except for a few souls. It's refreshing to have an entire river to myself and after a long day, I was the last person to leave.

A couple days ago we received rain that bumped the streams up. I was more than happy because I'm off all of next week and the other bonus is both Ohio and Pennsylvania's deer hunting season starts Monday. Wednesday night I watched the flow gauge on the Elk start to creep up into that "it might blowout" zone. All of Ohio's streams were still too high to fish, so it was across the border we go. Since the others could only fish in the morning, we drove separately as I wanted to stay longer. The drive took longer than expected because the others weren't as lead footed as I was. The cruise was set at an annoying 65mph. I groused for a little bit that other people would be on the water by the time we got there. 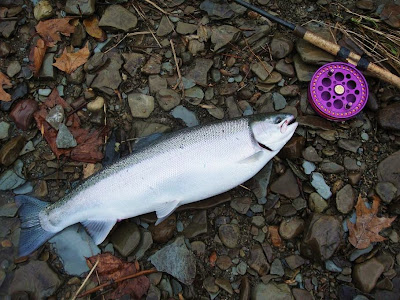 However, when we pulled in at first light, nobody was there. We walked down and the creek was dirty and somewhere in that murkiness, there might be a lot of fish. Usually in Pennsylvania when the water comes up, a boatload of fish will come in. The guys fished near the first access and I wandered a bit downstream. The spot I fished cut hard into the shale wall that ran about 50 yards. Off of the main current is where the fish usually hold. Sure enough, that's where they were. It wasn't deep, maybe 3' but deep enough to hide them. It was a mixed bag of fresh and older fish. Once in a while, I would look upstream to get the others attention to see if they wanted to move to new water. We gradually moved downstream and started banging fish in every spot.

As I've said in the past, nothing beats an uncured egg. There is something about an all natural egg. Curing eggs is an exact science. There's plenty of guys who swear to about their own personal cures. I heard all about the borax, brown sugar, anise oil and so on. There's one guy who I jokingly refer to Colonel Sanders because he has that secret recipe of 11 herbs and spices. His cured eggs work very well much to the chagrin of others. He would rather die than give up his secret recipe. I, on the other hand, am not the mad scientist type. Salmon eggs are hard to come by for me, so I'm not the type to experiment and hope that the latest batch works. Uncured eggs do have limitations. They don't last as long and you have to replace them after several drifts. The only cure I use is Flashcure. I've found out that uncured eggs can last about 5 days before they start becoming foul in odor. I simply put the sacs in a ziplock bag and sprinkle on some on. I simply shake the bag and throw them in the fridge. 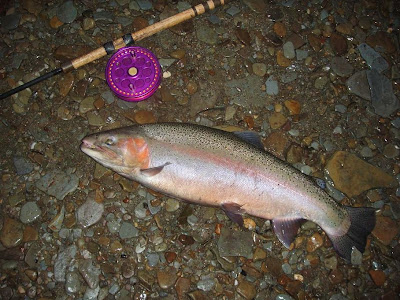 Today, my eggs are outfishing everybody. To the fish, they're little nuggets of crack. It was a hoot when I placed a fresh sac on the hook, cast out and watch the float go under. I watch the others floats go by and then I cast out and pop goes the float. Dave demands that I stop hoarding my eggs as it was the day of giving. I begrudgingly gave in and tossed him one sac. Sure enough, he hooked into a fish and I just chuckled as I handed him another. The pools and run give up plenty of fish. But the good times must come to an end.

Around noon, the others had to leave and I wished them a Happy Thanksgiving. I see them head upstream and gradually disappear around the corner. I start to wander downstream and plug away. Nearly every spot, no matter how big or small, gives up fish. I look downstream there's not one person out. The only thing that keeps me company is a couple of chickadees, chattering above me. The number of fish continue to pile up as I'm well into the double digits. I've probably landed well over 50 fish, but I notice I'm down to 6 sacs in my last jar. I decided to fish one section of fast water running along the bank. The bubble line tells me where to cast. I use up the last of my sacs fairly quickly.

I start the long walk back. By now, the guys are probably home enjoying time with their families. I do get a sense of sadness that I when I return home, it will leftovers in the fridge and I'll watch a football game. As I walk back, the creek is a very quiet place. That quiet will be replaced tomorrow by boisterous voices and sounds of boots over the rocks as anglers race to their favorite spots. As expected when I cross over, I see my Jeep and it's the only car left. I undress and quickly head up the hill. By the time I get home, it will be dark.

As for tomorrow, the Elk will be the Alley's version of Black Friday. As for me, I'll be in bed getting some much needed sleep.
Posted by Greg at 9:48 PM