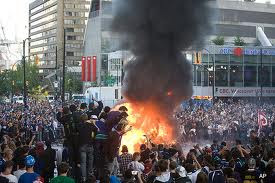 Another hockey season has come to an end and thankfully the Canucks got the living shit beating out of them by the Bruins. I had the Bruins in the seven and if there is one city that I despise, that is the smug, self absorbed, shit hole called Vancouver. The Canucks were lucky in the first two games as they scored with less than a minute in the first game and 30 seconds into overtime the second game. But, what shifted the momentum was the hit on Horton by Rome. The Bruins were pissed at what many thought was a dirty hit. After that they basically man handled them and to rub more salt in the wound they won it on their turf.

There is plenty of blame to go around why the Canucks lost. The Chicken Swedes aka the Sedin sisters basically disappeared. My 13 year old nephew could rough the both of them up. Alex Burrows thought he was playing soccer because he dived on every hit and nobody knew what Roberto Luongo would show up, the guy who posted a shut out or let in goals at a record pace.

As expected some of the Canuck fans didn't take losing the cup well. As they did in 1994, after losing the finals to the Rangers, all hell broke loose as thousands on the streets fueled by alcohol and stupidity destroyed the downtown. They left a path of destruction and humiliated an entire nation. Way to stay classy Vancouver.