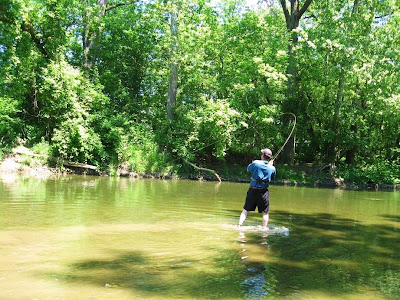 The tell tale symptoms of steelhead withdrawal are starting to show - constantly looking at the calender, heavier drinking and kicking small dogs. The past steelhead season seems like a distant memory and we're only into mid-June. I try to make summer go a little faster, the problem is, there isn't enough work to make it go faster!! I often sit in my truck like a zombie listening to my worn out Rush's Moving Pictures cd. With any recession, Ohio gets between the legs and a lot of folks are being tight with the money and I've been a penny pincher of late. I keep looking at the calender - July, August, September and my head starts to spin. Thank god for carp because I would probably would of hanged myself. 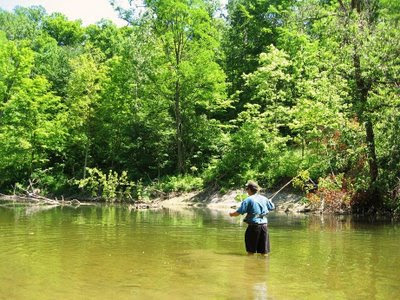 Unfortunately carp can be assholes and this past weekend the majority of them took pleasure in taunting me under the logs and trees. Usually I'll find some carp feeding and I often use my nymph patterns. But there are times when I have to coax them into coming out and play and that's where a baggie of corn comes in. A couple of weeks I tied some flies that resembled kernels of corn. I had some light yellow McFlyfoam and figured why not let's try it. I brought along some corn started carpet bombing the pool to get them fat pricks to come out. Slowly but surely they ventured out and there were a couple of biggies in the range of 15lbs that cruised along the bottom. Being the big game hunter, I set my eyes on 2 monsters. I watched them probe the bottom sucking up the kernels and I made my move. A short cast and a quick mend and I watched the fly slowly drift downstream towards one of them. The fish rose slightly and inhaled it and quickly bolted after I set the hook. This fish ripped off almost 50yds of line and I was into my backing quick. After one long run and I simply started hauling him back upstream only to have the hook pop out in front of me. I figured he probably tipped the scales at 15lbs. I bounced along the river looking for players and I was kept busy for most of the afternoon. 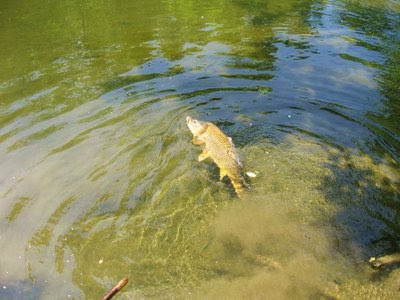 Hoping we get to make the trip to Indiana this August for Skamanias and I hoped Bubba's fishing gear got sent to Moose Jaw instead of Saskatoon. I'm sure he'll rub in his fishing trip at Wollaston Lake and make me turn green with the endless pictures of 40" pike and 20lbs lakers.......
Posted by Greg at 10:26 PM

Not that is time well spent...
Fall is just around the corner or if you really can't wait they were still hitting steelies in the St Mary's last week.

Now that is time well spent...
Fall is just around the corner or if you really can't wait they were still hitting steelies in the St Mary's last week.

"Though his mind is not for rent
Dont put him down as arrogant.
His reserve, a quiet defense,
Riding out the days events.
The river"
...rock on